The US ISM figure was below expectations yesterday at 60.7 vs 65 expected. Supply disruptions weighed on the figure and as inputs become hard to source, the inflation pressures are clear.

Moreover, Fed member Kaplan on Friday said that signs of excess risk-taking in financial markets show that it's time for the Fed to start debating a reduction in bond purchases. However, Kaplan isn’t a voter this year.

On the coronavirus front, the divergence in the global recovery from the virus is becoming stark. US cases rose at their slowest pace since the start of the pandemic whilst daily deaths in India hit a new record of 3,689 on Sunday. In addition, Europe is easing restrictions whilst Japan’s Hokkaido asks the government to apply virus measures. On the bright side, vaccines clearly work so the pace of roll out will be important to close this gap.

In Australia this morning, the RBA kept rates unchanged as expected. The RBA will release quarterly statement on Monetary Policy on Friday which will update growth and inflation forecasts.

Focus now shifts to the BoE on Thursday. No changes to policy expected, just some upward revisions to growth forecasts.

Finally, the month end brought back US Dollar demand on Friday, whilst expectations remain for a USD sell. There is generally positive May seasonality for USD after negative seasonality in April. This is particularly consistent for GBPUSD 11yr avg +1.62% in April (rising 9/11 years) and -2.23% 10yr avg for May (falling in all 10 years so far).

With Scottish elections due on May 6th this could be particularly interesting this year. SNP are likely to win a majority and pursue a Scottish Independence referendum, but it is not easy for them to get one. Long USD across this month is our preferred strategy as we expect the rally back from last month’s weakness to continue. The US economy is still set to outperform as the US opens up its economy ahead of most of the world.

Trade idea: EURGBP has been testing 0.8721 on the topside a few times now so watch for a break of that level for GBP selling to gather momentum. The market is long GBP so there is plenty of room for any sell off to build momentum.

A less-than-expected ISM manufacturing PMI print helped cool-off Fed tapering fears and boost risk sentiment, which in turn allowed the Euro to rise modestly against the US Dollar, following last week’s bearish drop from 1.2150 to less than 1.2025. However, Europe’s single currency failed to print above the 50-period moving average acting as resistance, and therefore we expect retest of the 1.2025 support. 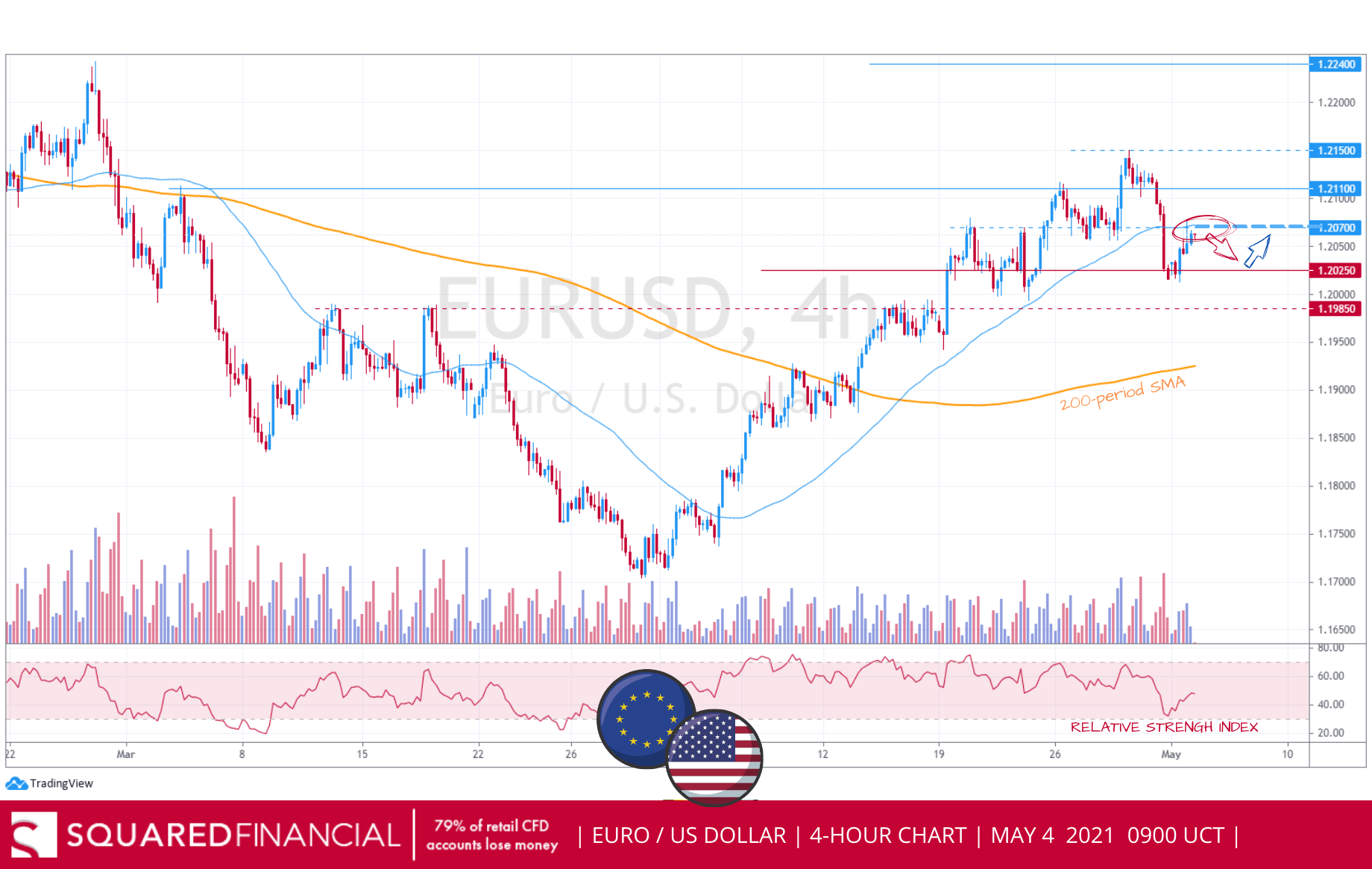 The British Pound accomplished an impressive turnaround surging back above the trend-defining 200-period moving average. Although the GBPUSD pair is dropping again in early morning trade today, bullish technical formations are still intact as we expect Sterling to continue gaining ground against the US Dollar ahead of the BoE meeting on Thursday May 6th. 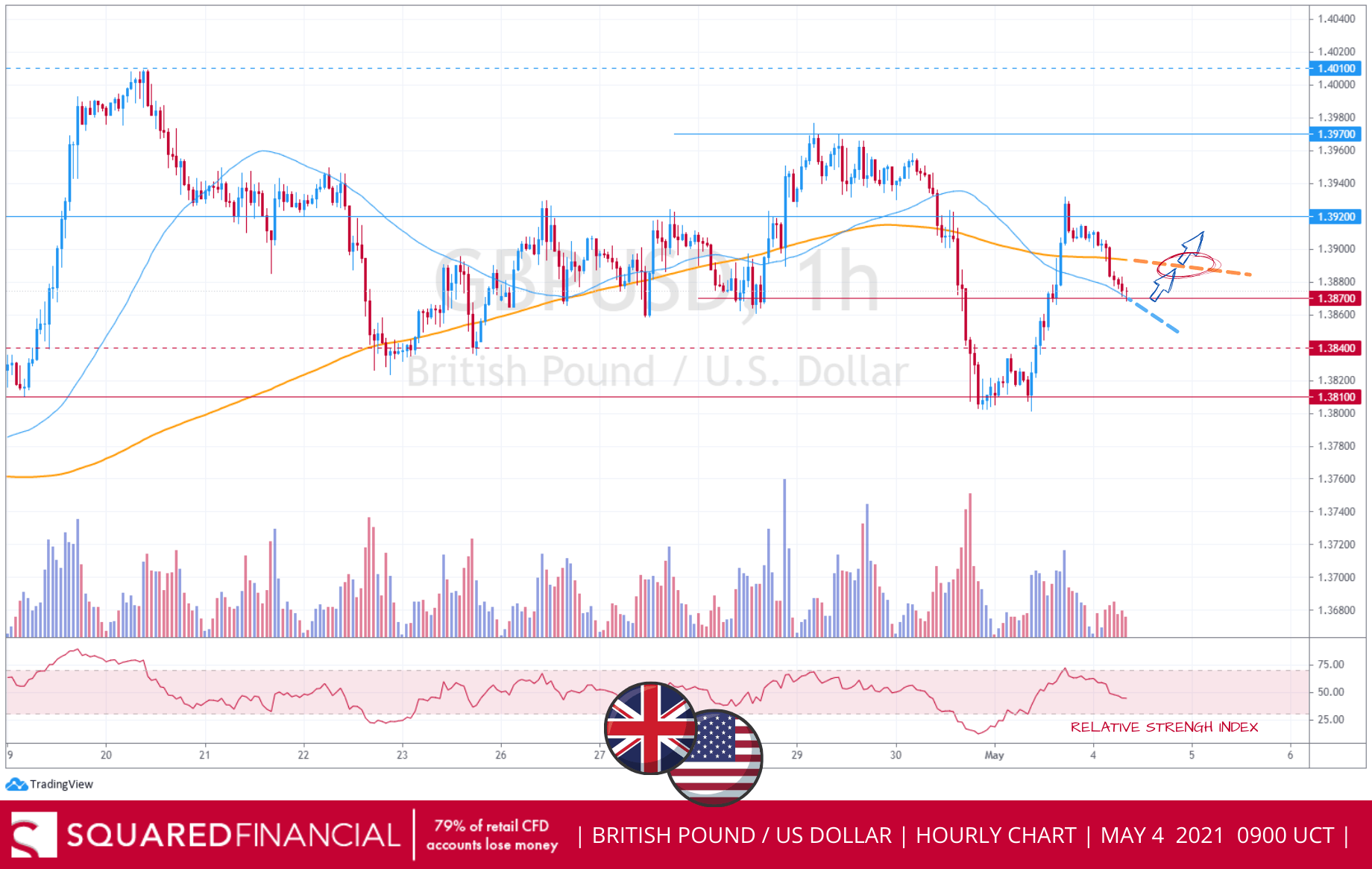 The ¥109.05 support still looks strong on the H1, however a surge above the ¥109.35 resistance coinciding with the 50-period moving average is needed to attract more bullish interest. Today is a Bank holiday in Japan, and therefore we’re not expecting to see much movement in the USDJPY. 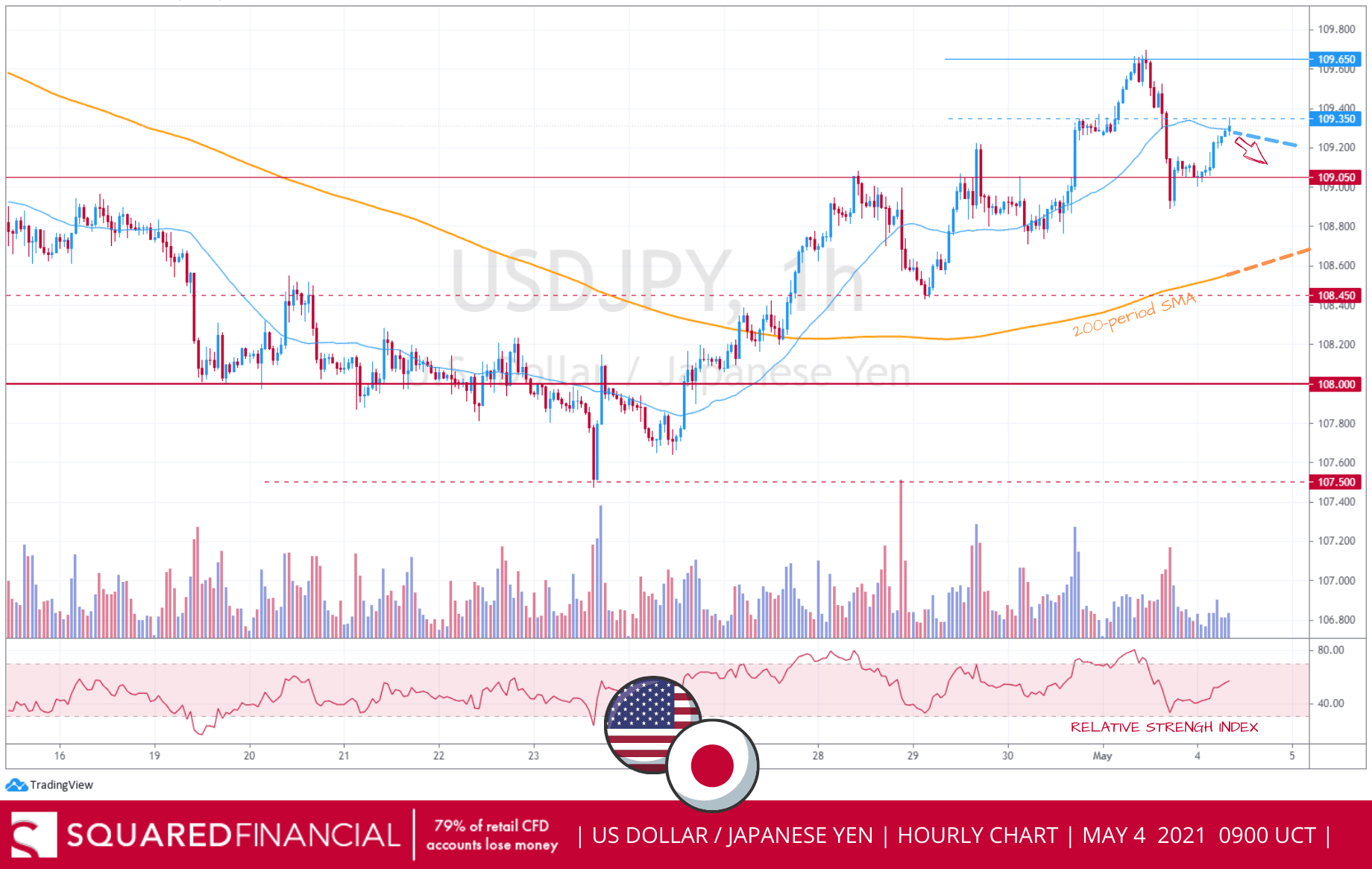 Investors continue to monitor the Covid-19 health crisis in India, after the World Health Organization said things will get much worse before they get any better. However, UK futures are slightly higher this morning after Britain signed a £1 billion trade deal agreement with India, which PM Boris Johnson says will create more than 6500 new jobs. A sustained move above the 7000 level is needed to trigger more upside interest ahead of UK manufacturing PMI figures due later today. 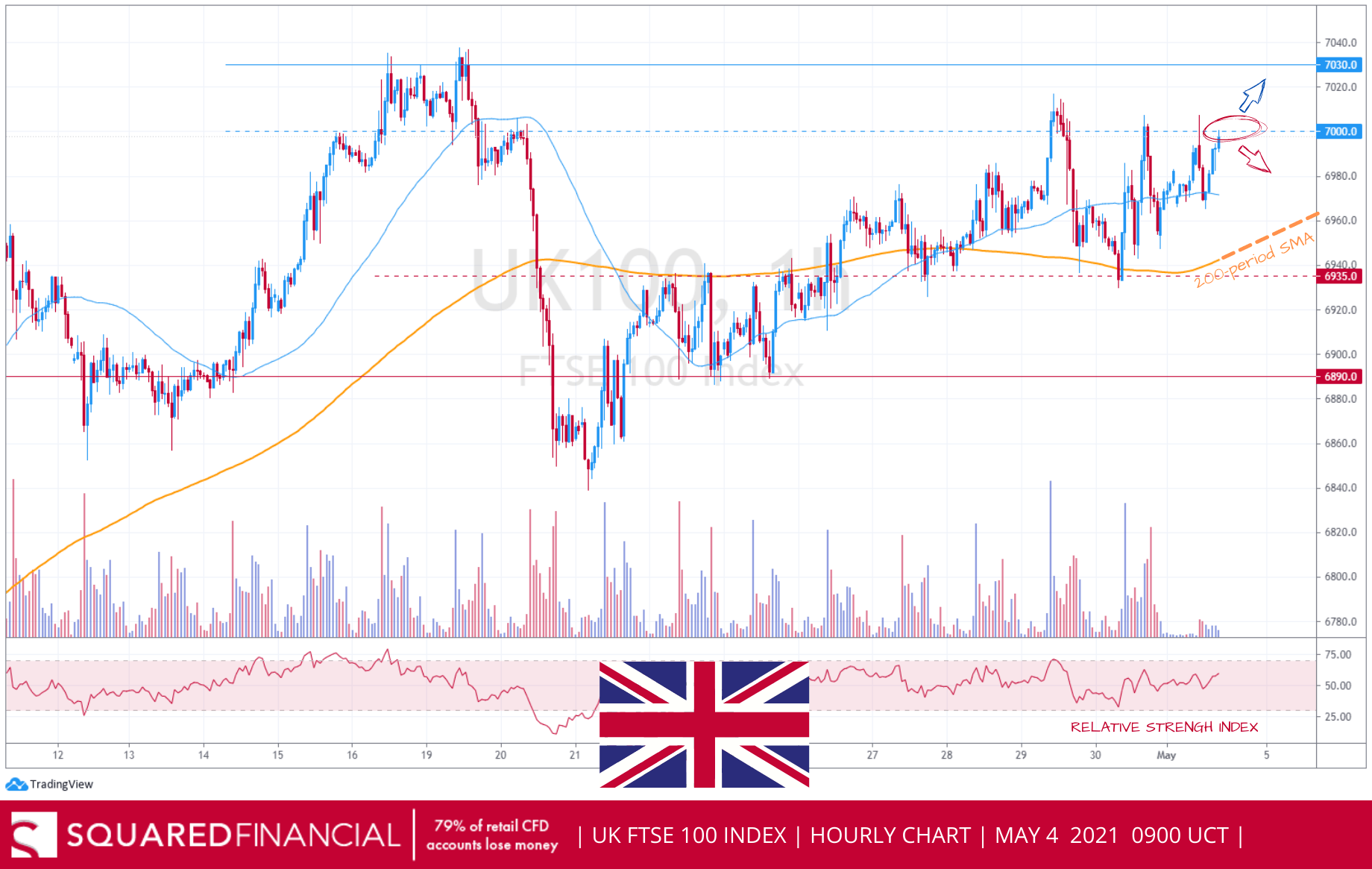 Wall Street ended mostly higher yesterday with the Dow Jones rising 0.7%. However, the ISM print raises some concerns over how strong the economic recovery in the United States really is, and therefore we expect this choppiness to continue ahead of the non-farm payrolls report due out this Friday, with analysts expecting the US to add nearly 1 million jobs on top of last month’s 916000 jobs gain. 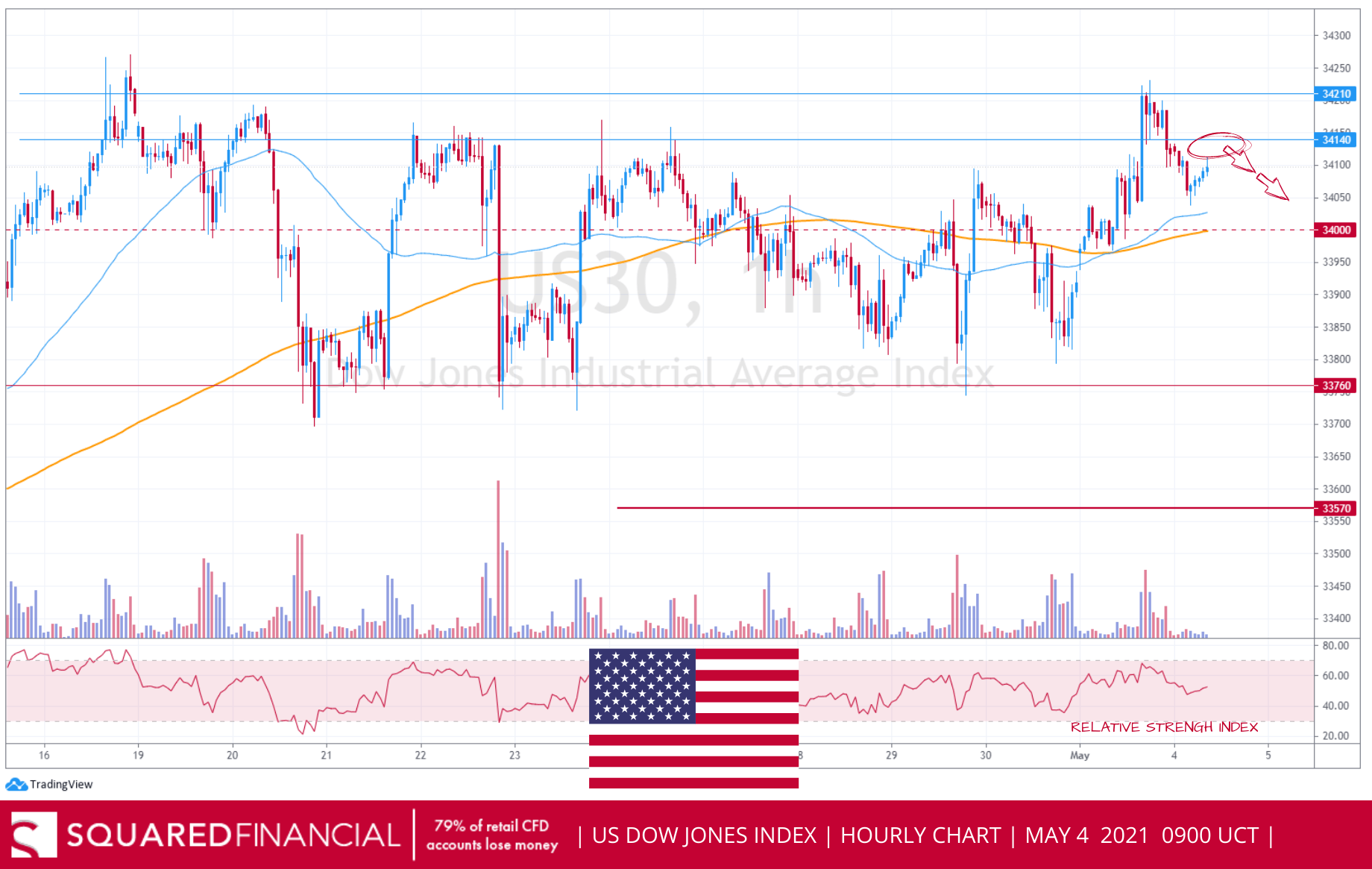 Gold surged significantly higher against a weakening US Dollar after a worse-than-expected US manufacturing PMI print that casted doubt over how strong the economic recovery really is. However, profit-booking is triggering a corrective slide lower with the uptrend to remain intact unless gold drops below the 200-period moving average. NFP on Friday will be the next catalyst to monitor. 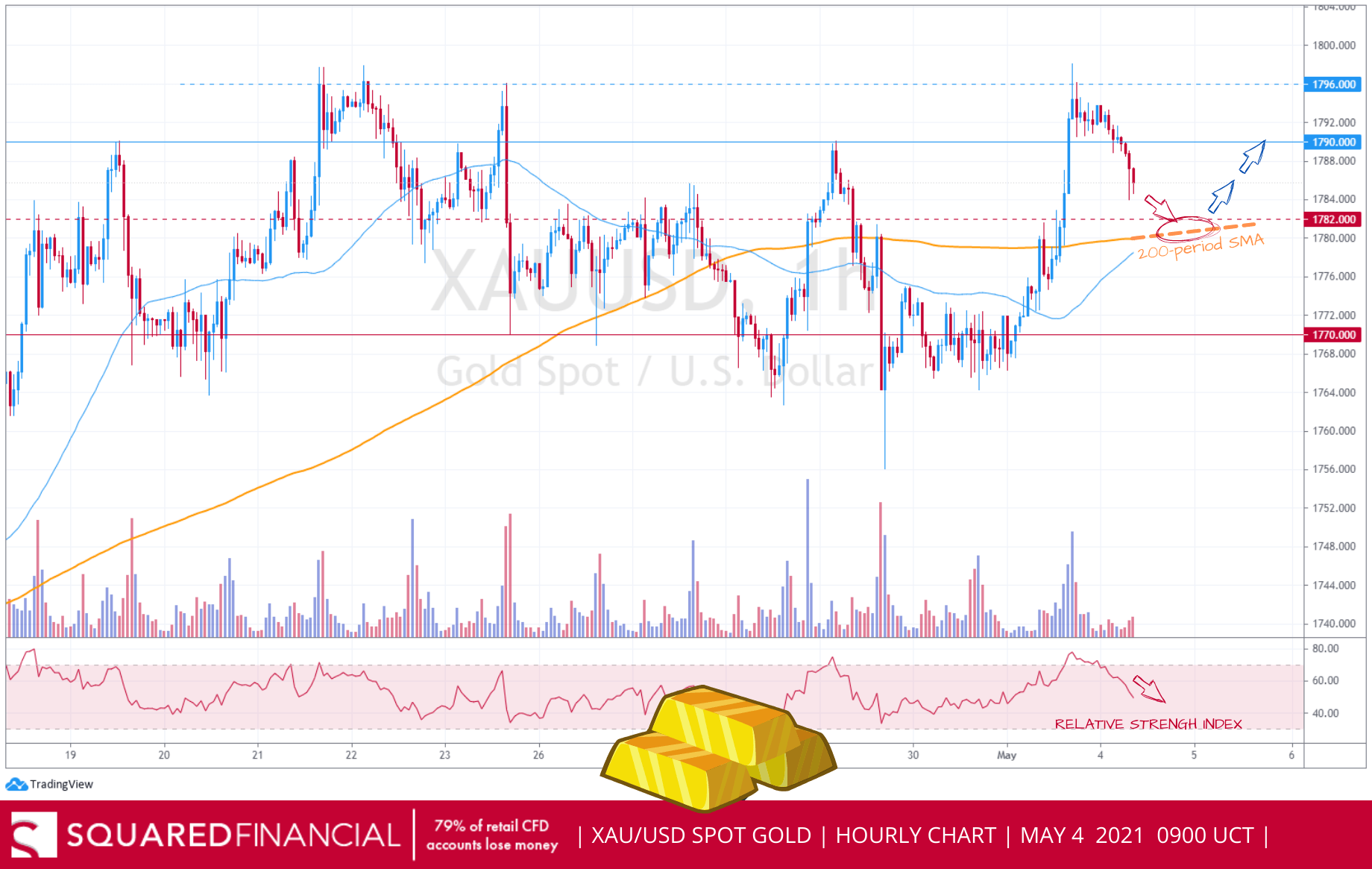 The recent crude oil rally driven by solid Chinese economic figures and an impressive vaccination rollout in the United States may come to an end following a weaker-than-expected ISM print, with a move below the 64.30 support level and below the trend-defining 50-period SMA, to trigger an acceleration lower, with the 200-period SMA around 63.30 as nearest downside target. 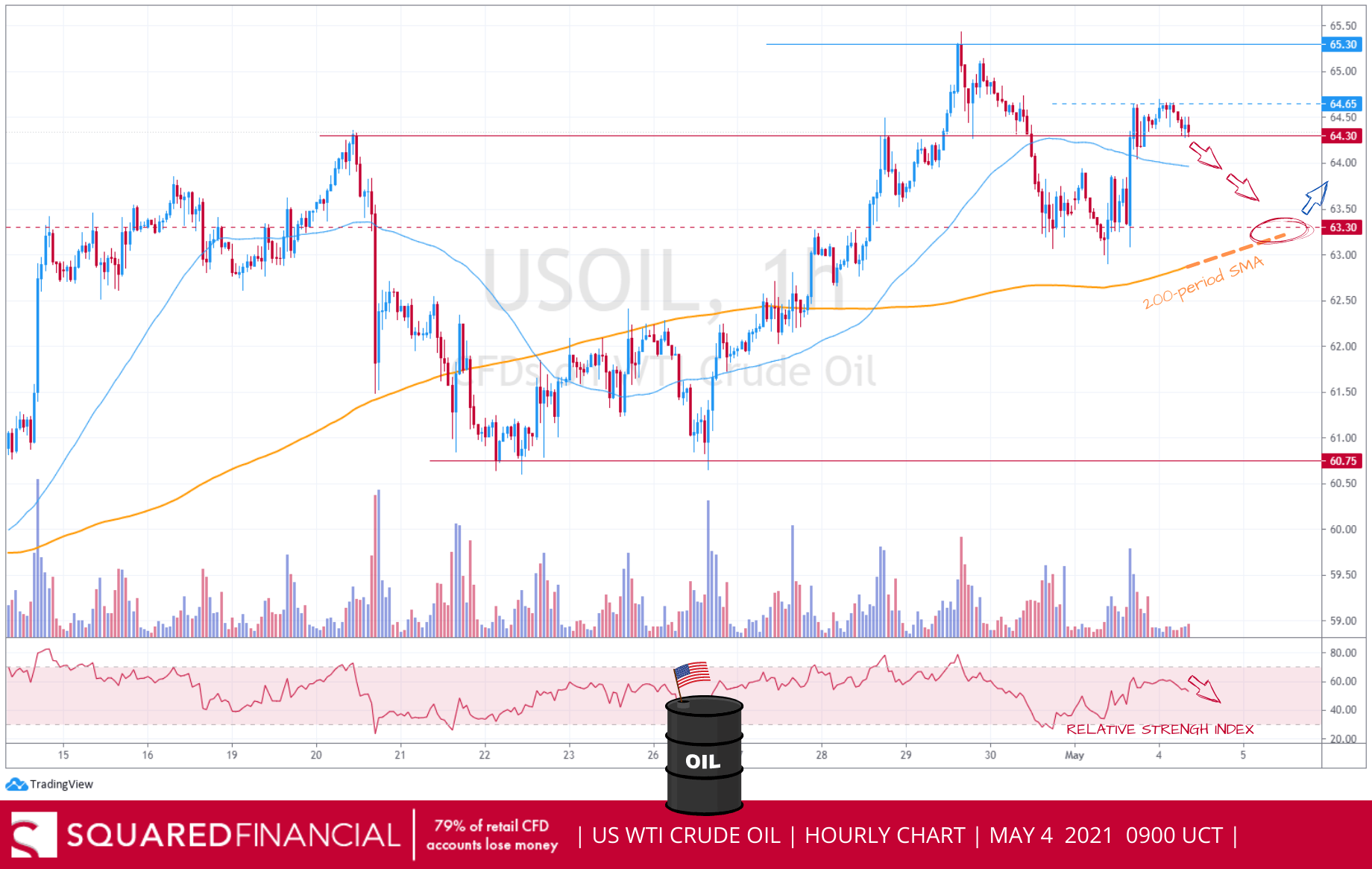 EUR/USD tumbles below 1.21 as US CPI smashes estimates

EUR/USD has tumbled below 1.21 after Core CPI came out at 3%, far above 2.3% projected. The robust figures may hasten the Federal Reserve's tightening.

GBP/USD has  extended its decline after US CPI beat estimates with 4.2% while Core CPI came out at 3%. Earlier, UK GDP beat expectations with -1.5%. Volatility is rising.

XAU/USD tests $1,820 as USD capitalizes on US CPI data

The XAU/USD pair fluctuated wildly in the early American session as investors assessed the latest inflation report from the US. After spiking to a daily high of $1,843, the pair reversed its direction and dropped to $1,820 area.

Top 3 Prediction Bitcoin, Ethereum, Ripple: BTC may drop to $34,000, taking the rest of the market with it

American consumer prices are set to rise by the most in a decade as the base effect from last year’s pandemic collapse reaches its height. The Consumer Price Index (CPI) is expected to climb 0.2% in April.