Outlook: Despite the recovery move in US equities, risk appetite is waning a bit–see the peso. One likely cause would be the IEA report due tomorrow that will spell a bleak winter for Europe, one in which Russia has cut off all energy supplies. The recent supply cut may be a “precursor to further cuts as Moscow looks to gain ‘leverage’ during its war with Ukraine.” This suggests Russia would be negotiating and we have no evidence of that, but never mind. The IEA is pretty smart.

Keep the nuclear facilities open, it warns (Berlin is not listening), and fire up old means of energy production, even coal. Rationing will be needed. “Sweden and Denmark on Tuesday followed Germany, Austria and the Netherlands in announcing the first stage of emergency plans to preserve gas supplies, but none of those national plans yet include rationing.”

Of the dozen of so implications of this forecast, for the FX market we have to name a far worse slowdown in output than in the US as whole factories shut down for lack of fuel. Don’t sell that old Mercedes just yet. Then there are the obvious things like inflation and public unrest/civil disorder, but we suspect that as usual, the biggest effect will come from left field and we don’t yet know what it is.

What is the probability the energy crisis drives Europeans away from support to Ukraine? Not zero, alas. German Chancellor Scholz’s foreign affairs advisor dismayed with a comment about relations with Russia after the war being as important as arms to Ukraine today. This is patently true so it’s a ruckus and on the front page of the FT because it’s politically incorrect to assume Russia as anything other than utter pariah. Meanwhile, a major political party in Italy busted up over Ukraine, too. Will Europe wimp out? The probability is not zero.

The other market-mover is a set of speeches by Feds, three of them today, plus Fed chief Powel testifying to the Senate Banking Committee. Aside from the usual stuff about how the Fed can’t “manage” inflation from the supply side, critics will be on the lookout for any sign of labor market cooldown. After all, the consumer is two-thirds of the US economy and the tight labor market is driving up (some) wages as well as many prices. A great unknown is exactly how the Fed will provide support for the housing market. The US is not alone. In fact, the US is 7th in line for worst conditions in the housing market, according to Bloomberg. New Zealand wins that one. See the table. This could be the drag on the NZD that makes it one of the bigger losers these days.

On the whole, Powell should be slippery enough to get away with predicting the landing can still be on the soft side, with some outlier unhappy events like the housing market and wages increases coming to a screeching halt. Members of Congress already have houses and paychecks and won’t care. They do care about the S&P.

If the risk-off scent we detect rising up, the dollar should benefit. Of all these concerns, we are most frightened of the IEA story. The price of American bread pales in comparison to no grain for Europe and no oil or gas to heat the oven. 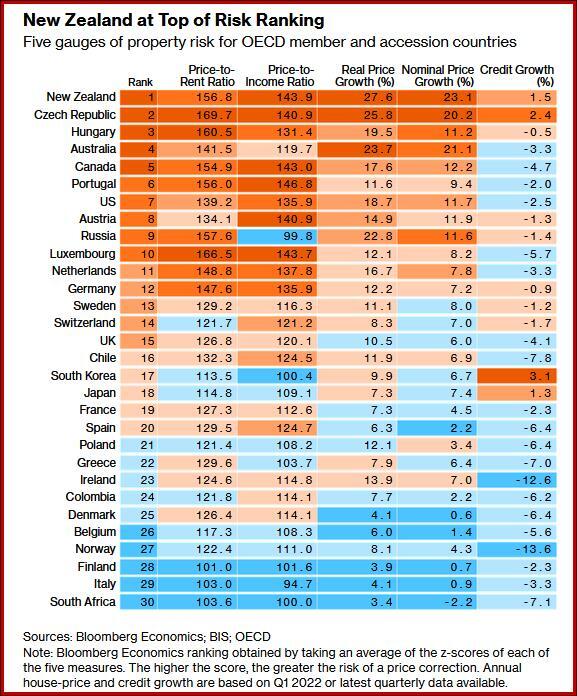