Market Summary: The S&P 500 finished the day down -0.01% (IVV). The best performing asset class were broad commodities as the Fed's liquidity injections and repo operations created a move down in the U.S. dollar (remember dollar down = commodities up). The broad commodity index ETF (DBC) moved up 0.52%. Gold was also stronger on the day, finishing higher by 0.41%. 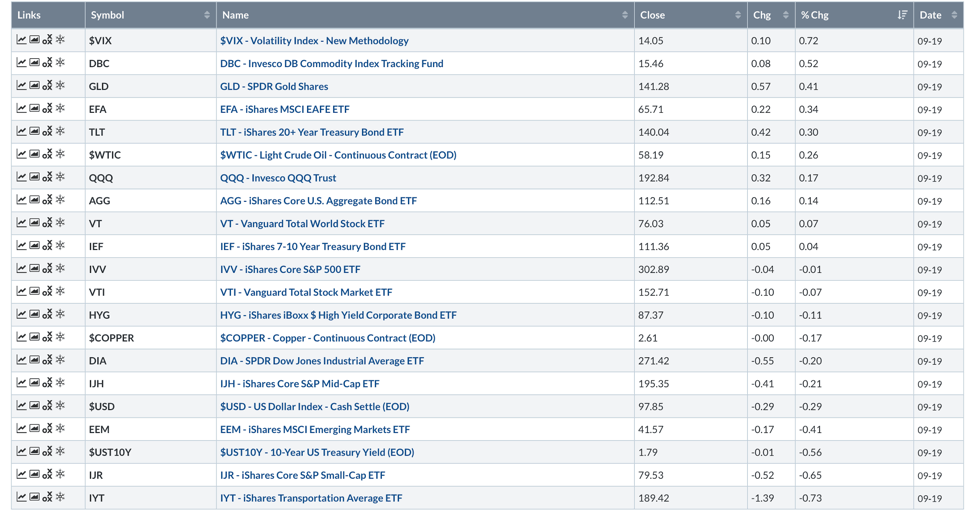 Economic Update: Economic data came in better than expected yesterday. The Philly Fed Manufacturing index was reported at 12. This is still below the peak value reached in 2018, but an improvement from the lows reached earlier this year. Existing home sales picked up 1.29% month-over-month. This is the second consecutive data point from the housing market that marked improvement. Don't get us wrong, the data does not suggest that economic growth is accelerating. We are still very much in a growth slowing trend. 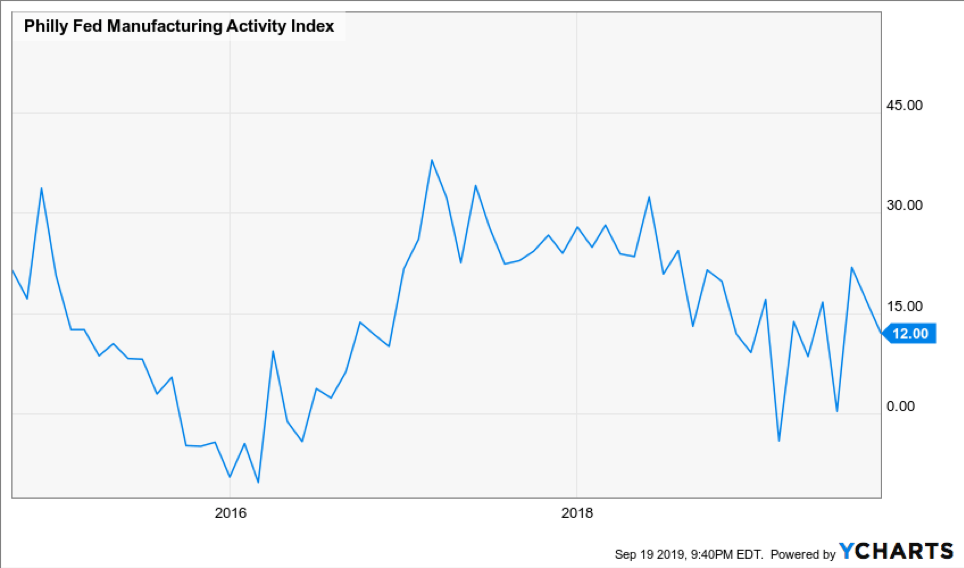 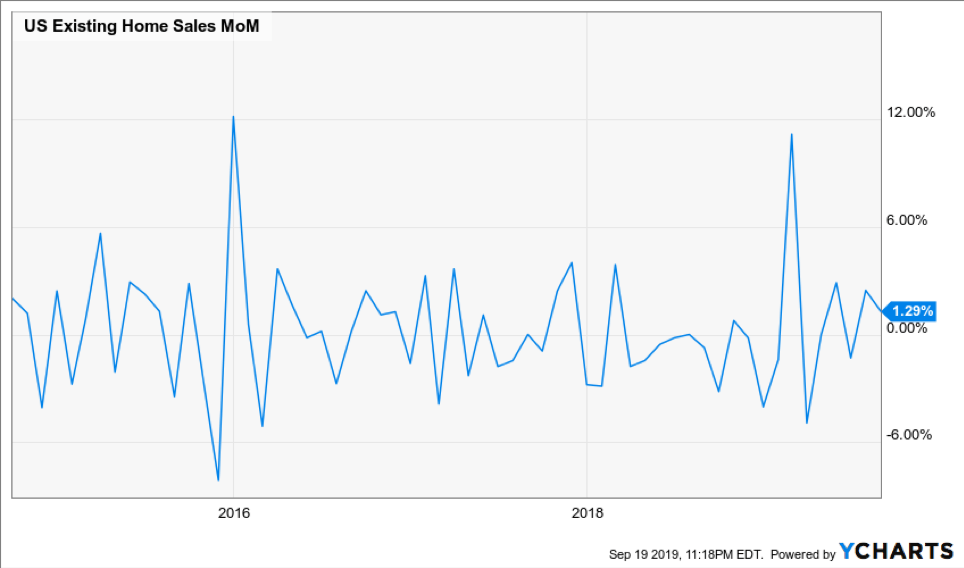 Commodities: Commodities were strong yesterday on a weaker dollar. We are watching commodities closely to determine if the Fed's actions in the repo market and their interest rate policy will create an inflation accelerating environment. With growth slowing, if inflation were to accelerate, the Fed would be in a difficult spot. If they continue to ease, it could result in further inflation. If they tighten to solve the inflationary issue, then growth could slow at an accelerating rate. Currently, there is nothing to worry about as commodities are still below the 200-day moving average and in a negative trend.

U.S. Dollar: Another key inflation indicator is the U.S. dollar. When the dollar is in a positive trend, the resulting environment tends to be in more of a deflationary trend. A falling dollar, on the other hand, tends to result in inflation. This relationship was seen yesterday as the dollar fell and commodities and other inflation sensitive assets increased. The dollar remains in a positive trend currently. A breakdown in the US dollar would signal a transition to a more inflationary environment.

Growth: The growth factor was the top performing factor yesterday. It has been one of the strongest factors over the past 12 months. It has corrected recently against the broad market, falling back to the rising 200-day moving average. Now the question is whether the correction is over for growth. A positive trend is indicative of growth outperforming the broad market. This has largely been the case since the beginning of 2017. Growth did breakdown last year, towards the end of September.

Japan is breaking out: Recent price action out of Japanese stocks is indicative of bullish sentiment among market participants. Japanese small cap stocks were up over 1.3% yesterday. They have recently broken above resistance and the 200-day moving average. This is a bullish sign in an otherwise bearish economic environment. Are Japanese stocks suggesting that more easing is coming? Is the BOJ (Bank of Japan) set to buy more equities and ramp up more stimulus? All we know is that the price action is setting an optimistic tone.

Utilities: The Utilities sector (XLU) broke to all-time highs yesterday and was the strongest sector we track. Utilities have been above their rising 200-day moving average since mid 2018, demonstrating a strong trend. Utilities did not break out to new highs relative to the S&P 500 today though. However, they remain in strong positive trend relative to the broad market. This remains indicative of a defensive positioning by market participants. 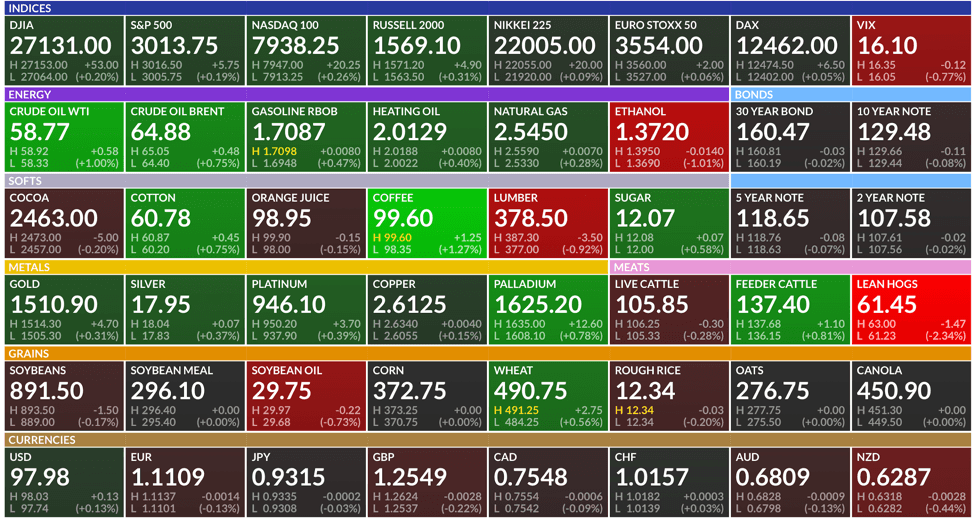 The Fed is under increased pressure to fix U.S. funding markets as it readies another $75 billion overnight repo operation today. This week's liquidity boosts calmed the market, but swap spreads fell to records yesterday, signaling waning appetite for Treasuries on concern traders won't be able to fund purchases through repos. Still confused? Here's a QuickTake on the repo market.

But stock traders may get a break on market liquidity at least for today. Quadruple witching, when options and futures on indexes and stocks expire, will spur trading volume as large derivatives positions roll over. The moves coincide with a rebalancing of the S&P 500 and tend to bring some of the busiest trading days of the year. Spikes in volume usually cluster around the open and close.

The Bank of Japan made sweeping cuts to bond purchases a day after saying it wants a steeper curve and won't allow a prolonged decline in yields. The bank lowered buying across three maturity zones by a combined 50 billion yen ($463 million). And China's central bank took another incremental step by reducing the one-year reference rate for bank loans in September.

Mark Zuckerberg had a constructive chat with Donald Trump at the White House yesterday in a bid to deflect criticism of Facebook's privacy practices. But some of his other encounters on Capitol Hill were testy as he clashed with Republican Senator Josh Hawley, who told him to sell WhatsApp and Instagram and build a "wall" between Facebook and its other platforms. Nope, said Zuckerberg.

U.S. equity futures and European stocks rose. Asian shares also gained, led by a 5% rally for India's benchmark after a surprise tax cut. Treasuries and gold were up. The dollar weakened. China's shares and the yuan got a mild boost from a cut in borrowing costs. Oil rose.