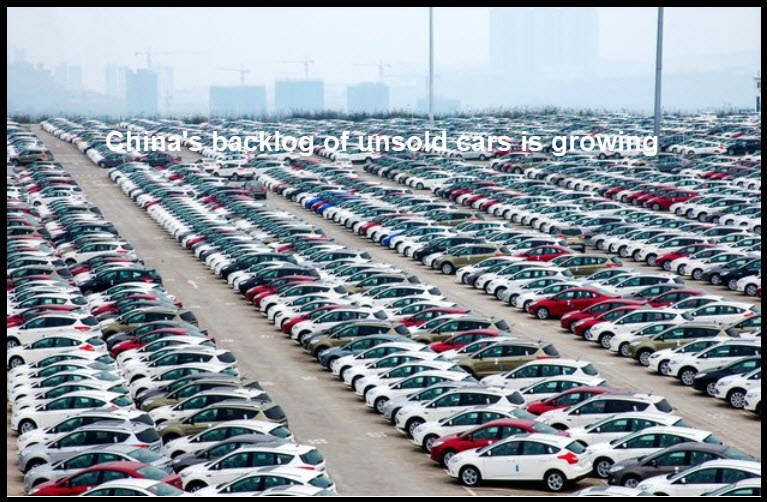 [The following was contributed by  Farmer, a subscriber from Nairobi who is active in the Rick’s Picks chat room.]
Of all the lies we read reported without question by the news media, one of the most egregious is that of China’s GDP is still running hot at over 6% annually. It’s an astonishing number for such a large economy and even more incredible during a global economic slowdown. With semiconductor sales crashing, alarm bells being rung by courier companies and freight, and China auto sales crashing as a backdrop during a trade war, we are being treated to fantasy GDP prints of current and expected growth over there that border on the absurd. All good wars are fought with propaganda of course and this one will be no exception. But for those with a background in economics, we would be remiss to ignore the close correlation between falling auto sales and recession and therefore between general retail consumption and economic slowdowns.

Such statistics are maintained in developed countries just for the purposes of their ability to predict contractions. So given what we do know about the Chinese auto markets we can infer quite a bit about the consumption patterns that are currently in play. And we can easily conclude we are being fed a load of bollocks when related statistics are coming up sunshine even as known (and provable data) on imports and exports declines are now nearing double digits. There is not going to be a consumption-led recovery in China during a marked manufacturing decline and widespread job losses. On the contrary, there will be signs of panic and rising credit distress, which I might suggest is already taking place, and it will become acute should Trump carry through with all the planned tariffs.

So hold your nose when you read those smelly GDP prints from China. Because those numbers are dictated by a Communist government that tolerates no dissent from its domestic news sources and statistics-gathering agencies.  This research conducted a year ago when the economy was objectively doing better, has shown a relationship between satellite imagery of night lights and the exaggerated GDP reports in countries with dictatorships.Here is the report concerning China’s and Russia’s fake GDP.  Trade negotiations meanwhile may finally begin to yield progress as China shakes up its trade negotiation team and brings in its commerce minister, Zhong Shan, as well as an assortment of trade specialists.

We will recall it was not the U.S. who backed Mr. Xi into a corner during the discussions but rather his negotiating team that led to the situation where he could not relent without losing face. The total failure of China’s trade team to properly assess the Trump Administration’s strength and convictions led them to squander the opportunity to cut a quick painless deal. With luck we will see adults back in the room and talks can move ahead without the childish antics we have seen to date. It is certainly in everyone’s best interest to find common ground as the obviousness of a global contraction becomes more apparent.

Gold edged lower through the early European session on Friday and is currently placed near daily lows, around the $1558 region.