Geopolitical jitters linked to the Russia-Ukraine war were shrugged off by market players, as shown by global equities rising. The Ukrainian advisor Podolyak said negotiations with Russia continue online constantly, but the mood changed after the Bucha events.

On Friday, the Russian Central Bank surprisingly cut rates by 300 bps, from 20% to 17%, as market players expected the central bank to stay on hold.

Elsewhere on Wednesday, the Federal Reserve revealed its March minutes. The Fed stated that most participants were eager to hike rates 50 bps if not for Ukraine. The Fed agreed to cap its balance sheet by an amount of $95 billion, $60 billion on US Treasuries, and $35 billion on mortgage-backed securities (MBS). Furthermore, the minutes showed that participants wanted the Quantitative Tightening to begin by May, following the May 4 meeting, where market participants, as demonstrated by STIRS, are pricing in an 88% chance of a 50 bps hike.

On Thursday, St. Louis President James Bullard said that the Fed policy rate was too low, by about 300 basis points. He added that the Fed is not that far behind the curve and expects the Federal Funds Rate (FFR) to end the year at around 3.5%.

Later during the day, Chicago’s Fed President Charles Evans said that the Fed would probably go to get neutral, setting by the end of this year or early next.

The USD/RUB upward bias was tested as the price broke below the 200-day moving average (DMA) at 78.3059. On Wednesday, it was noted that “a daily close under the 80.3254 level would further extend losses, and the USD/RUB could aim toward the 200-day moving average (DMA).” On Thursday, that happened, and a close was achieved at 79.2467, opening the door for a test of the 200-DMA. 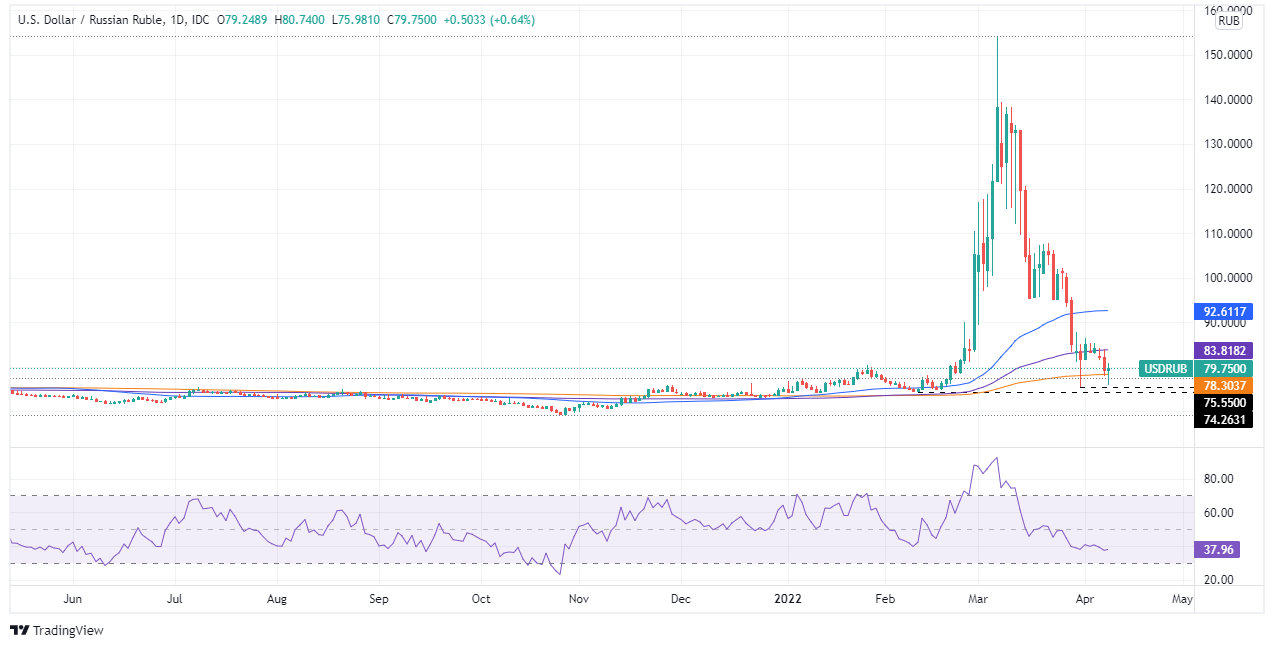