The USD/CAD pair built on the previous day's strong move up and gained some follow-through traction for the second consecutive session on Wednesday. The momentum pushed the pair further beyond the 1.2600 round-figure mark, to one-week tops during the early European session.

The US dollar staged a modest bounce from two-week lows, which, in turn, was seen as one of the key factor driving the USD/CAD pair higher. Bulls seemed rather unaffected by a positive tone around crude oil prices, which tend to underpin demand for the commodity-linked loonie.

From a technical perspective, the USD/CAD pair has now moved closer to a resistance marked by the top boundary of a four-month-old descending channel. The mentioned barrier is pegged near the 1.2625-30 area, which if cleared decisively will mark a near-term bullish breakout.

Meanwhile, oscillators on the daily chart have just started moving into the positive territory and support prospects for an eventual breakout. This, in turn, will set the stage for an extension of the recent bounce from multi-year lows, around the 1.2365 region touched in March.

Bulls might then aim to surpass an intermediate hurdle near the 1.2665-70 region and push the USD/CAD pair further towards the 1.2700 mark. The upward trajectory could further get extended towards the next relevant resistance near the 1.2740-50 supply zone.

On the flip side, any meaningful pullback below the 1.2600 mark might attract some dip-buying and remain limited near the 1.2575-70 area. Sustained weakness below will negate the positive bias and turn the USD/CAD pair vulnerable to retest the key 1.2500 psychological mark. 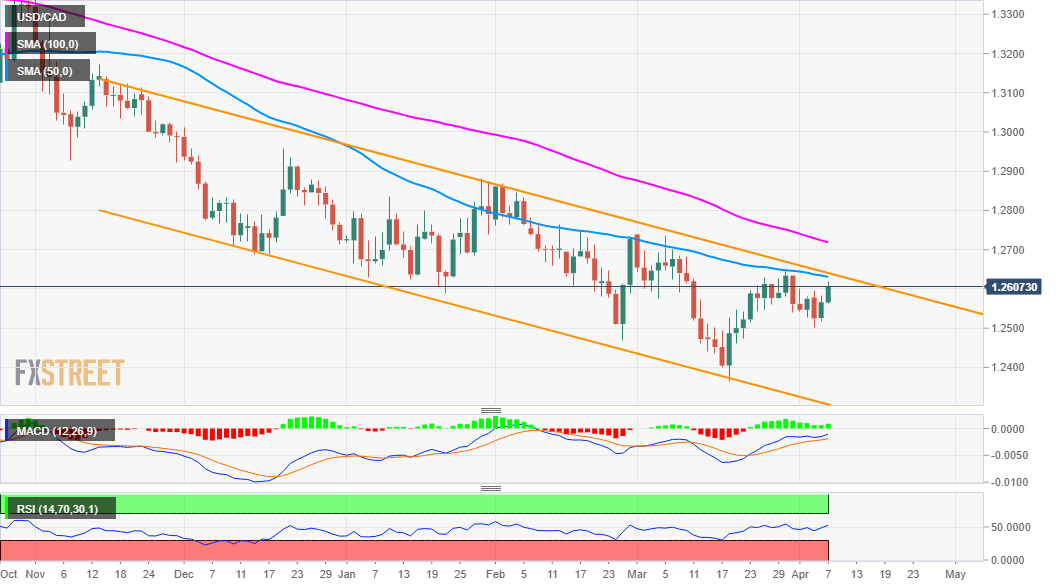