Silver built on the previous day's goodish rebound from the $25.85-80 support area and gained some follow-through traction on Thursday. The momentum pushed the XAG/USD to one-week tops, around mid-$26.00s during the first half of the trading action.

Bulls, however, struggled to capitalize on the move and the commodity, so far, held below the $26.60-65 strong horizontal resistance. The mentioned barrier also marks the top boundary of a one-week-old trading range and should now act as a key pivotal point.

Meanwhile, technical indicators on the daily chart maintained their bullish bias and have been scaling higher on hourly charts. The set-up supports prospects for an eventual break to the upside and an extension of the recent strong recovery from YTD lows.

That said, it will still be prudent to wait for a sustained break through the trading range hurdle before positioning for any further appreciating move. The subsequent positive move should assist the XAG/USD to aim back to reclaim the $27.00 round figure.

The upward trajectory could get extended to the $27.40 region, a resistance marked by an ascending trend-line extending from late March. Some follow-through buying will negate any negative bias, instead will be seen as a fresh trigger for bullish traders.

On the flip side, the $26.00 mark, followed by the trading range support near the $25.85-80 support now seems to protect the immediate downside. The latter also coincides with the 100-period EMA on the 4-hourly chart, which if broken might prompt aggressive technical selling. 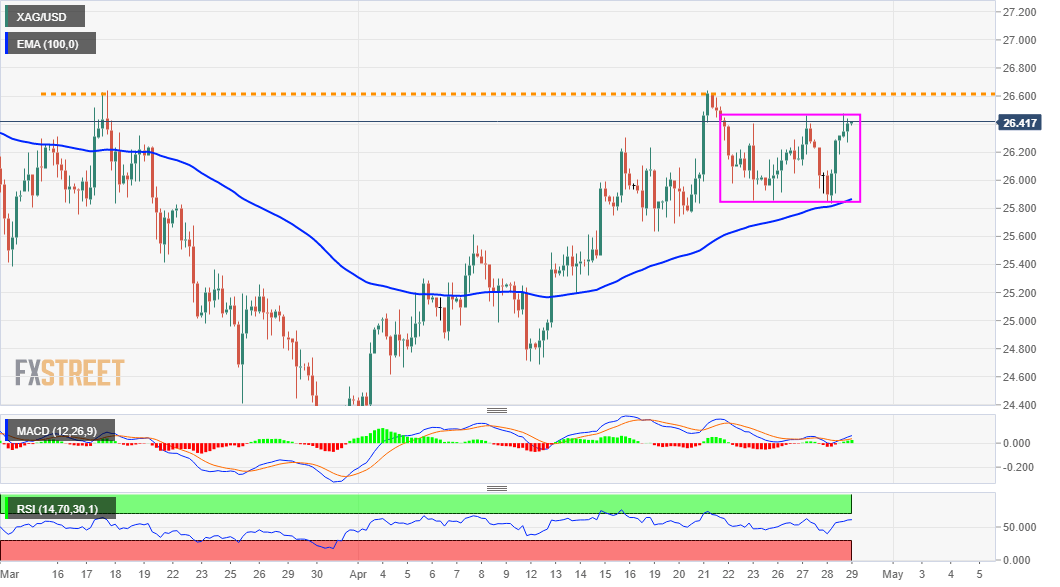