NYSE:QS has had an eventful start to its life as a publicly-traded company as the stock erupted up to $87.50 shortly after debuting, then, as IPOs commonly do, came crashing back down to Earth. On Tuesday, shares gained 10.87% to close the trading session back at $62.20 as the early volatility for the stock continued. The bullishness on the electric vehicle industry has reached a fever-pitch as the incoming Biden administration has already pledged its support for clean energy alternatives as a focal point for its first four-year term.

The boost to Quantumscape’s stock came in the form of proposed changes for automakers as the Alliance for Automotive Innovation put forth its suggestions for the incoming Biden administration. These points included incentivizing research and development, modernizing regulations on advanced technologies, and supporting new investments in manufacturing infrastructure. All of this led investors to put two and two together as the higher production and demand for electric vehicles in the United States will inevitably lead to higher production and demand for batteries, which is where Quantumscape comes in. 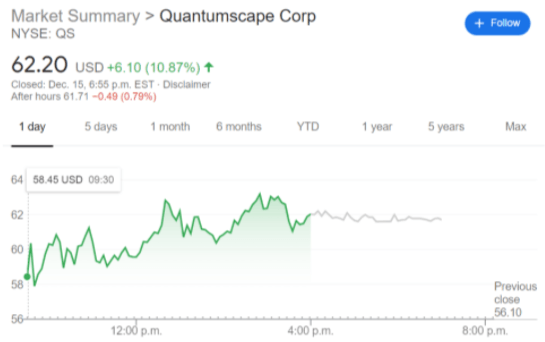 Tuesday also saw a new deal for electric charging station company Blink Charging (NASDAQ:BLNK) which saw its own 8.40% boost on the day. With another rival ChargePoint going public soon via a SPAC IPO with Switchback Energy (NYSE:SBE), the infrastructure needed for a boom in electric vehicles on the road is coming together around America. With more charging stations and electric vehicles on the horizon, it looks like Quantumscape is primed to take full advantage of this shift in technology.