NYSE:NIO rebounded nicely to end the week, as the electric vehicle sector rebounded off of a midweek lull. On Friday, shares of Nio added 2.54% and closed the last trading session of the week at $41.94. Nio’s domestic rivals XPeng (NYSE:XPEV) and Li Auto (NASDAQ:LI) also finished strong, adding 3.23% and 2.72% respectively. The electric vehicle stocks generally act in sympathy to the industry leader Tesla (NASDAQ:TSLA), which also bounced back after a disastrous week. Friday saw Tesla climb back from its recent lows to gain 4.58% before the closing bell.

Speaking of Tesla, there has been a lot of bearish news lately, including the report that Tesla is losing its global electric vehicle market share to companies like Nio. The report specifically noted China as one of the markets that Tesla is fast losing ground, and with the recent delivery figures from Nio, XPeng, and Li Auto, it seems like the Chinese are favoring the domestic automakers. Nio announced it would be doubling its production numbers in the near future, so there could be more pain for Tesla on the horizon in the lucrative Chinese market.

Is NIO a good stock to buy? 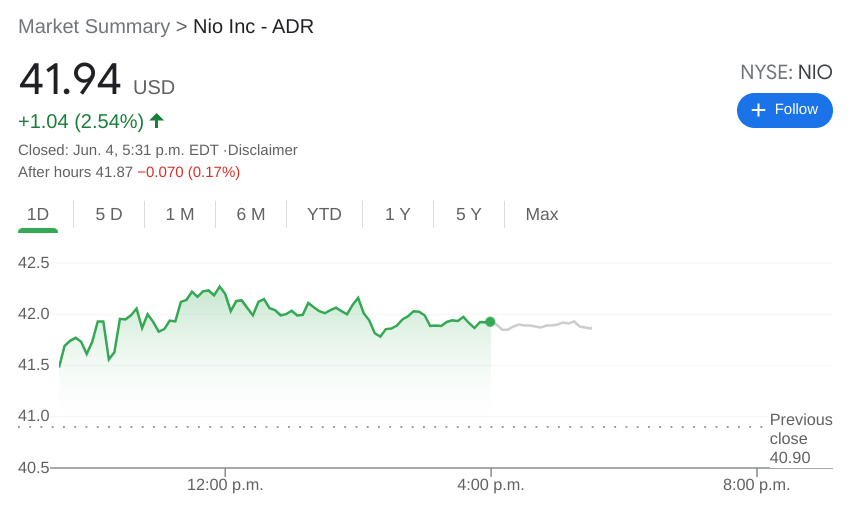 The first mention of Nio’s annual NIO Day event popped up on its website, as the company has opened up bidding for cities wishing to host. Much like Tesla’s Battery Day, Nio uses the event to showcase new vehicle models and give shareholders an update on the year ahead. This year’s event seems to be scheduled for sometime in December or early January.