Gold (XAUUSD) spot bounces off the multi-month lows at around $1730s and grinds higher during the North American session as recession fears fade, and investors cheered China’s stimulus. At the time of writing, XAUUSD is trading at $1741.48 a troy ounce, slightly up 0.17%.

Global equities are rallying, while the Fed’s last monetary policy minutes further cemented the case for a 75 bps rate hike in July, and the greenback recedes from 2-year highs, as shown by the US Dollar Index, back below the 107.000 figure. The yellow metal price jumped as relief, though any upward moves might be capped by rising US Treasury yields, with the US 10-year yield rising four bps, at 2.970%.

On Monday, rumors that the US might lift tariffs on China’s products remain as that. A Senior US Department of State said that no announcement is expected from Secretary Blinken at his meeting with China’s Foreign Minister Wang Yi. Earlier during the Asian session, according to Bloomberg, China was considering allowing local governments to sell $220 billion of special bonds in an infrastructure program, shifting sentiment positively, which weighed on the US dollar.

In the meantime, the US economic docket unveiled the Initial Jobless Claims for the week ending on July 2, which rose by 235K, higher than the 230K, and 4K more than the 231K in the previous week. The report shows some moderation in the tight labor market, as claims spiked the most since January. At the same time, the Balance of Trade showed the deficit contracted to -$85.5 billion, vs. -$86.7B in the previous month, courtesy of an uptick in Exports.

In the week ahead, the US calendar will feature Fed speakers, with Christopher Waller and St. Louis Fed President James Bullard. On Friday, the US Nonfarm Payrolls report, and the New York Fed President John Williams.

From the daily chart perspective, the XAUUSD bias is downwards. However, oscillators meandering around the oversold territory, with RSI at 27.27, might open the door for traders to book profits ahead into the weekend. If that scenario plays out, the XAUUSD’s first resistance would be December 15, 2021, low at $1752.35, followed by the July 5 daily low at $1763.82, before resuming to the downside. 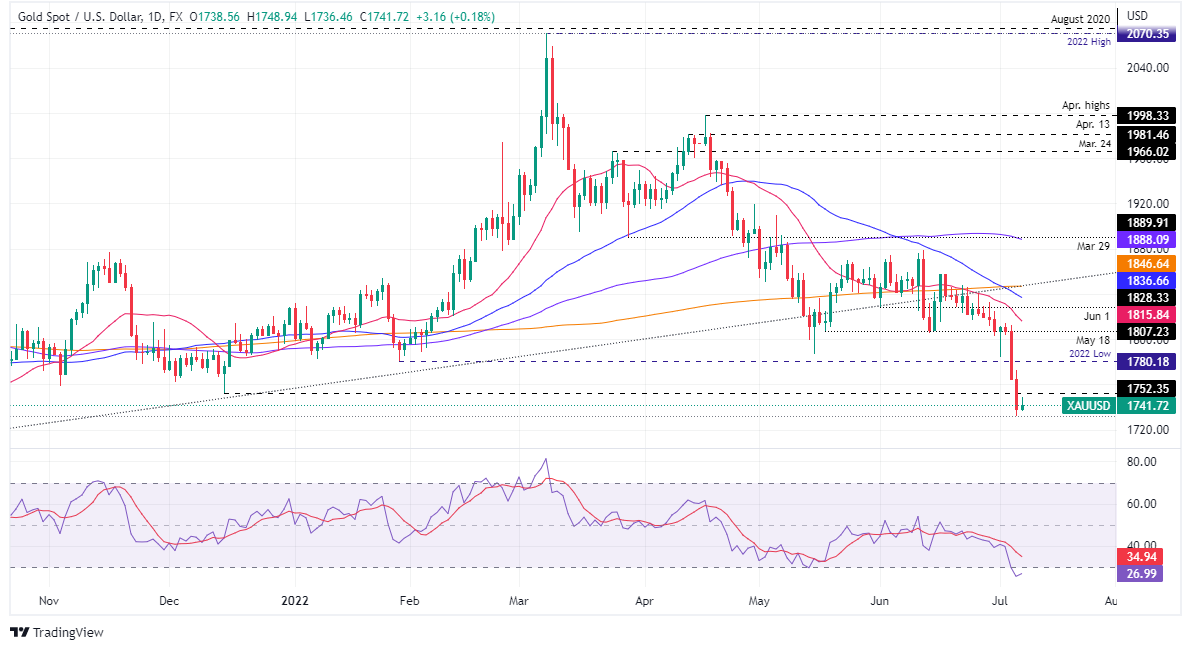 AUD/USD remains idle around d 0.7000 as traders await fresh signals during Tuesday’s Asian session, after the upbeat start of the week. The Aussie pair seesaws between the 50-DMA and the downward sloping resistance line from late April.

The EUR/USD pair has displayed a gradual decline and has slipped to near 1.0193 after failing to surpass the critical hurdle of 1.0220 in the New York session. On a broader note, the asset is advancing modestly after printing a low of 1.0146 last week.

Gold buyers approach $1,800 on softer DXY ahead of US inflation

Gold price cheered US dollar pullback and softer yields to print the latest gains, before taking rounds to $1,790 during the initial Asian session on Tuesday. The metal’s upward trajectory also took clues from equities as the key began the week’s trading on a positive side but retreated by the end of the day.

Dogecoin: Expect a decline, but don't miss the train if it leaves early pt.2

Dogecoin coils within a newfound congestion zone for nearly 2 months. A sweep the lows event could present itself in the coming days. Invalidation of the bearish scenario is a definitive closing candle above $0.0780. Said price action would induce a 75% rally towards $0.12.