Gold traded with a positive bias through the major part of the European trading session, albeit lacked any strong follow-through buying. The precious metal was last seen trading just below the $1815 level, up around 0.30% for the day.

The recent bounce from the vicinity of the very important 200-day SMA, around the $1800 mark, has been along an upward sloping channel. Given the recent sharp fall, the mentioned channel constitutes the formation of a bearish flag pattern.

The negative set-up is further reinforced by bearish technical indicators on the daily chart. This, coupled with the fact that oscillators on hourly charts have recovered from the oversold territory, supports prospects for further weakness. That said, bearish traders might wait for a sustained breakthrough the flag support, around the $1805 area.

A subsequent fall below 200-day SMA, currently near the $1798 region, will be seen as a fresh trigger for bearish traders. The XAU/USD might then accelerate the downward trajectory towards the $1763 region. The latter marks the 50% Fibonacci level of the $1451-$2075 positive move, which should act as a strong base and help limit the downside.

On the flip side, some follow-through strength beyond the trend-channel resistance, currently near the $1820 region, might prompt some short-covering move. The attempted recovery, however, might still be seen as a selling opportunity and runs the risk of fizzling out quickly. This, in turn, should cap the XAU/USD near the $1835 region (38.2% Fibo. level). 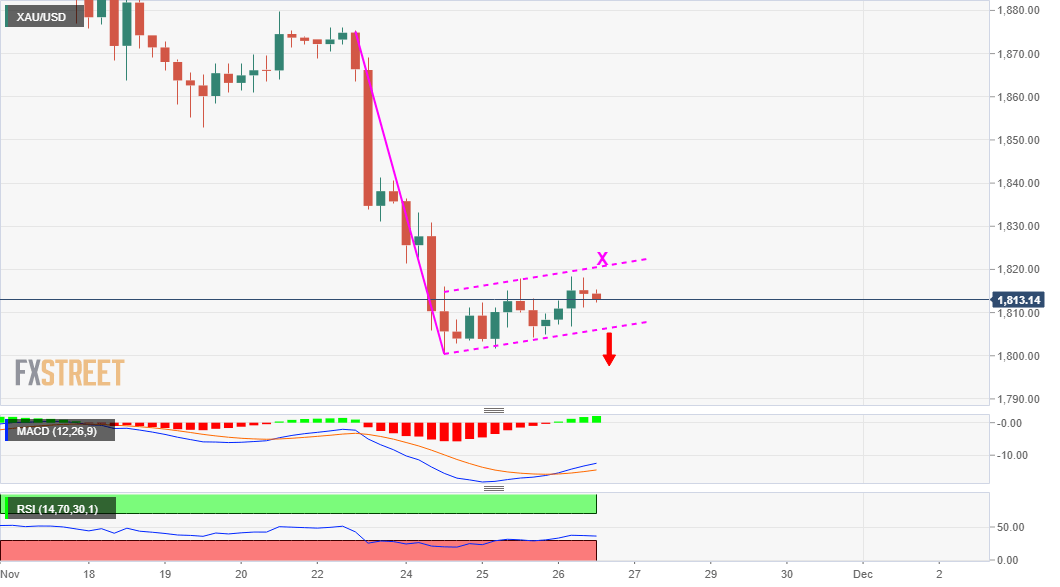