Update May 11: GameStop Corp (NYSE: GME) tumbled over 11% on Monday to hit four-week lows of $143, in line with the broader market sell-off, as rising inflation fears spooked investors. Expectations that the Fed could act earlier than expected to tame inflation hit the Wall Street indices. The GME stock fell for the fourth straight session, starting out a fresh week. However, the stock managed to recover about 1% in post-market trading and recaptured the $144 threshold. The stock risks further downside, as investors believe it appears fundamentally unstable, with 140X earnings multiple unable to justify the struggling Texas-based company's eCommerce prospects.

GameStop and other meme stocks like AMC (NYSE:AMC) are once again at the center of attention as the newly sworn in SEC Chair announced he is expected to propose new regulations for corporate governance and risk. The new rules are aimed at providing investors with more transparency for short-selling and other forms of corporate reporting. It is anticipated that these new regulations will have an effect on the recent popularity of SPAC IPO mergers, as well as public trading platforms like Robinhood. 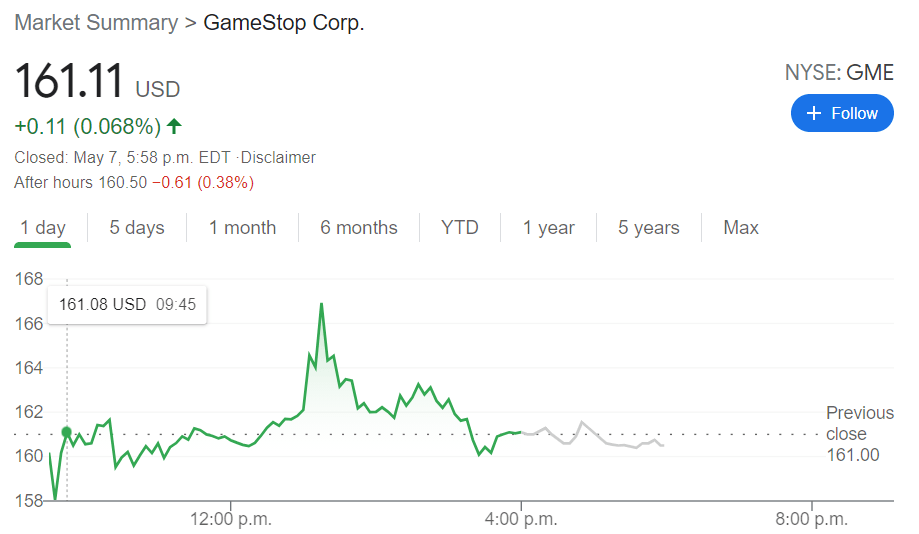 Update May 10: Fear of the Fed has its consequences. GameStop Corp (NYSE: GME) has been extending its falls on Monday, tumbling some 4% at the time of writing to around $154. The moves are relatively erratic, and volatility has certainly returned. Investors seem to be ignoring the Texas-based company's eCommerce prospects.

NYSE:GME is once again the focus of the investing world as the future of the crossroads between investing and social media is finally coming to a head. On Friday, to close the week, GameStop traded sideways and gained 0.06% to close the trading session at $161.11. GameStop is trading below its 50-day moving average as the stock has shown weakness since Redditor Roaring Kitty exercised his near $20 million call options in April, and is now 66% below its 52-week high price of $483.00.