The British pound remains to trade in a narrow range vs. the greenback, though it stays trading with minimal gains after probing the 1.2300 mark reaching daily highs at 1.2313, followed by a dip towards daily lows near 1.2238. At 1.2277, the GBP/USD is up 0.05% in the North American session.

The market mood is mixed, as US equities fluctuate between gainers and losers. The GBP/USD remains almost flat amidst the lack of a catalyst, leaving traders adrift on last week’s news and sentiment. Last Friday, the Bank of England’s chief economist Huw Pill said that interest rates would be the primary monetary policy tool as the bank prepares to begin its Quantitative Tightening.

Given the backdrop that UK’s inflation rose to a 40-year high at 9.1%,  analysts expect that the central bank will hike rates by 25 bps in August. The BoE Monetary Policy Committee is due to consider the plan of selling bonds in the same meeting, after which it could decide to start the asset sales.

Meanwhile, global bond yields, which were lower in the session as recession fears faded, pushed to the upside, shifting the market sentiment to mixed. That said, the US 10-year Treasury yield is moving higher by six basis points, yielding 3.200%-

Calendar-wise, the UK docket would feature BoE speakers with Jon Cunliffe, crossing the wires on Tuesday. Across the pond, the US docket will feature CB Consumer Confidence for June, estimated at 100.4, less than May’s 106.4. that alongside Wholesale inventories, Trade Balance, Regional Fed Indices reports, and Fed speakers.

Consolidation is what the GBP/USD daily chart shows, within the 1.2150-1.2300 area, though it is skewed to the downside. Confirmation of the previously mentioned is the exponential moving averages (EMAs), above the exchange rate, while the Relative Strength Index (RSI) at 44.97, remains in bearish territory. 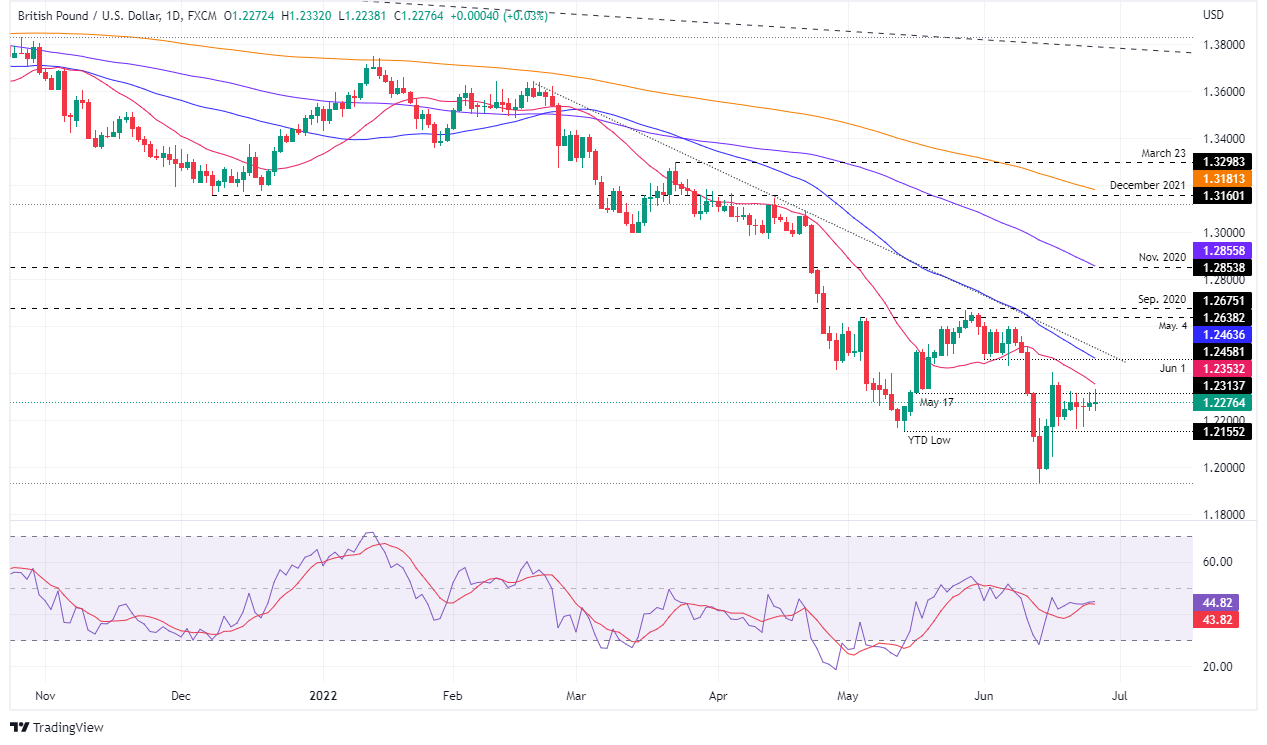