With more clarity in the saga between Tik Tok parent company Bytedance and its American operations, NYSE:FSLY may finally be rebounding after its freefall that came from President Trump’s original stance on banning the app. Shares are now up over 12% since the beginning of Monday’s trading session, even as the broader markets all fell into the red to start the week. Despite the recent drop, Fastly’s stock is still up nearly 250% over the past 52-weeks and is currently trading well above its 50-day and 200-day moving averages.

Why does the Tik Tok deal have such an impact on Fastly? The cloud-computing firm’s CEO Joshua Bixby stated that Tik Tok makes up nearly 12% of its annual revenues so news that the video app has a good chance of remaining in the United States is music to Fastly’s ears. If Tik Tok is able to maintain its presence in America, it would operate as a separate entity from its China-based parent company Bytedance. Even if Tik Tok takes a while to sort itself out, investors can take solace in the fact that other internet titans such as Twitter (NYSE:TWTR), Shopify (NYSE:SHOP), and Pinterest (NYSE:PINS) all rely on Fastly to keep their respective sites operating as smoothly as they do. 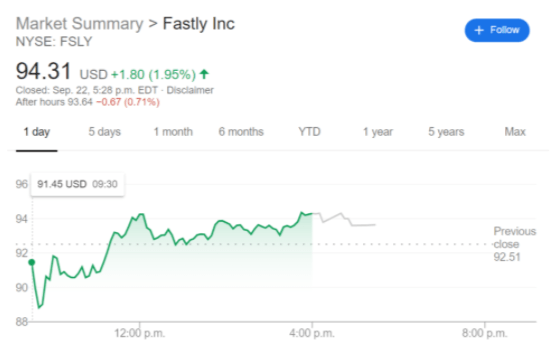 While it certainly appears that Tik Tok will remain in America in one way or another, investors should temper their expectations until the Chinese government fully signs off on the deal. Ultimately, China is able to completely shut down Bytedance so block Tik Tok from being used in the United States, although this seems like a drastic reaction. Political jousting between China and America aside, investors should keep their eyes and ears on this ongoing saga, as 12% does indicate that Tik Tok is a substantial contributor to Fastly’s bottom line.