Consumer staples, despite being a non-cyclical sector, tends to perform better during the holiday season.

If we look back at the last 20 years, we can notice how during (or in preparation to) the Easter, Summer and Christmas the sector tends to perform better and generate interesting return. Even stronger performance has been reported during the last 5 years where July and August are among the best months of the year.

From a seasonality perspective, the Consumer staples sector has the coming months in its favour. This theory is now supported as well from the Relative Rotation Graph (#RRG): in fact, using a much shorter time frame we notice how the sector is now leaving the “lagging” area to cross into the “improving”one.

Looking at the recent moves of the #XLP, the ETF found on the 100MA a strong area of support and it’s now, on positive volumes, heading north. In addition, the MACD is about to crossover together with the RSI that is approaching the bearish trendline: a break of it, could support a further push to the upside.

Upside potential between +4% and +6% over the near term. 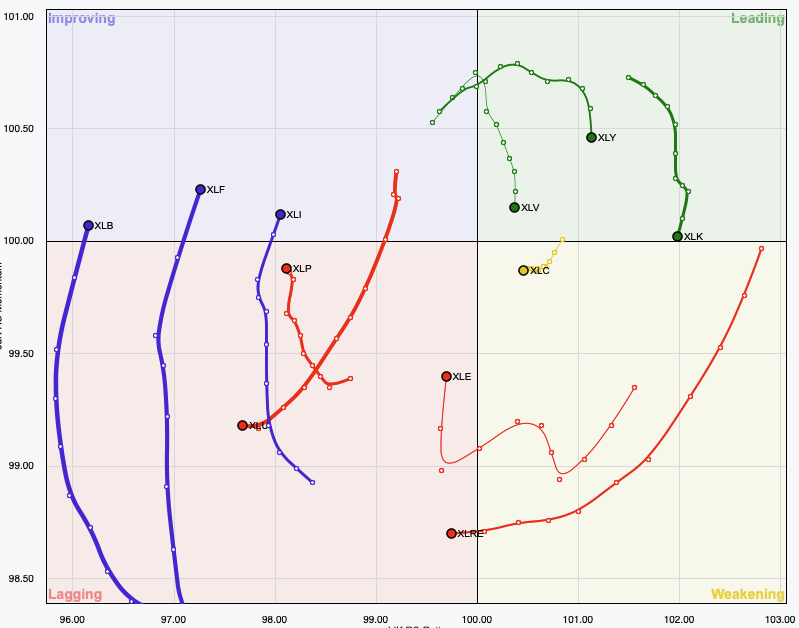 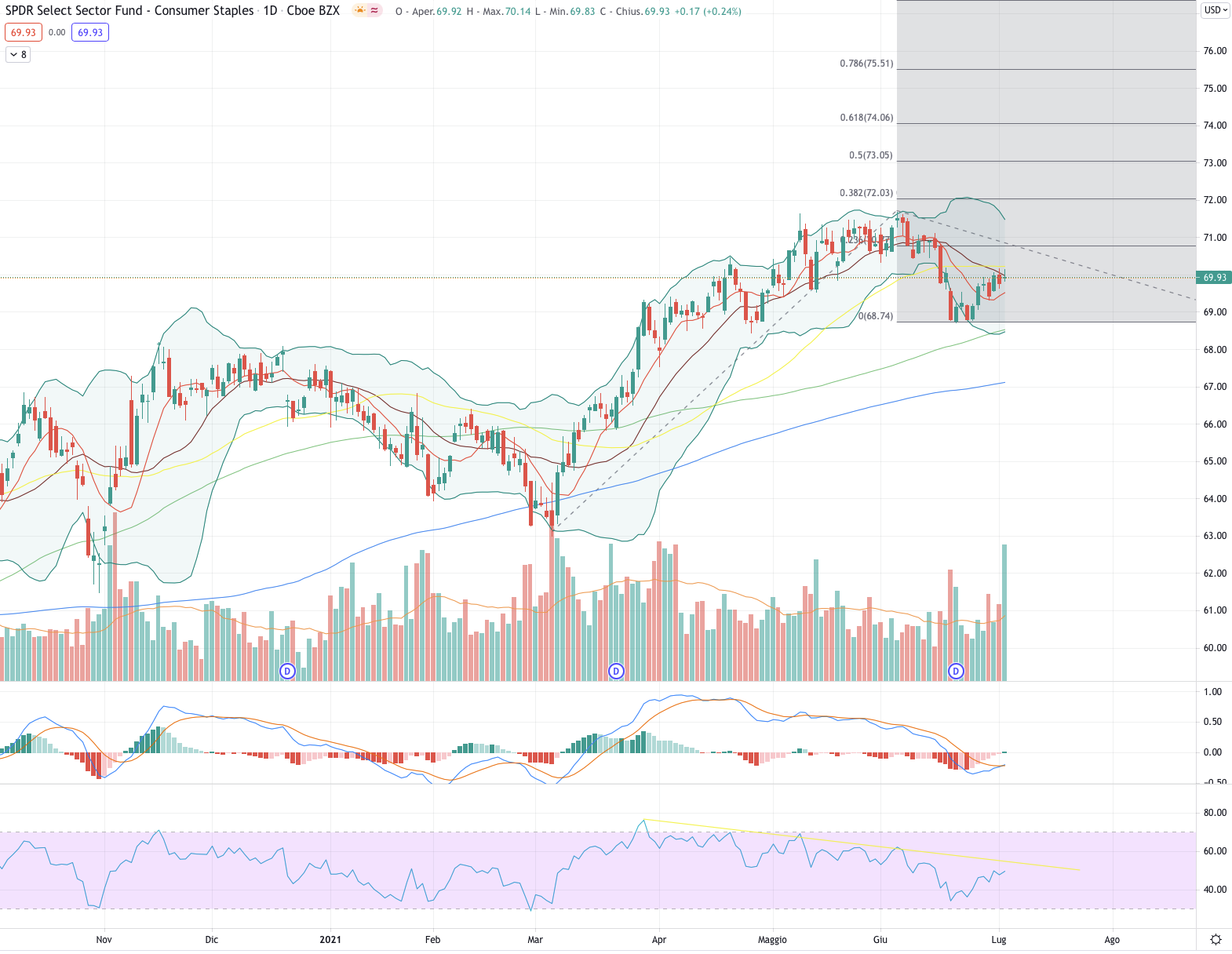 Going into more details, we highlight below a watchlist of 4 stocks that we believe may have a technical setup in favour of bullish moves. In addition, the stocks below give an optimal risk/reward ratio and they are all part of the Brewers and Distillers industry.

The Molson Coors Beverage Company, commonly known as Molson Coors, is a multinational drink and brewing company headquartered in Chicago in the United States.

The stock recently pulled back from all time high and it is now floating at a strong level of support at $52.00, which acted as resistance during the whole first quarter of 2021.

The MACD is signalling the negative momentum, together with an RSI that is in oversold territory and it has room to support upside moves.

The stock is now overstretched to the downside therefore we are evaluating two entry points: in case the stock quickly recover, we will wait for a close above the 100MA before considering long positions.

Alternatively, in case the stock would not manage to come back above the 100MA we will wait the price to come at $50 before entering in any position. 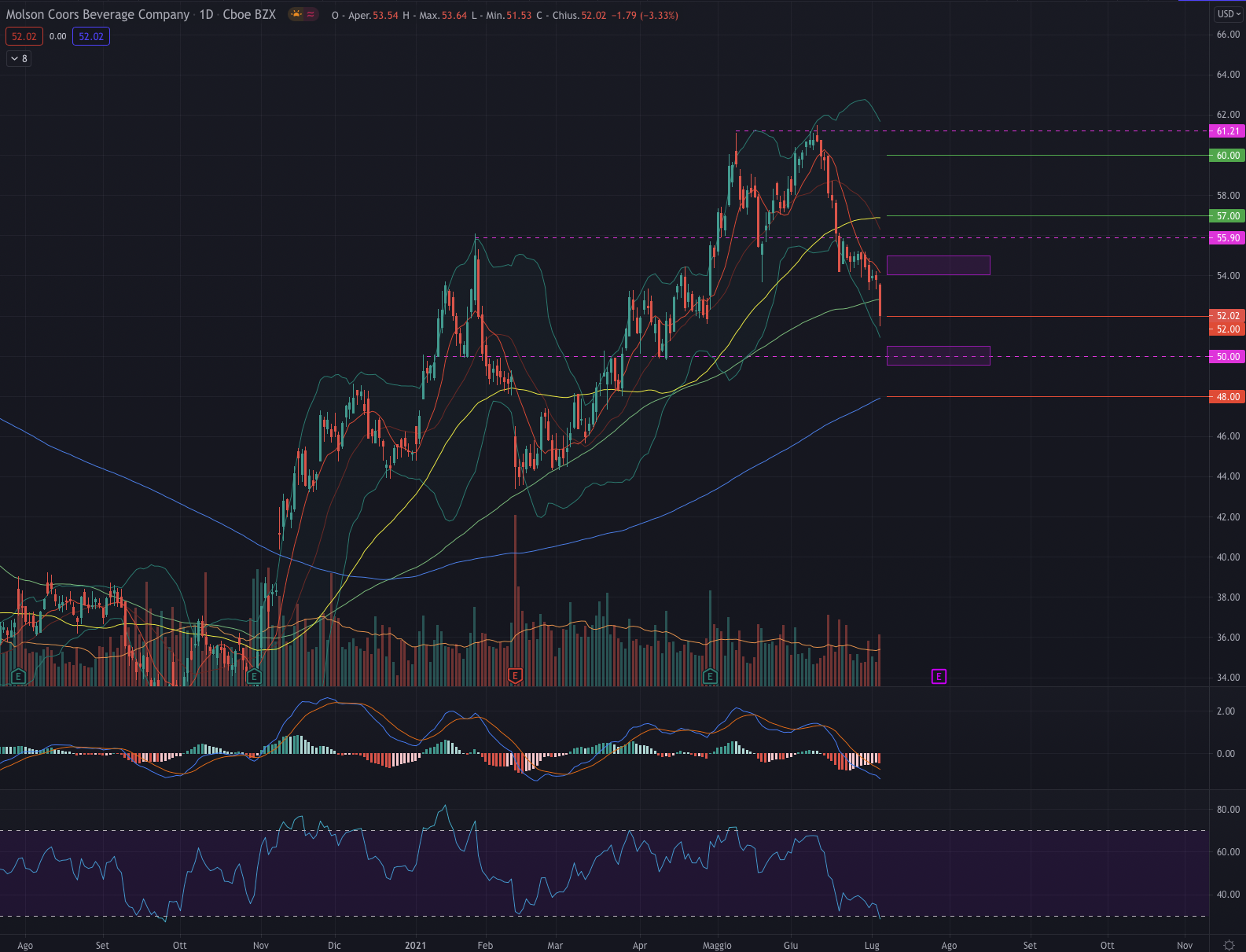 Boston Beer Co., Inc. engages in the business of alcoholic beverages. Its brands include Samuel Adams, Twisted Tea, Angry Orchard, and Truly Hard Seltzer. The company was founded by C. James Koch in 1984 and is headquartered in Boston, MA

The stock has entered a bearish channel from April 2021 and it is now approaching a strong area of support. Given the strong area, the stock could enter a period of consolidation to then start to drift higher.

The MACD is below 0 and moving almost sideway: this could be read positively as during this time the price when down with a momentum that stayed almost unchanged.

The RSI has returned to almost oversold territory and it has now plenty of room to support upside moves.

In terms of entry price, we see two interesting scenario: either a closer move to current support or a break of the current bearish channel. 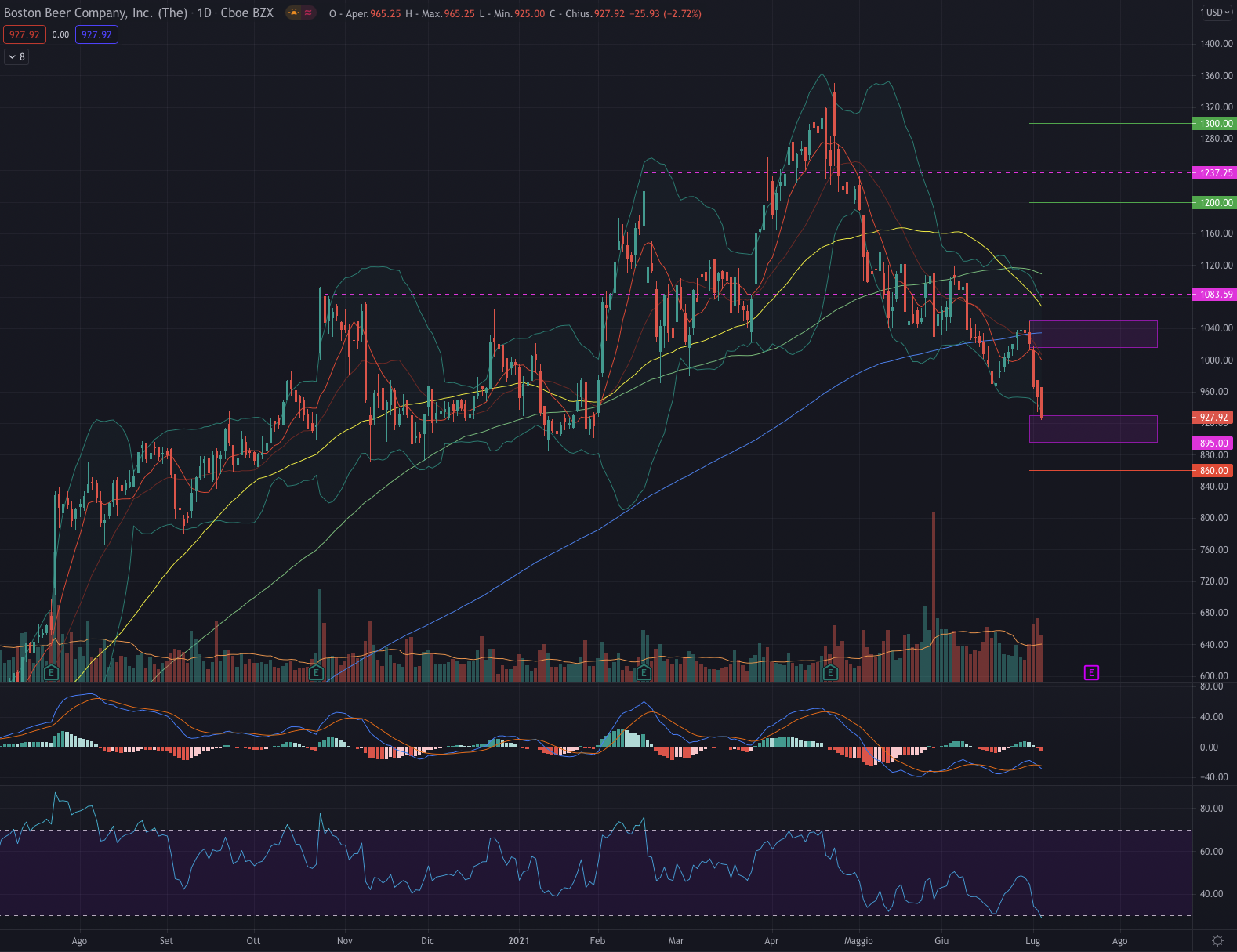 Anheuser-Busch InBev SA/NV, commonly known as AB InBev, is a multinational drink and brewing company based in Leuven, Belgium.

The stock has recently closed the gap from the beginning of May which now represents a strong support level. Near the $ 70.00 there is also the 100MA which acted as support previously and represents a good indicator of the bullish trend.

Despite a MACD the went below 0 is more the RSI that could anticipate a move to the upside, being now very close to the oversold territory.

We suggest a tight stop loss just below the 100MA, in case the price would not hold we will look at $ 65.00 as an additional entry area. 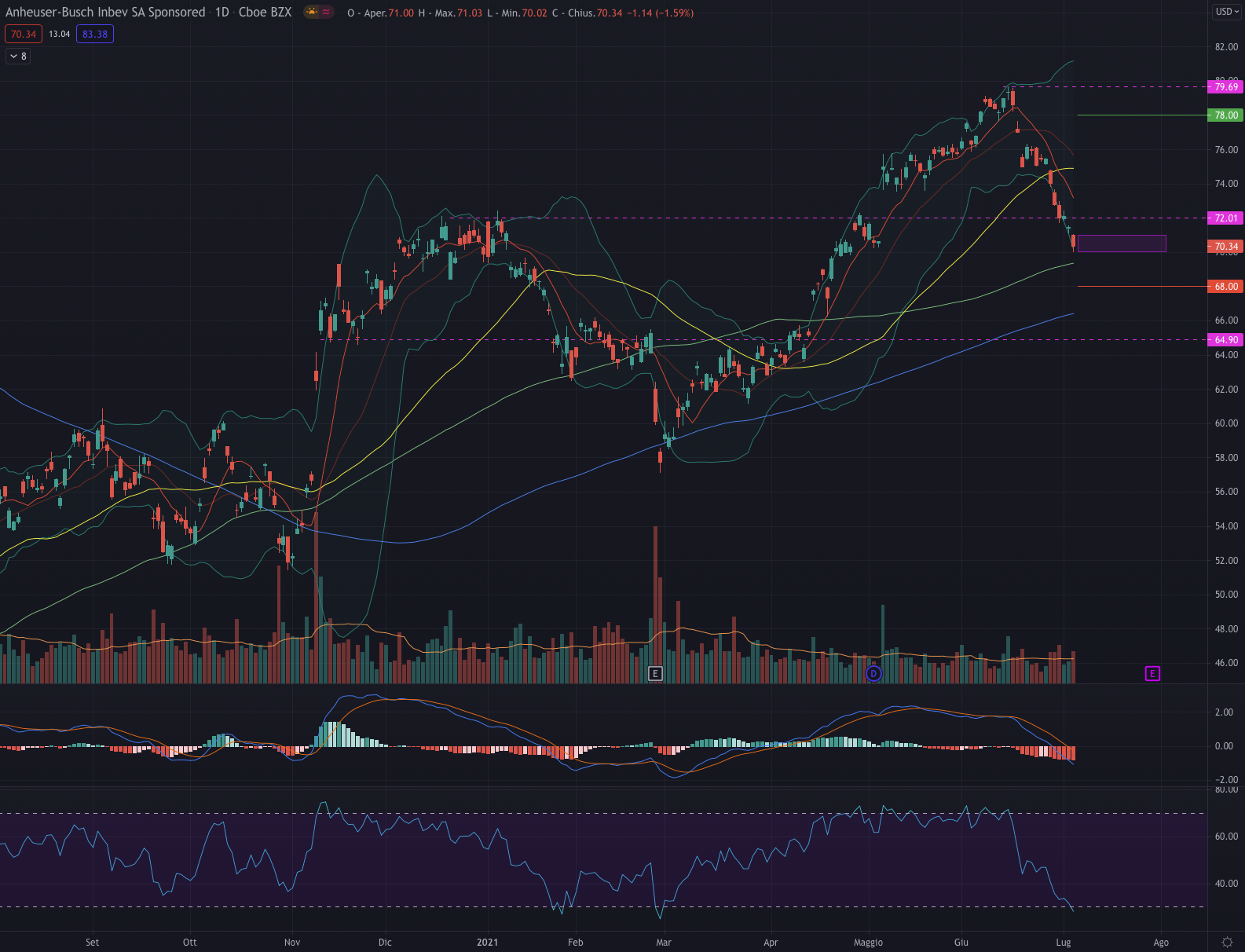 Constellation Brands, Inc., a Fortune 500 company, is an American producer and marketer of beer, wine, and spirits. Constellation is the largest beer import company in the US, measured by sales, and has the third-largest market share of all major beer suppliers.

#STZ has been trading sideways since the beginning of the year and we believe there will be soon the conditions to break to the upside.

Before breaking current resistance we believe the stock will, once again, test the $224.00 level where then will offer a good risk/reward long position.

The MACD is once again curving down together with the RSI that is pointing to the downside. 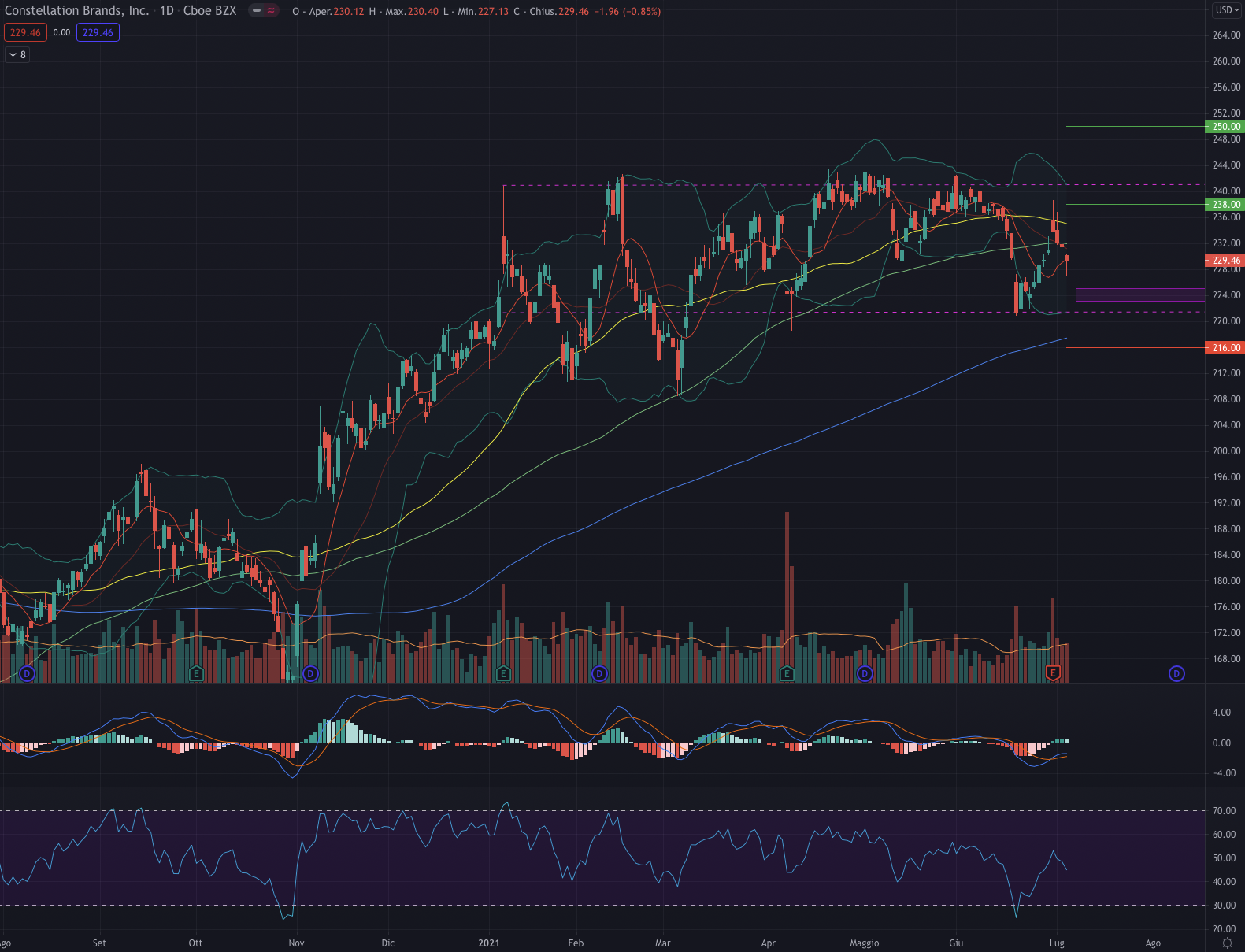