Update June 18: Churchill Capital Corp IV (NYSE: CCIV) has been on the back foot in Friday's early trade. Shares of the blank-check company about to merge with Lucid Motors has been able to stabilize after shooting higher and suffering a correction. However, it risks losing additional ground if it closes below $24.04, a critical resistance level. At the time of writing, bulls are unable to capitalize on Lucid's unveiling of DreamDrive lidar technology, as described below.

NYSE:CCIV investors may have experienced a fake breakout on Wednesday, or it could just be general market skepticism regarding EV SPAC mergers. Shares of CCIV fell by 2.04% on Thursday, to close the trading day at $23.55, despite the rest of the electric vehicle sector hitting cruise control. CCIV looked as if it were about to break through its previous resistance points and rise higher, ahead of its anticipated merger with Lucid Motors on July 23rd. The bounce lower following Wednesday’s gains shows that there is still some hesitation in investing in SPACs, especially given the recent headlines.

Lucid Motors did reveal some new details about its DreamDrive autonomous driving system. Unlike rival Tesla (NASDAQ:TSLA), Lucid is utilizing lidar technology and driver monitoring. The DreamDrive system will have 32 different sensors around the vehicle to ensure proper safety  and protection of the driver. Lucid is calling DreamDrive a driver assistance program, rather than full on autonomous driving, and will include features such as Park In and Out, Traffic Protection, and Surround View Monitoring. A full DreamDrive unveil is expected from Lucid at a later date. 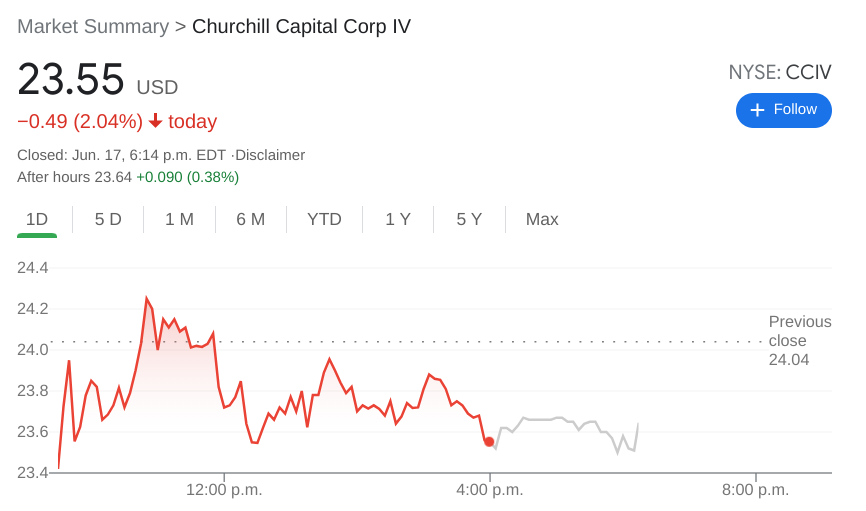 Some more bad news out of Lordstown Motors (NASDAQ:RIDE), after its CEO and CFO both resigned earlier in the week. Following that announcement, the company attempted to save face by reporting that it did indeed have enough binding orders for production to continue until the end of the year. Well, on Thursday Lordstown backtracked and said that it has no binding orders for vehicles outstanding with customers, and shares fell a further 4.36% as a result.