NASDAQ:BLNK has traded sideways over the past few months as investor excitement for the electric vehicle (EV) charging station firm has waned since late June. The stock jumped by nearly 25% on Tuesday but has traded down lately, as the initial excitement over the company’s announcement has been tempered. Shares are still up over 190% over the past 52-weeks but it finds itself trading below its 50-day average, even after the spike on Tuesday.

Blink Charging Co. announced that despite the difficulties of working during the COVID-19 pandemic, it was still able to install 539 EV charging stations around the world which represents a 100% increase in installations year-over-year. Of these 539 new stations, 300 were in the United States which is readying itself for a shift towards an electric vehicle landscape. On Wednesday, California Governor Gavin Newsome announced that the state would cease selling gas-powered vehicles by the year 2035. Appropriately, 37% of the 300 new charging stations were deployed to California alone. 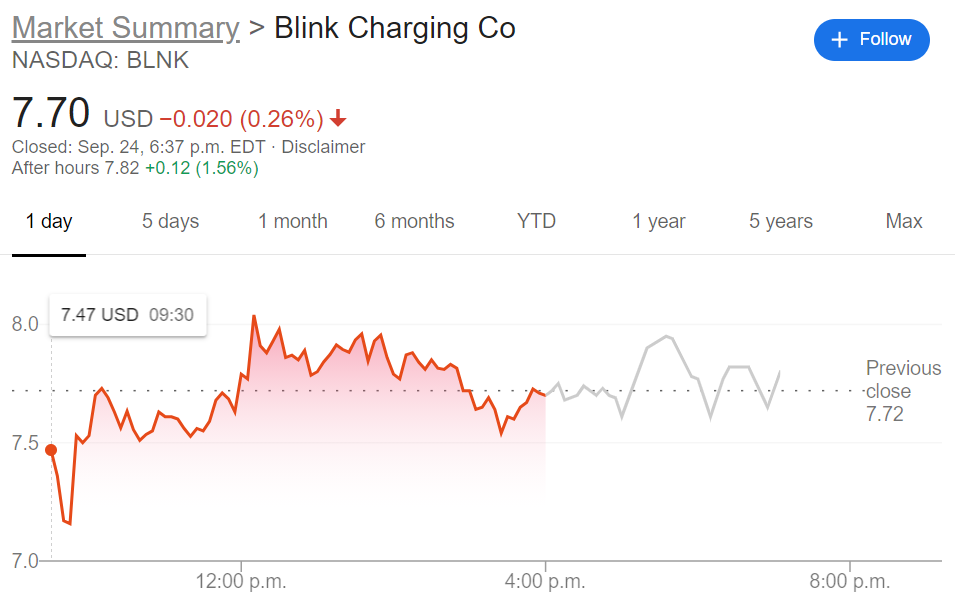 The announcements by both Blink and Governor Newsome were well-timed with electric vehicle industry leader Tesla (NASDAQ:TSLA) holding its Battery Day and shareholders meeting on the same day. The future is indeed bright for the sector and bargain investors may don't want to miss the opportunity now to take a small position in the company to get in on the ground floor. The stock is now at a 47% discount off its 52-week highs and if Blink is able to continue to deploy charging stations around the world, we should see revenues increasing in time.

EUR/USD under pressure around 1.1850 amid US election concern

EUR/USD is under some pressure around 1.1850 the anti-risk dollar is drawing haven bids on reports of meddling in US elections and fading prospects of an imminent US stimulus deal. US jobless claims are eyed.

GBP/USD is trading well above 1.31, consolidating its gains as intense Brexit talks restart in London, aiming to reach an accord by mid-November. Rising UK coronavirus cases and political uncertainty in the US are keeping the safe-haven dollar bid.