NYSE:BABA dipped slightly to start off the trading week as shares of the Chinese eCommerce Giant fell 0.23% to close Monday’s trading session at $270.11. The stock has trailed off after a strong rally at the end of last week as momentum from the most recent Singles Day event re-ignited investor interest. Still, the stock is down 15% over the past month after reaching its 52-week highs of $319.32 in late October. BABA is now trading below its 50-day moving average as the prolonged dip has presented a nice buying opportunity for investors.

Sales numbers for BABA’s most recent Singles Day event on November 11th are in and the continued reliance on eCommerce during the COVID-19 pandemic clearly had an effect. Total sales were up 26% year-over-year with over $74 billion in sales which makes Amazon’s (NASDAQ:AMZN) Prime Day numbers of an estimated $10.4 billion, seem meagre in comparison. Alibaba also finds itself at yet another spat between the United States and China, as the Trump Administration continues to try and implement harsh measures during what is most likely the final few weeks of his presidency. President Trump is attempting to force Chinese companies to be delisted from American exchanges if they do not abide by the U.S. auditing rules. 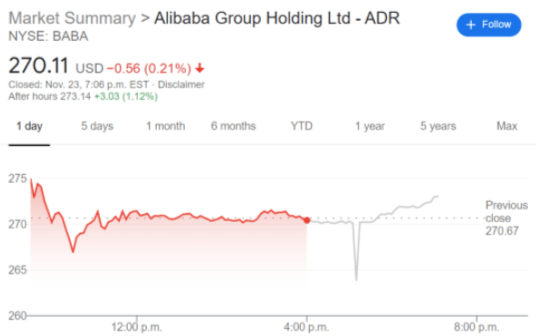 Truthfully, Alibaba may still be reeling from the debacle that was the failed IPO attempt of its fintech company ANT Group. Although the IPO should still take place in the next year or so, investors may be hesitant to get involved with Jack Ma right now as may still be under the ire of members of the Chinese Communist Party after his public criticism of them.