The Australian Dollar (AUD) is erasing some of Monday’s losses against the US Dollar (USD) even though market sentiment deteriorated, as shown by Wall Street, set to end in the red. Latest Federal Reserve (Fed) officials’ hawkish comments,  China’s Covid-19 woes, and weak retail sales data in Australia are the main drivers of the day. At the time of writing, the AUD/USD is trading at 0.6684, above its opening price b 0.50%, but off the day’s high of 0.6748.

The equity markets in the United States (US) wavered by a slide in mega-cap equities. Federal Reserve policymakers led by the St. Louis Fed President James Bullard said the central bank has “ways to go to a restrictive policy.” Bullard added that the Fed needs to increase rates until 2023 and foresees the Federal Funds rate (FFR) to peak at around 5% to 7%. Echoing some of his remarks was the New York Fed President John Williams, adding that the strong economy in the US “suggests a modestly higher path for policy relative to September. Not a massive change, but somewhat higher.” Williams added that inflation could fall to 5.0%-5.5% by the end of 2022 and 3.0%-3.5% by late 2023.

Data-wise, the US economic calendar revealed that Consumer Confidence or November, reported by the Conference Board (CB), dropped to a four-month low of 100.2, weighed by the combination of inflation and interest rate hikes, posing a challenge to consumers, threatening to slow the economic growth in 2023.

Elsewhere, the US Dollar Index (DXY), a measure of the greenback value against a basket of six currencies, bounced off daily lows around 106.058 and climbed to 106.795, registering moderate gains of 0.12%, capping the AUD/USD gains.

Aside from this, the Covid-19 riots in China appeared to wane as cases edged lower. On Monday, China reported 38,421 new local cases, down from the 40,052 record high reported for Sunday, with no deaths for two straight days. Health officials urged local governments to avoid unnecessary and lengthy lockdowns. Chinese health officials said the Omicron variant is less severe while committed to vaccinating elder people aged 80 or older.

Australia and US economic calendar

Australia’s economic calendar will feature Housing Data and the Reserve Bank of Australia (RBA) Governor Kearns’s speech. On the US front, the docket would be busy with employment figures to be released, GDP, the Goods Trade Balance, Wholesales Inventories, the Chicago PMI, Pending Home Sales, and Fed speaking, led by the Federal Reserve Chairman Jerome Powell.

The AUD/USD remains neutral-to-upward biased, though failure to crack 0.6750 caused a 70-pip retracement on the pair, back below 0.6700. Albeit the inverted head-and-shoulders is still in play, Tuesday’s candlestick printed a sizeable upper wick, suggesting that sellers stepped in around the 23.6% Fibonacci level around 0.6703. Therefore, the AUD/USD path of least resistance near term is downwards. 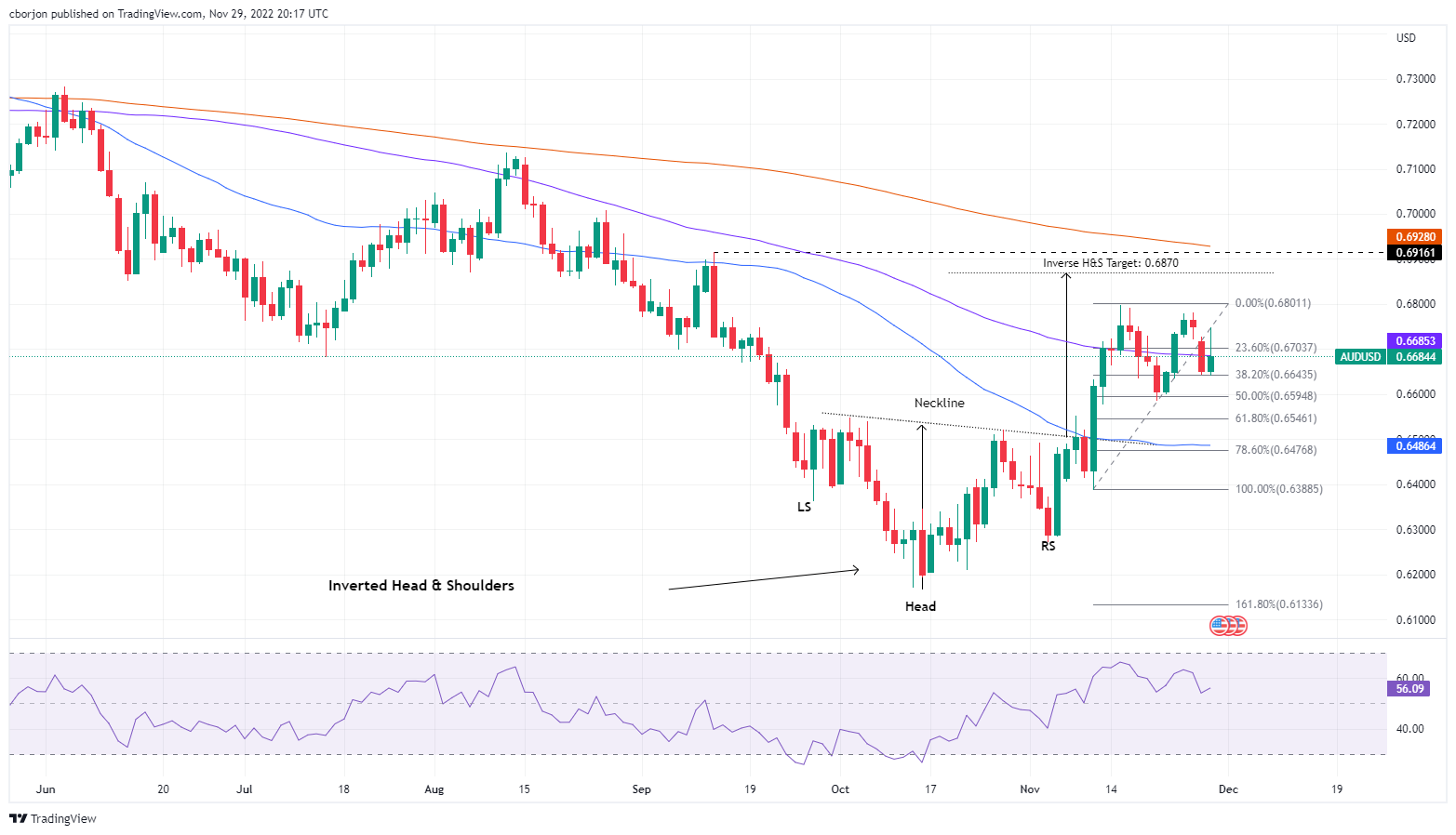