The AUD/USD pair weakened farther below the 0.7400 handle and refreshed weekly lows in the past hour, albeit quickly recovered few pips thereafter.

The pair extended this week's retracement slide from 0.7440 area, with a combination of negative factors exerting downward pressure for the second consecutive session on Thursday.

The US-China trade tension reemerged after the Trump administration was said to impose 25% tariffs on $200 billion of Chinese imports, as against 10% proposed earlier, and dented sentiment surrounding the China-proxy Australian Dollar.

This coupled with a modest US Dollar uptick, supported by prospects for a gradual Fed rate hike path, reaffirmed by Wednesday's FOMC monetary policy statement, further collaborated to the pair's ongoing decline.

Meanwhile, the pair found little support from today's better-than-expected Aussie trade balance data, showing a surplus of AUD 1873 million in June, and a goodish rebound in copper prices, which tend to underpin demand for the commodity-linked Australian Dollar.

Today's US economic docket, featuring the second-tier releases of weekly initial jobless claims and factory orders data, seems unlikely to provide any meaningful impetus. Hence, the focus will remain on Friday's keenly watched US monthly jobs report - NFP, which should help investors determine the pair's next leg of directional move.

The pair faced rejection near 200-hour SMA during the Asian session on Thursday and is now flirting with a short-term ascending trend-line support, which if broken should pave the way for an extension of the bearish slide.

Momentum below the mentioned support is likely to accelerate the downfall towards 0.7340-35 support area before the pair eventually drops to retest YTD lows, around the 0.7310 region. 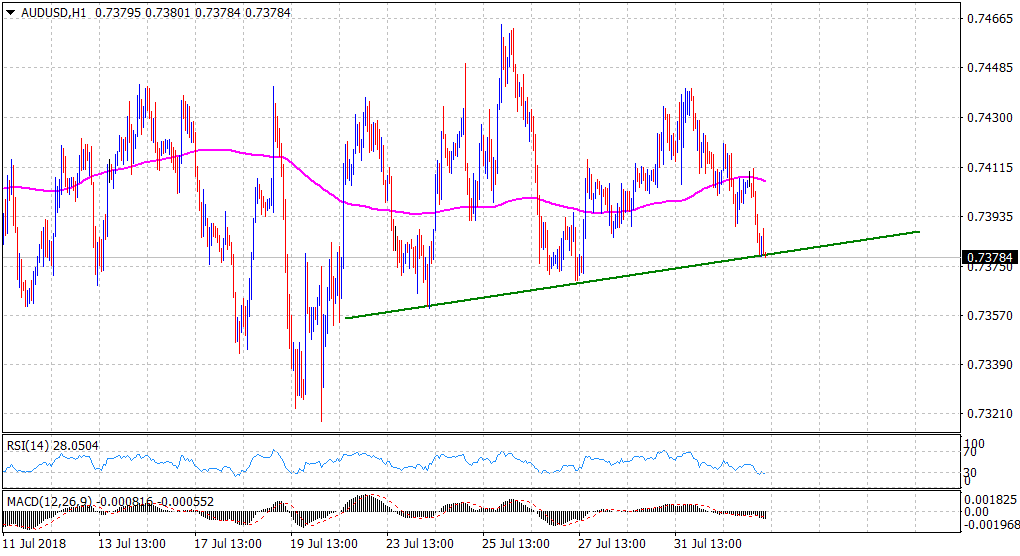