The AUD/USD pair traded with a mild positive bias through the early European session, albeit lacked any strong follow-through and remained below the key 0.6500 psychological mark. The mentioned level is followed by the 100-day SMA near the 0.6525 level and a static resistance near the 0.6560-70 zone, which has been capping the upside over the past two weeks or so.

Meanwhile, any meaningful pullbacks were being bought into near 100-period SMA on the 4-hourly chart, which coincides with a three-week-old ascending trend-line support. The combination of the 0.6560-70 horizontal barrier and an upward sloping trend-line constituted towards the formation of a bullish ascending triangle on short-term charts.

Bulls technical indicators on the daily chart further add credence to the constructive set-up and support prospects for an extension of the recent recovery from multi-year lows. However, it will be prudent to wait for a convincing break through the triangle resistance before confirming a bullish bias and positioning for any further appreciating move.

Conversely, a sustained weakness below the 0.6435-25 confluence support will negate the positive outlook and turn the pair vulnerable to slide back towards testing sub-0.6300 levels. 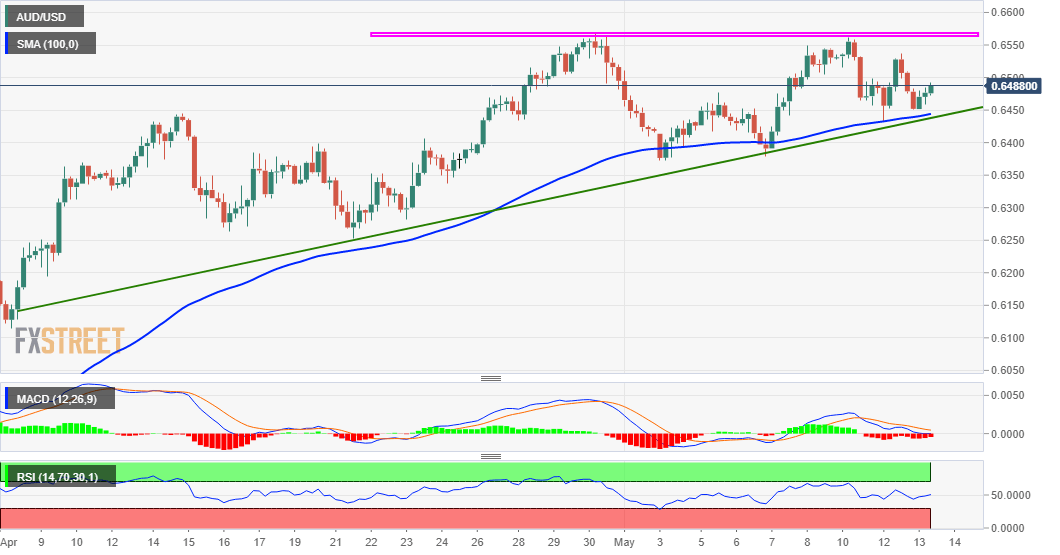 EUR/USD remains on the back foot near 1.1300, two-week lows. Market sentiment remains sour, as Russia-Ukraine worries join pre-Fed anxiety. The Treasury yields pause four-day downtrend while the dollar stays underpinned amid risk-off trading. US CB Consumer Confidence awaited ahead of the Fed decision.

Decentraland price could be headed for a further decline as MANA continues to drop toward the bearish target projected by a pessimistic chart pattern. The token is at risk of a 28% plunge toward $1.46 if the 200D SMA fails to act as a reliable foothold.

It could be a make or break week for the markets, with the Fed meeting on Wednesday, big tech earnings, and ongoing tensions on the Ukraine/Russia border. That may sound a bit over the top given how deep a correction we've already seen.