Alibaba shares have suffered as news swirls over it and its affiliate, ANT Group. Alibaba shares are currently trading at $228.50 in Tuesday's pre-market. BABA shares have fallen from a February high of over $270 as negative sentiment and newsflow hit the stock.

Alibaba (BABA) is the Chinese Amazon but has been in the news for all the wrong reasons of late. Just in case you are back from a trip to Mars, here is a brief recap of this ongoing saga.

BABA is one of China’s most successful internet companies, has a similar business model to Amazon with an online retail marketplace, a cloud business and a fintech e-payments business called ANT Group. ANT Group was due to IPO in late 2020 but was pulled at the last minute after BABA and ANT founder Jack Ma gave a speech in which he appeared to criticised Chinese regulators and the banking industry. The IPO (Initial Public Offering) was cancelled and BABA share price struggled, losing over 30% of its value.

2021 has seen a bit more stabilisation return to Alibaba (BABA) share price as investors continue to focus on BABA's strong core business. Alibaba shares started 2021 at around $228 and rallied sharply to over $270 by February. Since then Alibaba shares have slid back to more or less where they started in 2021.

ANT Group has now been valued mush less than its proposed IPO according to a report by Reuters. ANT Group had been due to IPO with a $315 billion valuation but that is nearer to $200 billion now according to the Reuters report citing sources. Warburg Pincus values ANT Group at about $220 billion as of the end of 2020 according to Reuters.

ANT Group is undergoing considerable change in order to respond to regulatory concerns following its failed IPO. CEO Simon Hu resigned on March 12 in an unexpected move, for personal reasons according to ANT Group. ANT Group is changing its structure in response to regulatory concerns over its micro-lending division, moving toward a more financial holding structure rather than a fintech company. This will no doubt affect ANT Groups valuation as financial stocks do not command the same premium as technology companies. The change may also affect its business model and revenue and require further capital. BABA shares have struggled as news of ANT Groups changes have been digested by investors.

Alibaba (BABA) shares closed Monday's session down 0.7% after it was widely reported that China has asked Alibaba to sell some of its media assets. The WSJ first reported the news saying that the Chinese authorities were concerned over Alibaba's growing media influence. Alibaba has stakes or ownership of Weibo, South China Morning Post and Bilibili among others.  The WSJ had also reported on Thursday, March 11 that China is considering a record $975 million-plus fine for Alibaba and want BABA to distance itself from Jack Ma. 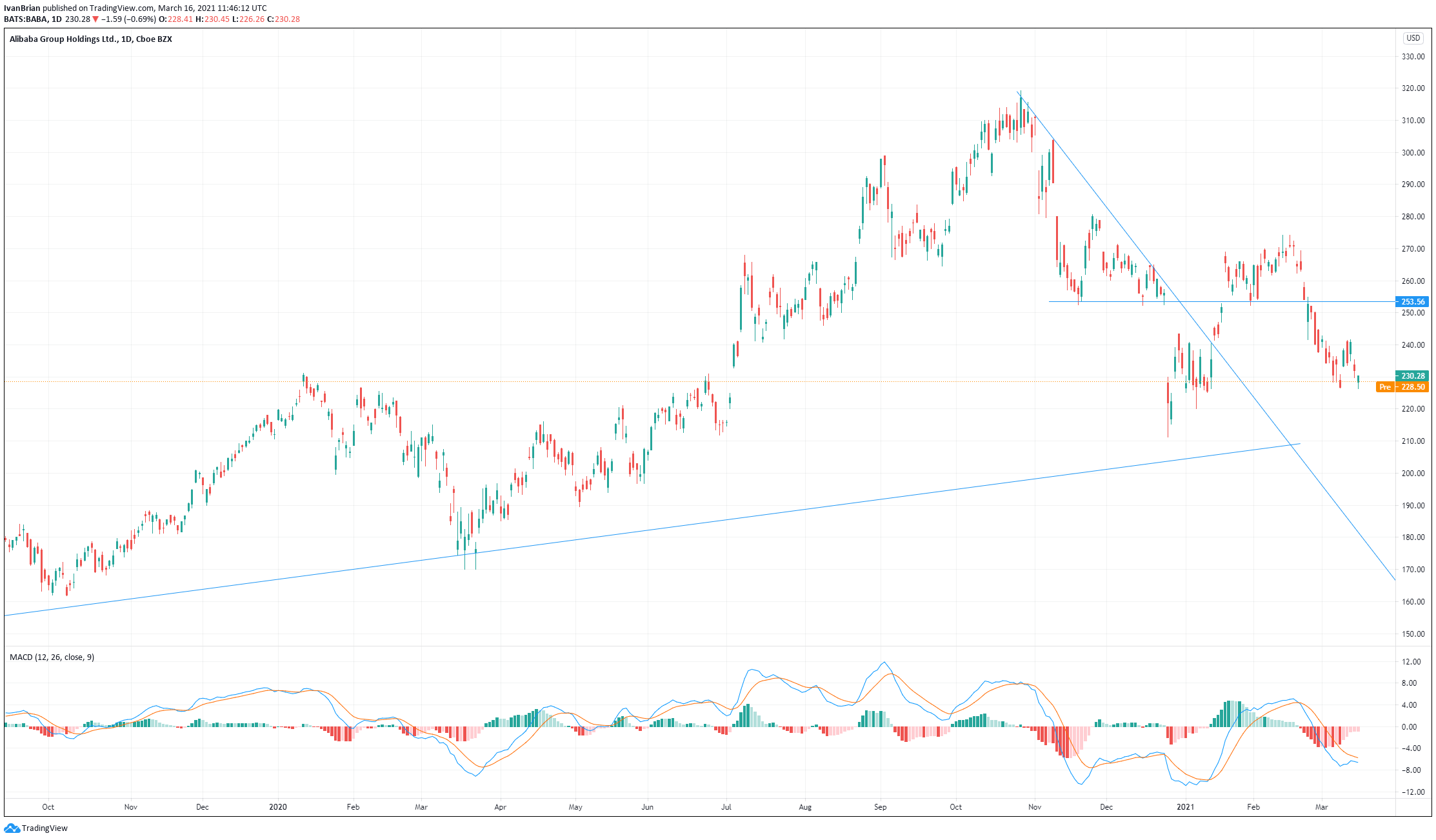 It would appear that China does not want to destroy Alibaba but merely bring it back into line with how China does business. Alibaba (BABA) is a staple Chinese company and almost part of the way of life now for a lot of Chinese consumers. Added to this Alibaba has large global institutional shareholders who would take a dim view of being totally wiped out of their investment. China likely knows this and is merely trying to balance its own interests, coupled with those of having an economy that encourages investments and accessibility. The situation is likely to play out over the next few months and will weigh on the share price. But once and if resolved BABA has a solid business and powerful revenue stream which should underpin the share price. Picking the right entry point will be the tricky part. Support from trendline comes into play somewhere around the $210-215 level.