SushiSwap price was near an all-time high just a month ago before falling under the sphere of a weak Bitcoin price and the plunge in altcoins. SUSHI just struck support around the May 23 low, closing the day with a doji candlestick pattern. The resulting rebound has been lackluster and highlighted by increased levels of distribution, suggesting the DEX token is poised to drive lower moving forward.

SushiSwap is a DeFi exchange based on the Ethereum blockchain that lets two parties transact cryptocurrencies directly. SUSHI tokens power the platform, a reward for SushiSwap liquidity providers, and enable voting on platform changes. Unlike most decentralized exchanges, SUSHI pays holders for owning coins from the platform’s fees. SushiSwap is the sixth-largest DEX.

As can be noted on the price chart, SushiSwap’s history has been dotted with difficulties. A leading developer took $13 million from a development fund for personal earnings in September 2020, causing a massive decline. The developer later separated from the community and turned over control to Sam Bankman-Fried, CEO of the FTX exchange, instigating a recovery in SushiSwap price into May of this year.

The remarkable recovery was unable to avoid the punishing sell-off that has rattled the cryptocurrency complex in April-June, driving SushiSwap price down 75% at the June 22 low. The current leg of the correction undercut the May 23 low of $6.28 and came within inches of testing the 78.6% Fibonacci retracement level of the November 2020-May 2021 historic advance at $5.64.

With a new correction low, the apparent debate revolves around whether the digital asset has secured a firm low or is vulnerable to additional weakness. Based on the charts, SushiSwap price still has the potential to plunge to $4.80 in the days or weeks ahead.

The first bearish signal is the upcoming Death Cross pattern, when the 50-day simple moving average (SMA) crosses below the 200-day SMA. Historically, the pattern precedes a prolonged downturn for both the faster and slower moving averages. It signals that the short-term momentum in SUSHI is slowing.

Furthermore, the pattern implies the potential for a significant sell-off for SushiSwap price, and it has been a timely predictor of many severe bear markets in other financial assets. Still, it is not a guarantee of decline. However, because the death cross pattern is a long-term indicator, it does carry more weight than single candlestick patterns such as a doji.

The cross should occur in the next couple of days, and an increase in trading volume should accompany the pattern.

A second and equally important obstacle is the lack of an oversold reading on the daily Relative Strength Index (RSI). Despite the larger correction being defined by plunges of 73% and 57%, SushiSwap price still has not knocked the daily RSI below 30, suggesting that more selling needs to materialize, likely in the form of a panic drop before a definitive low can be forged.

Of course, not all meaningful lows are accompanied by oversold readings, but most long-term trends commence from an extreme oversold condition on the daily or even the weekly chart.

A final factor that expresses some concern over the current low being conclusive is the volume-price profile of the last two days appears indecisive, lacking impulsiveness and commitment on behalf of SUSHI speculators.

For example, on June 22, the day of the new correction low, SushiSwap price closed with a doji candlestick pattern showing a general level of indecision or balance between sellers and buyers. However, the volume jumped above the SUSHI 50-day average, revealing a day with no price progress but with large volume—a classic sign of distribution.

On June 23, yesterday, SushiSwap price closed near the middle of the daily price range with a small gain, and again on higher volume than the average through most of June. It is another example of distribution as market operators use a marginal level of strength to cut or close positions. It is not the sign of a cryptocurrency ready to launch higher immediately. 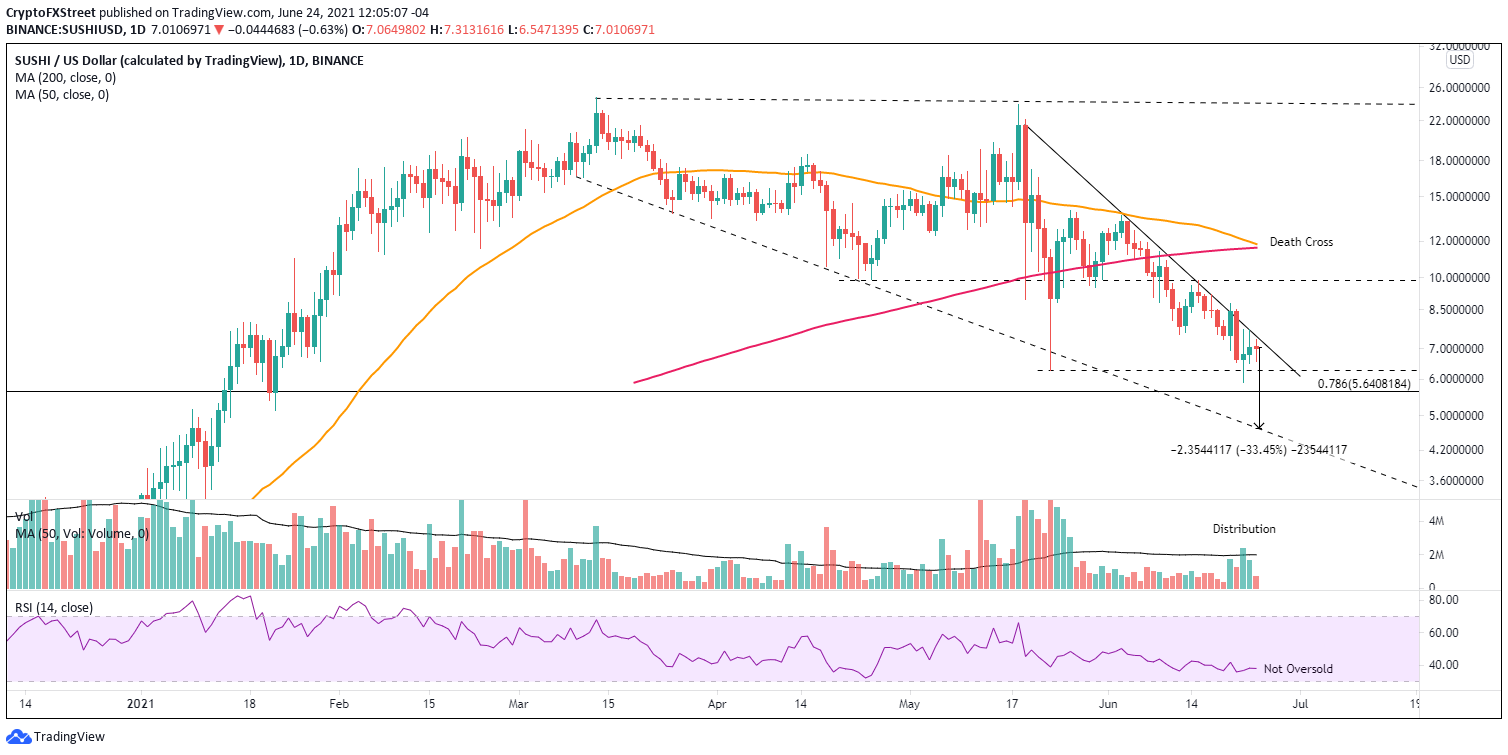 Indeed, SushiSwap price is assisted by the credibility of the March low of $6.28 and the 78.6% retracement level at $5.65. Still, the immediate response to the new low was not an emphatic reversal higher on explosive volume, thereby piercing the May declining trend line that was a resistance barrier earlier in June.

Hence, without conviction, SushiSwap price will be compelled to mark lower levels, likely achieving an oversold signal followed by the aggressive SUSHI bid necessary to build the confidence in a new long-term advance.

Based on the price structure, it is estimated that SushiSwap price might need to drop to the declining trend line from May around $4.80, representing a 30% plunge from the current price. A challenging outlook, but with potentially positive long-term consequences for SUSHI.