Experts believe the current crypto bear market is the worst one ever recorded, as many Bitcoin traders are underwater and continue to sell at a loss. Crypto intelligence platform Glassnode published a report on June 24, 2022, titled “A Bear of Historic Proportions,” and outlined Bitcoin’s current dip below the 200-day EMA.

Analysts at Glassnode consider Bitcoin price’s drop below its 200 EMA an indicator of a bear market. As the Bitcoin price has plunged, net realized losses have been seen their worst performance in history. Net realized profit/loss is a metric that calculates the net profit or loss for all Bitcoins spent over a time frame and is a reflection of the aggregate market sentiment, capital inflows or outflows and trends in network profitability.

Glassnode revealed in its report that the recent drop to the $20,000 level resulted in the most significant daily USD-denominated realized loss in the history of Bitcoin. BTC holders collectively locked in a loss of $4.23 billion in a single day, 22.5% higher than the previous record of $3.45 billion. 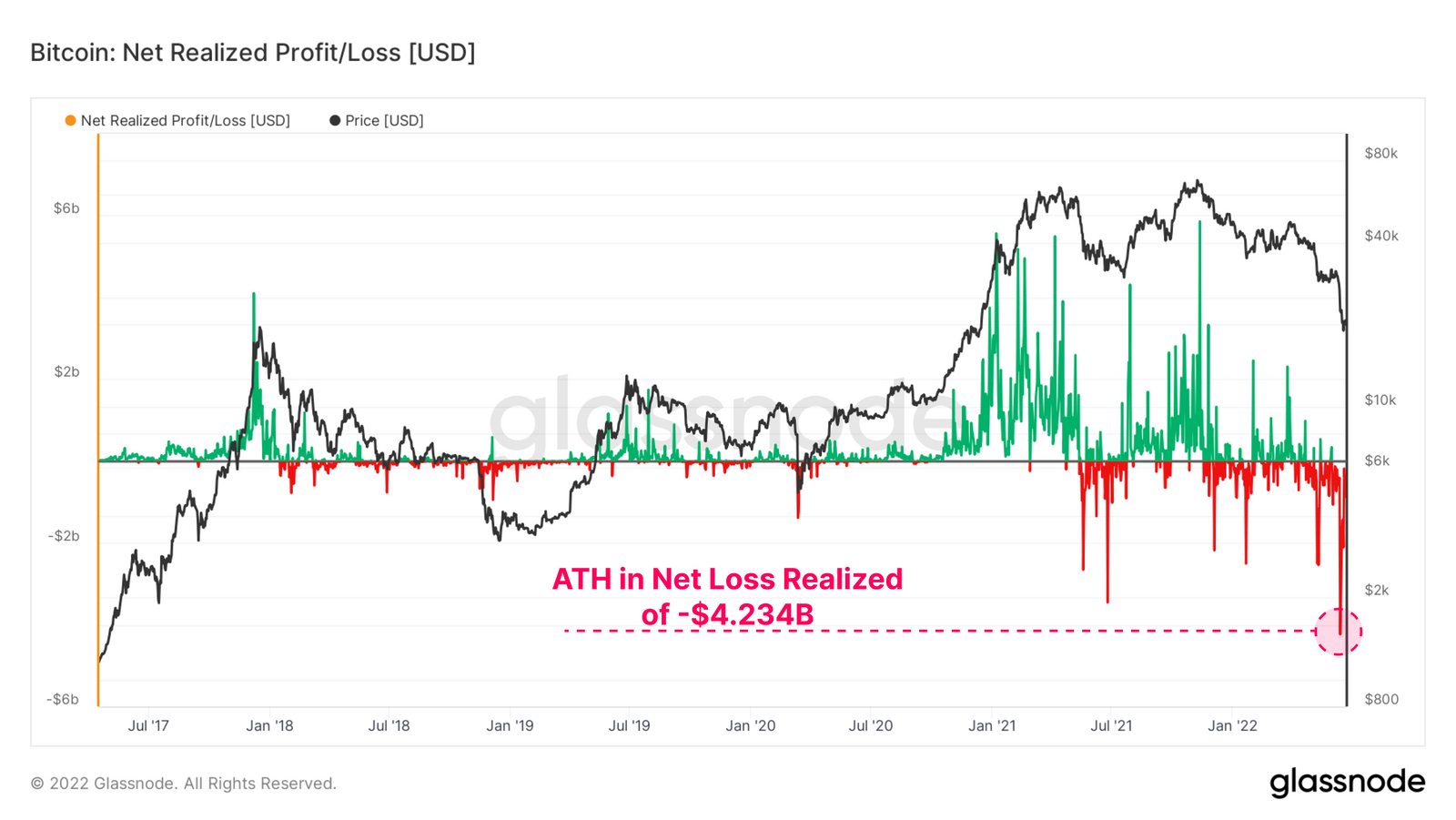 There have been two isolated events in the history of Bitcoin where spot prices traded under the realized price, defined as the value of all Bitcoins at the price they were bought, divided by the supply under circulation.

Bitcoin spot price rarely trade at a discount to the realized price, making it an uncommon event. The previous two times this occurred – the COVID crisis of March 2020 and the capitulation event of November 2018 – signaled market bottoms for Bitcoin.

As spot prices trade at an 11.3% discount to realized prices in the ongoing bear market, it marks the third occurrence of the event. 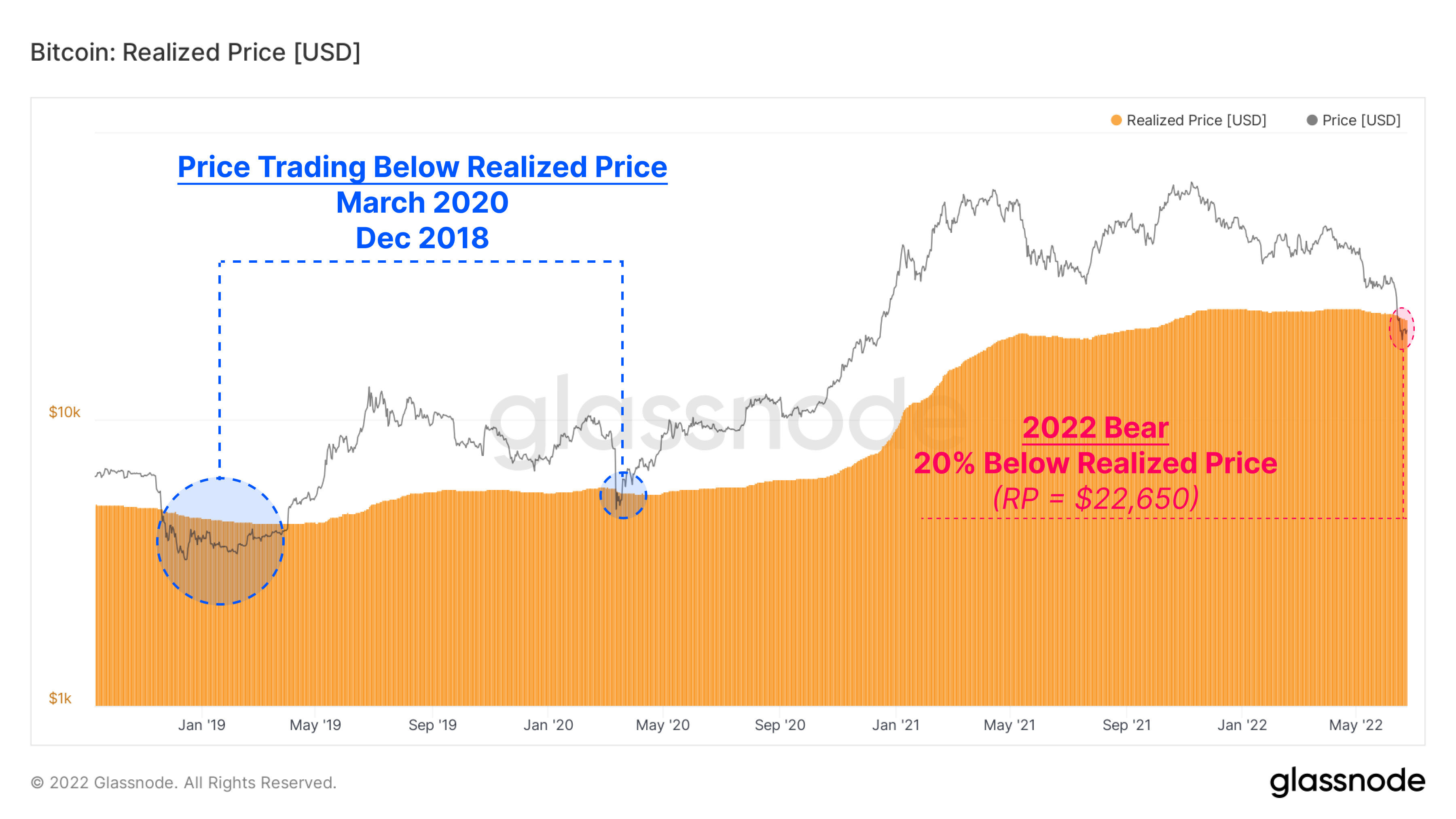 Bitcoin spot price trades at a discount to realized price

Peter Brandt, legendary investor and CEO of Factor LLC, has identified a “big tell” in the Bitcoin chart. Brandt has shared a Bitcoin market dominance chart where he concluded that a decisive close back above 50% would be a huge positive for the asset. At press time, Bitcoin dominance is 40.7% based on data from CoinGecko.

This chart could be the big “tell.” A decisive close back above 50% would be huge positive $btc pic.twitter.com/X9TrEok4GP

@venturefounder, a leading crypto analyst, has evaluated the Bitcoin price chart and metrics to predict a “value zone” for Bitcoin. The analyst notes that historical cycle bottoms have occurred at 84% drawdowns from cycle tops; putting the current downside target at $14,000.

The analyst argues that the ultimate bottom for Bitcoin will be a ‘value zone’,  which represents the area where the most activity occurs and facilitates the greatest trades in Bitcoin.

At historical cycle bottoms, #Bitcoin has usually seen ~84% drawdown from cycle top. As of now, #BTC has already saw a 70% drawdown from this cycle top ($69k), 84% drawdown gives a target of $14k, but from now until the ultimate bottom is definitely VALUE zone for BTC. pic.twitter.com/Aj9j3L6SvD

CryptoBirb, a crypto analyst, told FXStreet that the Bitcoin price is at an inflection point where it could witness a trend reversal. The analyst revealed that he is not making extraordinary moves with his portfolio and is convinced of a bullish reversal in Bitcoin price. For more information, watch this video: