Shiba Inu price is plotting an inverse head-and-shoulders pattern, offering a unique opportunity for investors to participate in a newer digital asset with a timely, high probability entry point. Reinforcing the constructiveness of the bullish SHIB narrative is the successful launch of ShibaSwap on July 6 and the declining supply on exchanges.

Shiba Inu price to reward those that are patient

It is extremely rare for a newer asset to fall 85% over nine days and immediately rebound, recouping a large portion of the loss in a similar amount of time. Instead, the tendency is for the asset to enter a process of knocking out the remaining week holders and releasing the price compression that inevitably results from an 85% decline.

Over the last 55 trading days, Shiba Inu price has methodically charted a bullish inverse head-and-shoulders pattern, marked by several false patterns and breakouts. However, the result not only shows the three components of an inverse head-and-shoulders pattern, the left shoulder, head and right shoulder, but also features a notable reduction in SHIB volume as the pattern has progressed, illustrating that the selling pressure has been largely exhausted.

Currently, Shiba Inu price is completing the right shoulder, which is showing some symmetry with the left shoulder in terms of depth, but it has a longer duration due to the sagging fortunes of the cryptocurrency market. Nevertheless, the pattern should soon resolve higher, with the most relevant resistance coming in at $0.00001204-$0.00001214.

The only complicating factor for the positive pattern outcome is the pressure exerted on Shiba Inu price by the 50-day simple moving average (SMA) at $0.00000797. 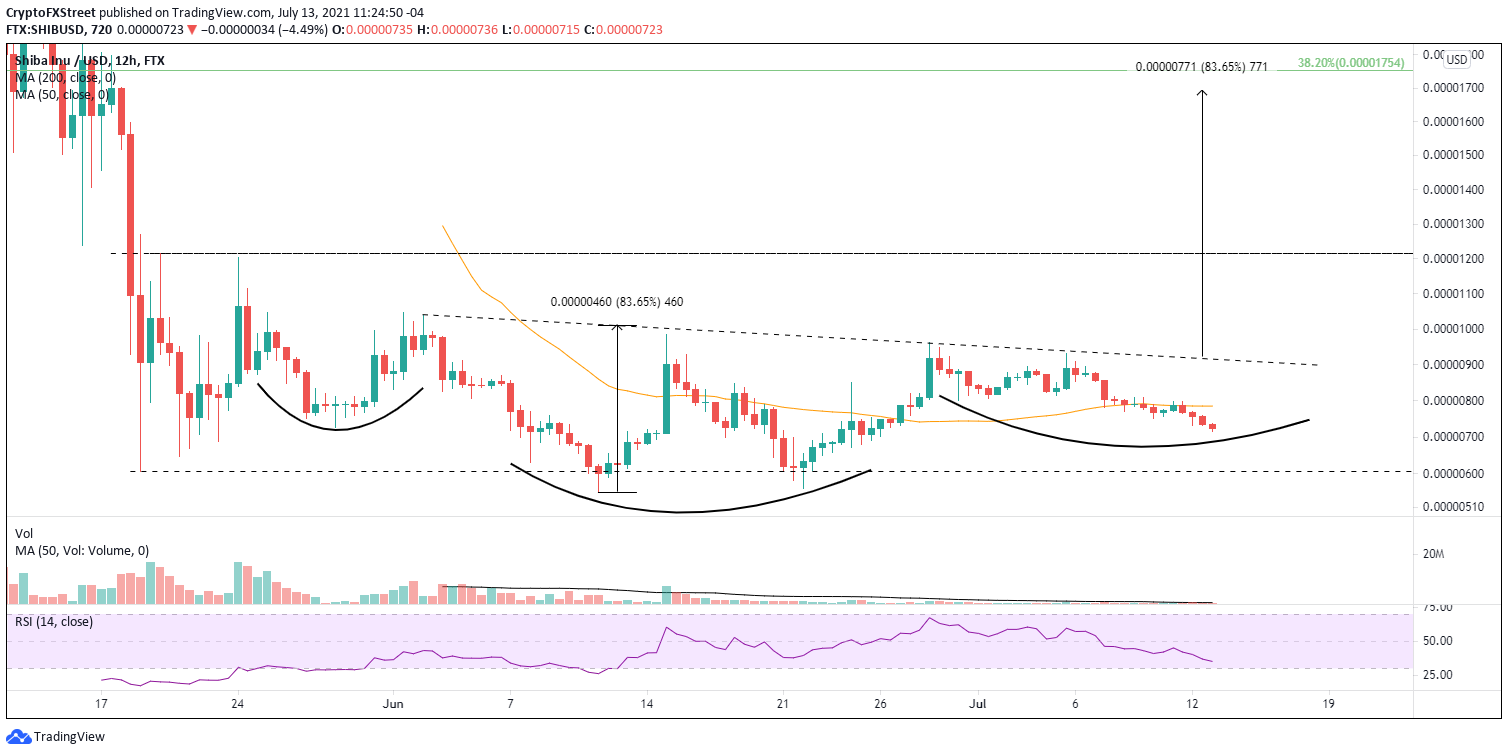 If Shiba Inu price cannot hold $0.00000550-$0.00000560, the constructive outlook will be voided and suggest that the SHIB bottoming process is still not complete, and a more complex price structure is emerging.

It is a rare scenario where a clear and constructive pattern is defined by exact support levels and a timely, definitive entry price while showing diminished selling pressure. Hence, SHIB investors need to be patient and actively watch for a change of fortune in the broader cryptocurrency market to pounce on the opportunity.

Shiba Inu is one of the latest meme digital tokens to gain a foothold in the cryptocurrency space, partly thanks to the widely known story of the Ethereum co-founder Vitalik Buterin donating more than $1 billion in SHIB to the India COVID-19 Relief Fund.

For some time, it was projected that the blockchain project would become part of FOMO lore, and Shiba Inu price would ultimately collapse to $0. Still, the July 6 release of ShibaSwap has injected a level of credibility for SHIB, showing a real-world use. In fact, the swap interface for token holders was received with notoriety and enthusiasm, leading to $1 billion of total value locked (TVL) in just one day after the launch.

It is still early, but the Ethereum blockchain-based project shows staying power based on the Etherscan gas guzzlers. The Shiba Inu: Migrator ranks third, and Shiba Inu: ShibaSwap ranks sixth over the last 24 hours.

Furthermore, the announcement of three new pairs, ETH/USDT, LEASH/BONE and SHIB/BONE, will attract more capital and boost the fundamental story that has the potential to drive Shiba Inu price much higher moving forward.

The Santiment Supply on Exchanges metric shows the total amount of SHIB located in known exchange wallets. Increases in this metric may indicate a spike in short-term selling pressure, while a decrease can signal a reduction of potential selling pressure for the foreseeable future.

In the case of SHIB, the Supply on Exchanges metric now shows the lowest level since early June, but more importantly, the supply has broken below the uptrend line designated by the 30-day SMA. It is the first time below the moving average since the end of March and may mark the exhaustion of weak holders, confirmed by the gradual reduction in the daily volume profile.

Shiba Inu price has a lot to prove. Still, the definite price structure/pattern coupled with the decline of supply on exchanges and the introduction of a fundamental catalyst that demonstrates real-world use, provides the basis for relative strength and projects better SHIB outcomes.

Here, FXStreet's analysts evaluate where SHIB could be heading next as it seems bound for higher highs.