The development around Filecoin, its mining machines and hosting have caused FIL prices to climb violently in the last few days. However, this surge could be coming to an end as a bearish pattern looms.

The9 signs second Filecoin deal in under two months

Filecoin has been growing increasingly popular among Chinese counterparts due to the mining incentives. Hence, The9’s investment deal makes sense. Additionally, the company is known to own and operate an independent node on the Filecoin blockchain.

Moreover, The9 also owned approximately 8 Pebibytes of effective storage mining power in the Filecoin network. This share has increased to 80 Pebibytes after the recent deal was struck.

The news of this caused the Filecoin price to skyrocket 25% in under 16 hours on March 30.

The FIL price has created three higher highs and lows in the last 13 days. A rising wedge pattern is formed when the swing points are joined using trend lines.

The technical formation has a bearish bias that is confirmed after a breakdown of the lower trend line. In Filecoin’s case, a breach of the $138.95 level will trigger a 17% crash, determined by measuring the distance between the swing high and low at the broadest part.

Interestingly, the target is extremely close to the 50% Fibonacci retracement level at $116.13.

Adding credence to the bearish outlook is the preemptive cycle top signal portrayed by the Momentum Reversal Indicator (MRI) on the daily chart. This sign suggests that the Filecoin price might be due for a reversal toward its lower trendline.

Therefore, a breakdown of the rising wedge’s lower boundary could result in a 17% drop to $114.50. 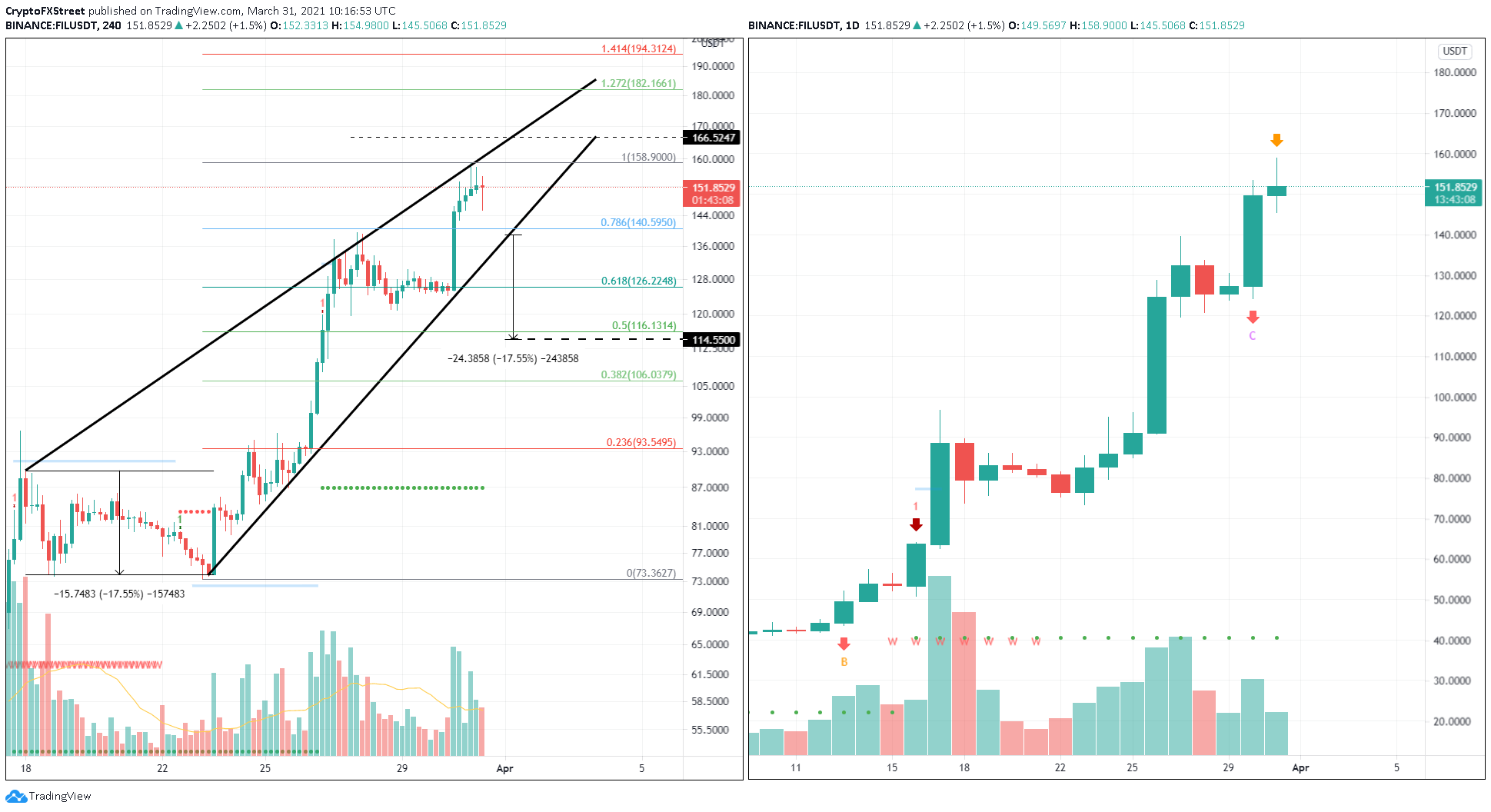 On the other hand, a sudden spike in bullish momentum leading to a decisive close above the upper trend line at $158.90 could jeopardize the bearish thesis.

In such a scenario, the FIL price could surge nearly 5% to $166.52. This move would invalidate the bearish outlook. If the bullish momentum persists, then investors can expect a move toward the 127.2% Fibonacci extension level at $182.16.

Grayscale Investment has a huge name in the crypto space primarily for being the premier Bitcoin fund. However, the situation for the investment firm is slowly turning unfavorable as it continues to take punch after another from all sides.

Will Polygon partnering with Warner Music to launch a web3 music platform push up MATIC price?

Polygon is one of the foremost blockchains in the smart contract and Decentralized Finance (DeFi) space. It is also a leader on the Non-Fungible Token (NFT) front, which is what the Warner Music Group will be leveraging to develop the first-of-its-kind music platform.

Terra's Luna Classic broke out from a range-bound consolidation beginning in December. Investors quickly triggered their sell orders during the uptrend mover and have since forged a steep declining trend. A breach of the $0.00016000 level could trigger a 16% sweep-the-lows event.