Elon Musk has once again rescued the crypto markets after revealing that he personally holds Bitcoin, Ethereum and Dogecoin. The Tesla CEO further disclosed that the electric vehicle company is “likely” to resume accepting the leading cryptocurrency.

The SpaceX CEO joined a panel at “The B Word” conference alongside Jack Dorsey and Cathie Wood. Musk stated that he personally holds Bitcoin, Ethereum and Dogecoin, while his companies SpaceX and Tesla both held the bellwether cryptocurrency.

The multi-billionaire added that he would not be selling any of his crypto holdings, and neither would the two companies he founded. He added that he “would like to see Bitcoin succeed.”

While the crypto community has accused Musk of profiting from encouraging the rise of digital assets over the past few months using his influence on Twitter with over 58 million followers, the entrepreneur stated that he as well would lose money as Bitcoin goes down, but he would still not sell any of his crypto assets.

Musk previously announced that Tesla would halt the acceptance of Bitcoin as payment, but stated at the conference that the leading cryptocurrency appears to be shifting more toward renewable energy and that many coal plants have been shut down in China.

Once it is confirmed that 50% of Bitcoin mining energy usage was renewable, Musk said that Tesla would restart accepting BTC as payment for vehicle purchases again. He added that he is looking to do more due diligence for the final confirmation.

Woods further urged corporations to add the leading cryptocurrency to their balance sheet, citing that BTC would act as “a hedge against inflation.”

Bitcoin price has made a swift recovery since Elon Musk announced his support for the digital asset industry. BTC jumped 11% back to above $32,000 on Wednesday, despite recently losing support at $30,000.

Bitcoin price flashed a bottom signal from the Momentum Reversal Indicator on the daily chart, suggesting that BTC has room for upside potential.

The leading cryptocurrency appears to be recovering slowly, but further buying pressure could push Bitcoin price higher to tag the 20-day Simple Moving Average (SMA) at $32,775, coinciding with the 27.2% Fibonacci extension level. 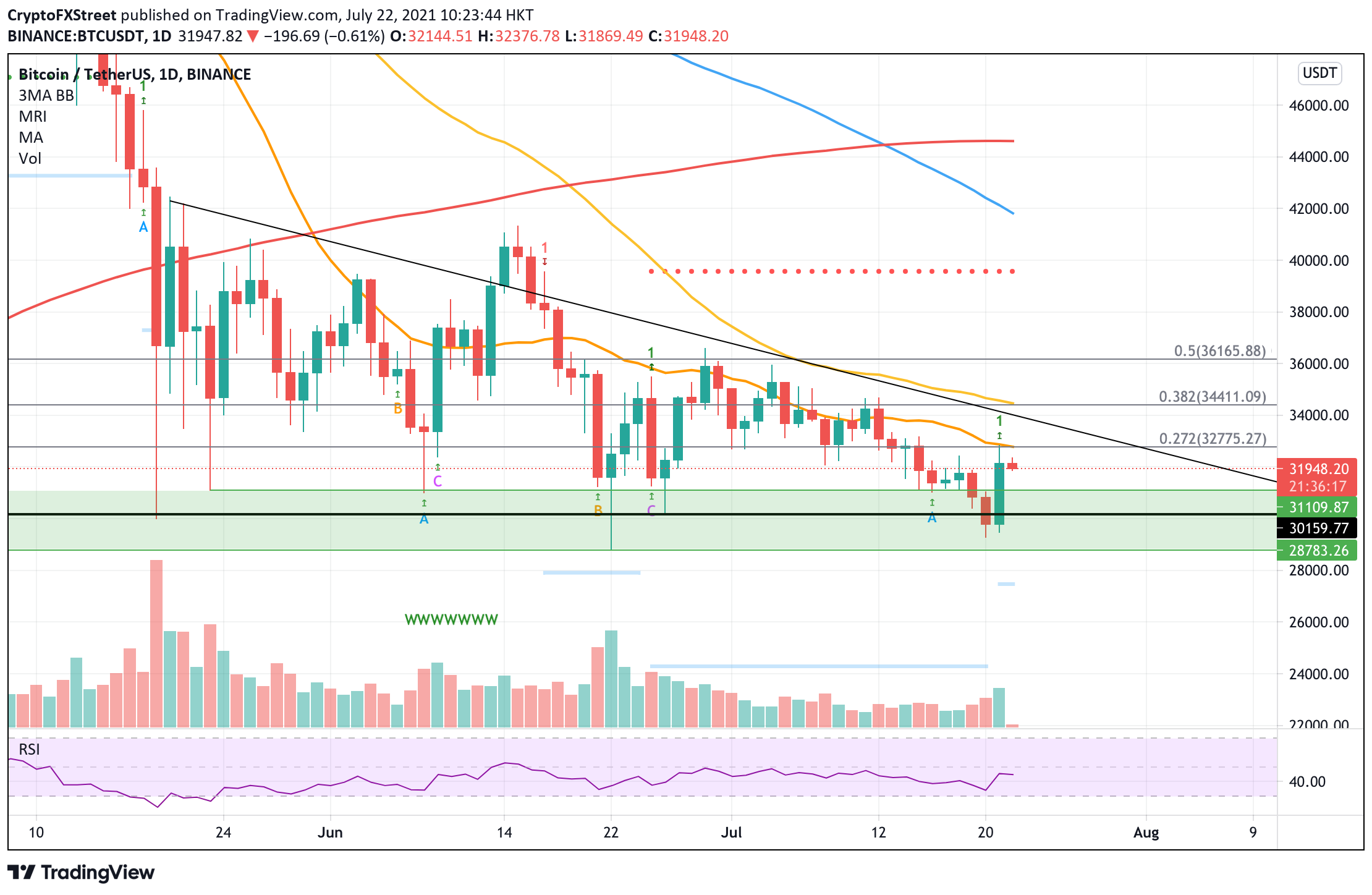 However, only a close above the first line of defense at $31,109 would support the bullish thesis. Otherwise, Bitcoin price could continue consolidating within a tight range, before falling into the demand zone that extends down to $28,783.