Ripple recently reported that it could be having at least 50% of the Indian market under its docket. The company has been very aggressive while pushing for the wide adoption of its fund transfer solutions; xCurrent and xRapid.

Consequently, The Financial Analyst news website reports that the State Bank of India is considering adoption Ripple financial solutions. The bank intends to reduce the time cross-border remittance take to near instant.

Ripple’s presence in India is growing rapidly. Kotak Mahindra Bank announced that it intends to add its 1,300 branches on RippleNet. India’s financial sector is also experiencing massive growth, besides at least $69 billion made it to the country last year. Ripple opened an office in Mumbai in 2017 in order to work on partnerships in the country. Ripple’s CEO, Brad Garlinghouse commented on his company’s activities in India:

“Improving remittances services into and out of India means less fees and more money for families who rely on those funds that are sent home… This trend is increasing across payment providers and banks inside and outside of the country — further underscoring the mounting opportunity in remittances to India from around the world.”

Ripple is down over 2% on the day, however. It is currently correcting higher after retesting $0.43 support. Ripple price broke the support we explore in the previous analysis at $0.4450. It extended the declines below the next support target at $0.435 (current immediate resistance).

The price is currently moving higher after touching the lower Bollinger Band. Similarly, the Bollinger Bands gap is widening to indicate that the bullish trend is strong. The stochastic on the hourly chart is in the oversold, which means that the sellers are getting exhausted and buyers are finding entry positions. XRP/USD will encounter resistance at $0.440, $0.445 (broken support) and $0.450 supply zones. As mentioned $0.430 is the immediate supported, but $0.420 will come in handy in case a reversal occurs. 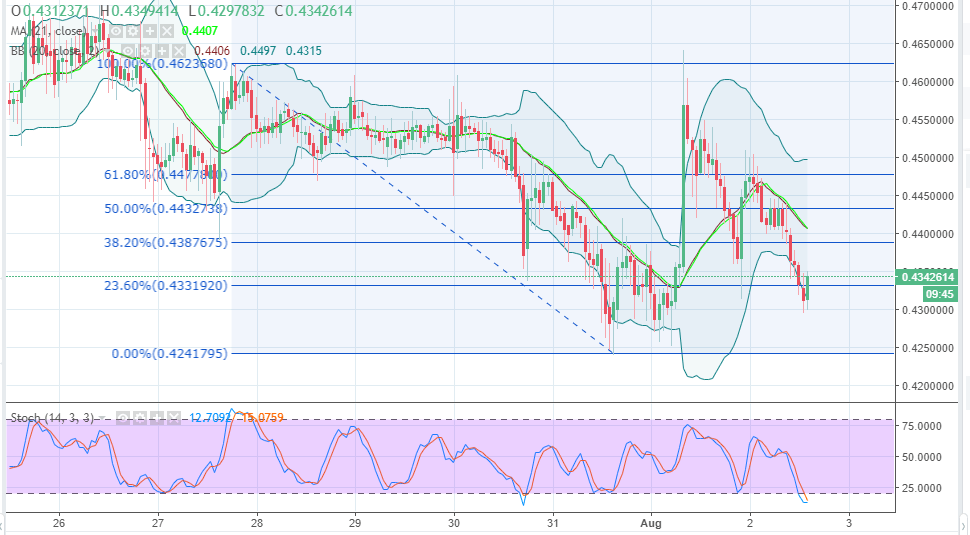