Traders push their SOL/USD bids higher after Solana teases the community with "ignition," a mysterious feature that will go live on Aug. 31.

Solana (SOL) prices rose on Aug. 30 as traders speculated on what appeared to be a key but mysterious feature launch later this week.

The SOL/USD exchange rate climbed to a new record high of $103.06 following a 9.35% intraday rally. The upside move surfaced days after Solana introduced "Ignition" on their official media handles. However, the team provided little details about the tool but prompted the community to guess that it would be about burning SOL tokens.

The speculation surfaced majorly because of Solana's Ignition teaser video, which featured a purple flamed lighter.

Ignition might not be a SOL token burning event

As a public blockchain, Solana relies on SOL to aid two primary tasks: Staking and Transaction Fee. The protocol burns a portion of the transaction fees it collects to keep the SOL supply limited against its 500,000,000 SOL issuance.

However, Solana also creates new tokens based on a "dis-inflationary inflation schedule," wherein the SOL issuance rate decreases periodically after starting at its highest value. Meanwhile, Solana claims that the supply would eventually stabilize at a "predetermined long-term inflation rate."

But if Ignition is a token burn event, it should not deserve a dedicated landing page on the official Solana website. That is primarily because of the protocol's previous SOL burning events that did not see specialized teasers from the Solana team.

Moreover, the Ignition teaser comes with a caption that reads, "The sky’s the limit. What will you launch," with a period Aug.t 31 - Oct. 8, underlining that it could be more an event for decentralized app developers or non-fungible tokens (NFT) creators, and less a token burning episode.

But overall, traders appear to have found Ignition as a catalyst to keep their SOL bids higher. On the day of the announcement, which was Friday last week, the SOL/USD exchange rate jumped 17.62%. The next day, the pair climbed another 9.2%.

Nonetheless, the rally slowed down on Sunday just ahead of hitting the $100-mark, falling over 1.5%. But it resumed the upside heading into the new week, claiming $100 as top digital assets, including Bitcoin (BTC) and Ether (ETH), dropped. 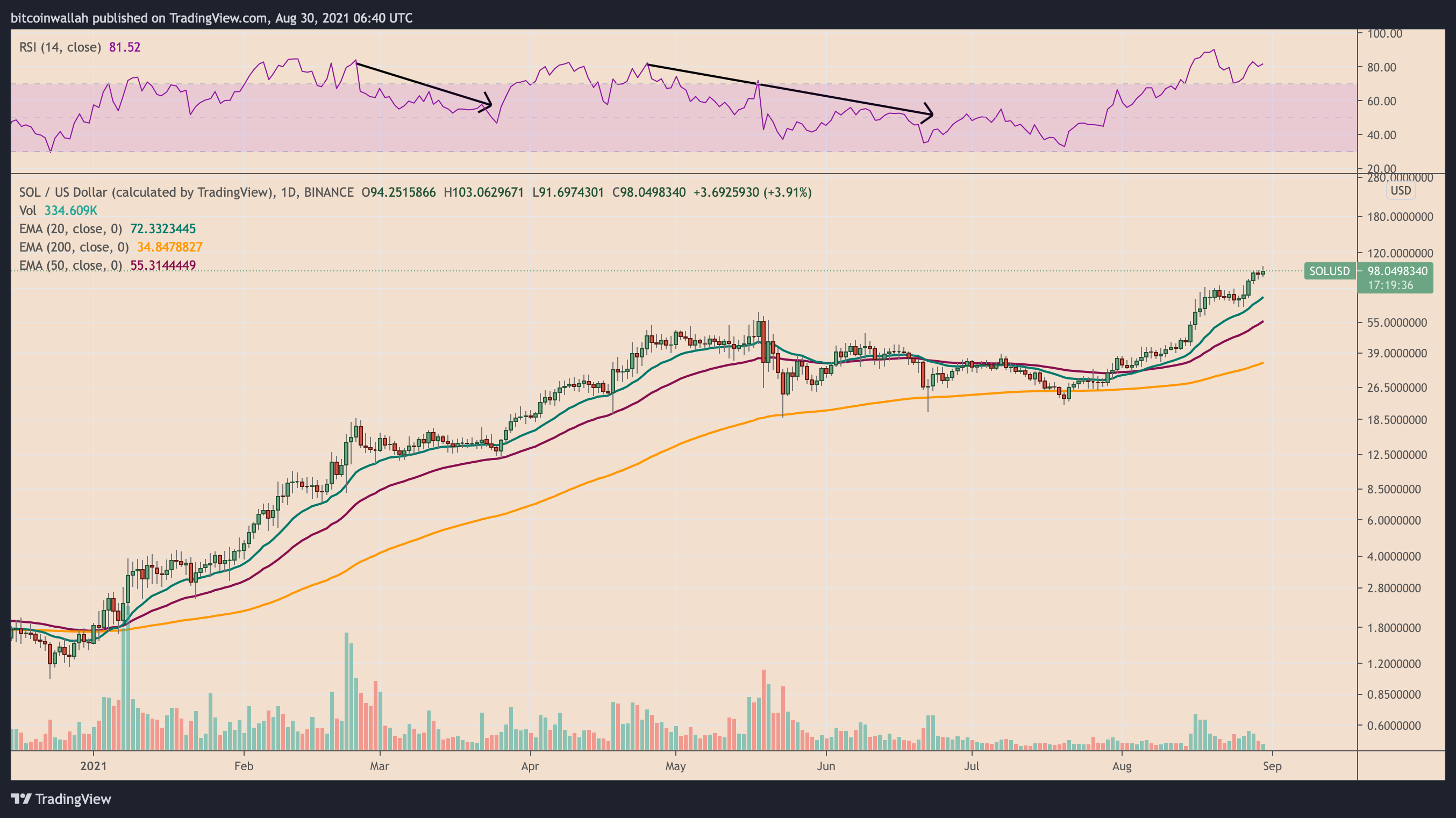 SOL later dropped back below $100 on profit-taking sentiment.

The Solana prices earlier started rallying in the wake of an overall crypto rebound after Bitcoin bottomed out below $30,000 on July 20. Later, SOL/USD picked additional upside momentum on a flurry of optimistic fundamentals, including digital asset manager Osprey Fund's decision to launch a Solana-dedicated fund for institutional investors.

And before that, Solana also forayed successfully in the NFT sector mid-August with the launch of Degenerate Apes—the project sold out 10,000 pictures of comic apes in just eight minutes and raked in 96,000 SOL in volumes (over $5.9 million at that time).

On the flip side, Solana's 369% price boom from its July 20 low of $21.96 turned SOL excessively overvalued, as per its current relative strength index reading (near 81). That amounted to a short-term correction in the sessions ahead.

The views and opinions expressed here are solely those of the author and do not necessarily reflect the views of Cointelegraph.com. Every investment and trading move involves risk, you should conduct your own research when making a decision.