The Senator previously raised concerns about cryptocurrencies being a major threat to the financial system in the United States. Sen. Warren further expressed her worries regarding consumer protection in the digital asset industry.

In response to the letter written by Senator Warren of the need for stricter regulations in the digital asset market, Gensler said that regulators should have “plenary” or complete authority to regulate the cryptocurrency industry.

In the SEC Chair’s view, new legislation should focus on crypto trading, lending and decentralized finance platforms. Gensler believes that regulators in the country would benefit from additional guidelines and rules around digital asset trading and lending.

Gensler sides with Senator Warren, who maintains that investors are not adequately protected in crypto markets and could be vulnerable to losses and other unforeseeable events.

With an increase in crypto oversight authority by the SEC, Gensler stated that the agency could properly monitor transactions, products and platforms in the cryptocurrency market.

Gensler understands that a typical crypto trading platform could list over 50 crypto assets and over 100 tokens. He emphasized that each crypto’s legal status depends on its facts and circumstances, and there could be a possibility that at least one token could be a security.

He further highlighted that many tokens could be unregistered securities, therefore going against the SEC’s regulations. Certain overseas platforms that are unregulated could also allow citizens from the United States to trade through a private virtual network (VPN).

Calling attention to stablecoins, the SEC Chair stated that this type of digital currency could facilitate “those seeking to sidestep a host of public policy goals” connected to the US financial system, including anti-money laundering, tax compliance and sanctions.

Gensler said that the cryptocurrency industry is “falling between regulatory cracks,” as digital asset investors can trade on platforms without a broker at all hours in the day, seven days a week. He concluded that the agency is ready to work with Congress, the Administration and other regulators worldwide to close the gaps.

Although the SEC is able to regulate cryptocurrencies that it considers securities, Bitcoin does not fall within the jurisdiction. The agency stated that the leading cryptocurrency is a commodity under US law and is not subject to the regulator’s oversight.

Bitcoin price is expecting a bullish sign in the coming days, as a golden cross is nearing on the 12-hour chart.

The upcoming golden cross given by the 50 twelve-hour Simple Moving Average (SMA) slicing above the 200 twelve-hour SMA could incentivize buying pressure.

Currently, Bitcoin price is moving sideways before targeting another move higher. BTC could aim for the diagonal trend line at $47,817 coinciding with the breakout line given by the Momentum Reversal Indicator (MRI).

A break above the aforementioned level could be massively bullish for the leading cryptocurrency, targeting the 78.6% Fibonacci extension level at $51,087 next. 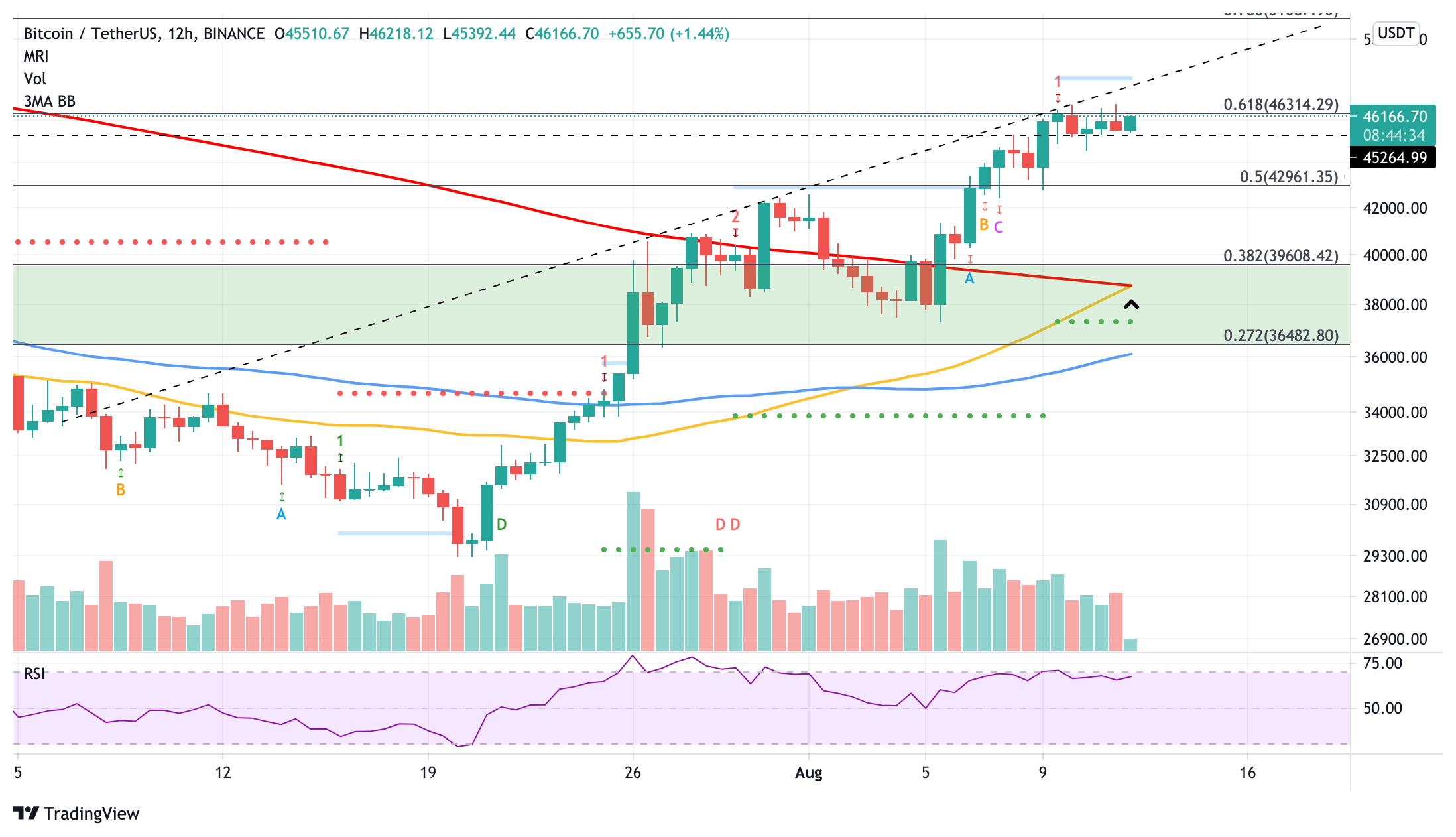 The first line of defense is at $45,264. Should Bitcoin price see a trend reversal toward the downside, $42,961 at the 50% Fibonacci extension level is the next bet.