SafeMoon price took the cryptocurrency by storm following its inception in March, with a run of over 19,000% in the early weeks. Since the massive rally and resulting crash, SAFEMOON has been trending sideways, suggesting it is forming an actionable bottom.

SAFEMOON adoption to benefit from the Safe Earn money project

Safe Earn is the first mover of double reflection tokens by acting as an earning platform. It rewards SafeMoon tokens to Safearn holders at a rate of 8.5%, and those holders are eligible to benefit from the current SafeMoon standard reflections of 5%. The result is 13.5% in rewards, greater profits and broader adoption of SAFEMOON in the cryptocurrency complex.

Instead of the standard 5% reflection given out by SafeMoon already, Safe Earn ups that number to 13.5% in rewards. It’s an extremely new way to nearly triple your earnings.

Safe Earn ran several giveaways to strengthen the launch, with one offering $10,000 USDT to anyone that could get SafeMoon to mention them publicly. It lead to an explosion on SafeMoon’s hashtags.

Safe Earn fills a gap in the decentralization space (DeFi) space. It is a unique opportunity for cryptocurrency investors seeking an alternative source of return in SAFEMOON, particularly valuable when the market has been trending sideways.

SafeMoon price begs for FOMO as it stumbles near the lows

When there is the phenomenon of fear of missing out (FOMO) in the financial markets, investors seek quick, outsized returns, and social media can accelerate the craze. When SAFEMOON first came to the market in March, there was limited interest in social media. Still, it soon jumped in April, driving SafeMoon price higher and rewarding early adopters with huge returns.

Social media volume, tracked by Santiment, continued at higher levels after the crash in April and into the May highs. Still, it has since fallen into a low range that has remained consistent since early June, despite the SAFEMOON bounces.

A sustainable rally will not emerge without the benefit of social media. Still, the renewal of a bid in the cryptocurrency market over the last eight days may convince investors to explore the frontier digital tokens, creating a new rush.

Since the May correction, SafeMoon price has shaped a descending triangle pattern that is nearing the apex. The downward trajectory enforced by the triangle pattern and the 20-day simple moving average (SMA) has left SAFEMoon near a resolution.

The measured move of the descending triangle pattern is 57%, projecting a downside price target of $0.00000111. To activate the pattern, SafeMoon price needs to log a daily close below the May 19 low of $0.00000261, something the altcoin failed to achieve on June 22, July 19, July 20 and July 26. Today, SAFEMOON did briefly trade below the level. 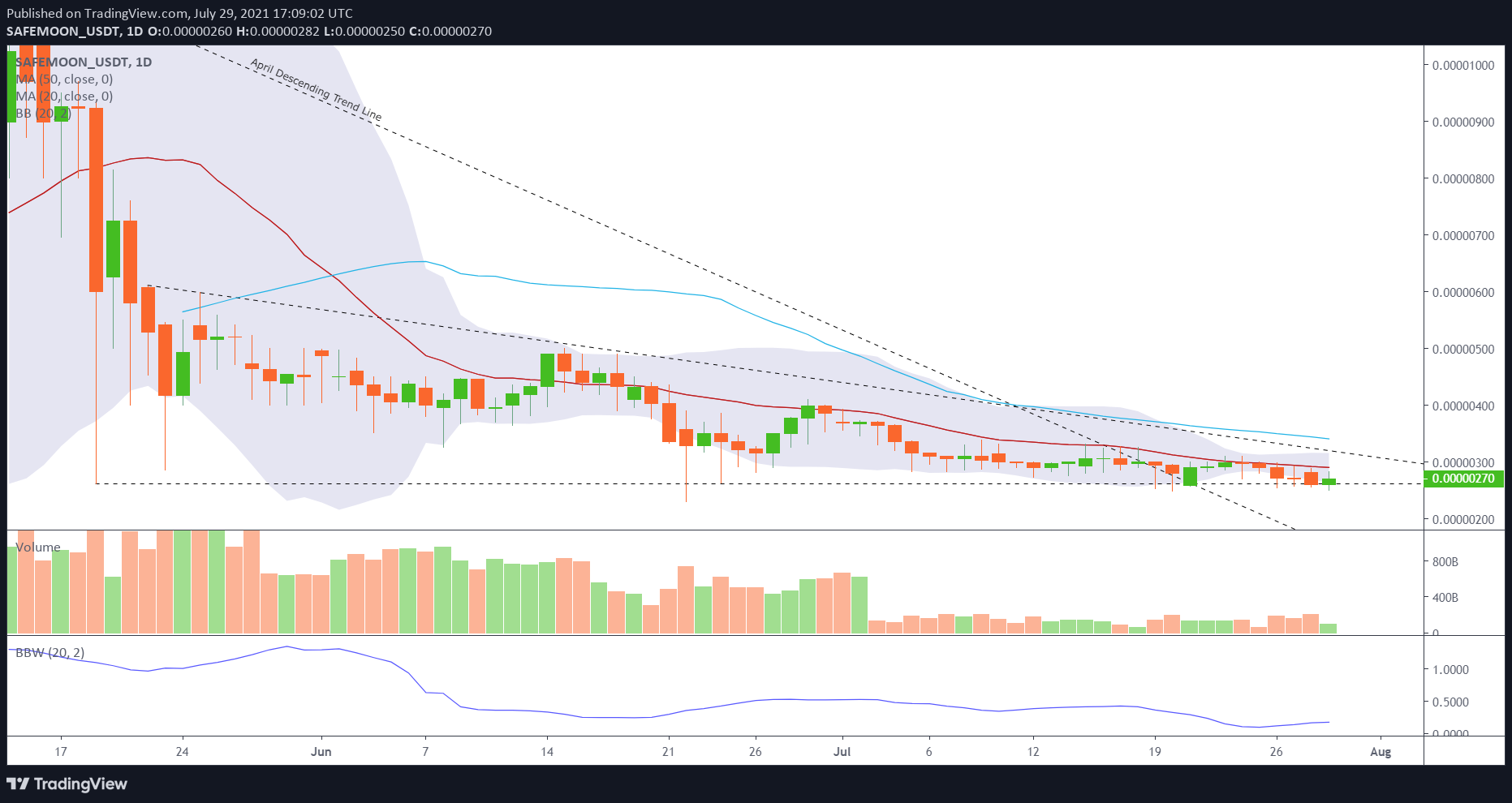 For a rookie cryptocurrency, adoption is critical, and the Safe Earn project provides a source of endorsement by rewarding Safearn holders with SAFEMOON tokens. As the user base grows, so will the social media traffic and perhaps the basis for a renewed rally as SafeMoon price is in the sweet spot for a substantial move.