Safemoon price in the early days was buoyed by the phenomenon of FOMO, fear of mission out, but in and May and June, the digital asset enthusiasm has tapered. The descending channel has offered swing trade opportunities. Still, larger SAFEMOON gains cannot be entertained until a conclusive rise above the channel’s upper trend line and May's declining trend line.

SafeMoon price hit with another report on infrastructure vulnerabilities

Hashex, a blockchain security firm, identified 12 issues with SafeMoon’s native smart contract system, with five of those vulnerabilities being tagged as “critical” and “high-severity” due to their operational severity.

The impact of the vulnerabilities is that SafeMoon’s digital infrastructure is exposed to a large number of third-party intrusions. In the audit, Hashex charges that the platform is open to what is called “temporary ownership renounce,” which can be followed by a rug pull attack. The attack scam, according to the security firm, could cost investors $20 million.

SafeMoon Chief Technology Officer Thomas Smith acknowledged they are aware of issues with the system and that a hard fork in the future is needed to solve the problems.

It is the second audit that has revealed security issues with SafeMoon. Pera Finance discovered that a problem arose when projects forked the gasless holder yield smart contract created by Reflect Financ; they forked the holder yield bug. The contract holder can use the bug, and if used, “a certain amount of tokens from the balances of all users are instantly transferred out, causing them to lose funds."

According to InsurAce.io, it highlights the risks associated with not understanding the underlying technology of new crypto projects.

Launched on March 21 with a SafeMoon price of $0.0000000010, the new cryptocurrency reached $0.00001500 on April 20, rewarding the first adopters with an astronomical return. The magnitude and speed of the advance captured headlines, lifting the number of users to over one million.

The SAFEMOON market capitalization currently rests at $2.23 billion, ranking it #203 in the cryptocurrency rankings with over 585 trillion tokens in circulation, based on CoinMarketCap data. It is relatively inexpensive compared to most digital assets allowing investors to amass positions in the millions of SAFEMOON.

Yesterday, SafeMoon price attempted to release from the descending channel formation. Still, SAFEMOON quickly reversed after tagging the May declining trend line, falling back below the channel’s upper trend line and the 50 four-hour SMA. 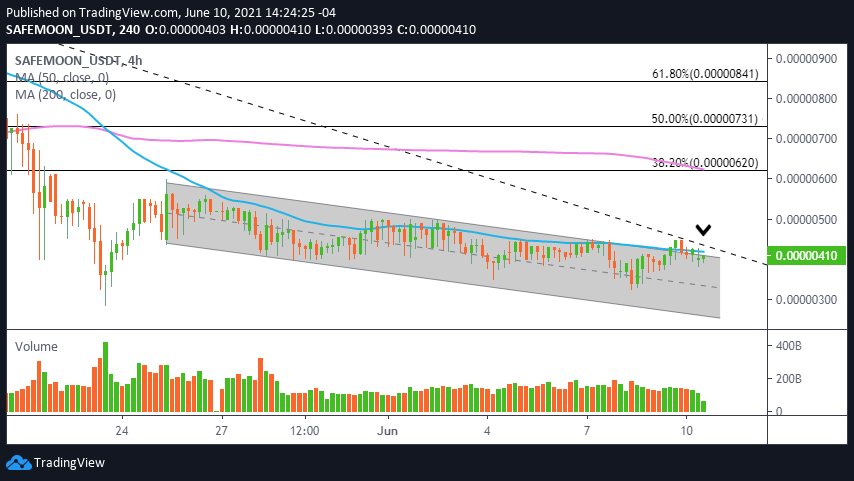 To review, SafeMoon price collapsed 90% after printing the all-time high at $0.00001500 on April 20, demonstrating the importance and brevity of the FOMO impact on a new cryptocurrency.

The concerning revelations from two blockchain security firms remind investors to study and understand the underlying technology of the new cryptocurrencies before allocating their capital. Investing in the cryptocurrency market already carries significant risk; there is absolutely no reason to compound the risk by not becoming better informed about the technology.

Ripple bulls respite to end with blast off to $0.98

XRP price saw a healthy run-up after bleeding excessively over the past three weeks. Investors seem to be booking profits, which has stifled the recent run-up. If this continues, Ripple could bounce off two crucial support levels and restart its uptrend.

Cardano price shows a bullish structure despite the mayhem caused in late May. ADA set up a higher low on June 8, followed by a quick upswing, a common theme across the crypto market.

MATIC price experienced a minor upswing on Wednesday but failed to entice the sidelined investors to jump on board. Additionally, Polygon did not retest a crucial supply barrier during this uptrend, which could indicate that a minor retracement seems likely.

Since June, Shiba Inu price has been locked in a descending channel but holding the outstanding May 19 support during the new selling wave in the cryptocurrency complex. The resulting bounce has stalled at the apex line of a previous symmetrical triangle, a level that served as support in late May.