Ripple's XRP is changing hands at $0.64, having gained over 6% on a day-to-day basis and over 110% on a weekly basis. The coin hit the multi-year high at $0.7824 on November 24 but failed to hold the ground as speculative traders started cashing out their profits. Despite the retreat, XRP is one of the best-performing altcoins out of the top-10.

XRP is currently the third-largest digital asset with a current market value of $29.3 billion and an average daily trading volume of $32 billion.

As FXStreet previously reported, the token of the San-Fransisco-based blockchain startup has enjoyed a steady flow of positive news that created a bullish environment and sent the price to the highest level since September 2018.

However, there may be another massive catalyst behind the impressive rally. The smart contract platform Flare Network announced the airdrop of 45 billion of its brand-new "spark" tokens to XRP holders. The distribution will be based on the XRP addresses snapshot made on December 12.

According to Jehan Chu, a managing partner at Hong Kong-based blockchain investment firm Kenetic Capital, the forthcoming airdrop fuels the XRP bull market and drive Ripple's community into a frenzy.

Flare is a blockchain network based on the Flare Consensus Protocol that integrates with Ethereum's Virtual Machine and allows running Ethereum decentralized applications (dapps) within the XRP ecosystem.

The team also announced that Ripple-related accounts and the accounts of the cryptocurrency exchanges that do no support the airdrop would be excluded from the snapshot.

Other than Ripple inc and the non-participating exchanges, there are a few groups that are entirely excluded from the distribution. These are Jed McCaleb and accounts that are known to have received XRP as a result of fraud, theft, and scams.

The list of the exchanges supporting the airdrop is already available on the website of the project. It includes Bithumb, Bitstamp, Coinfiedl, Coinone, Upbit, Crypto.com, Youholder, and many others.

Flare's native token is an XRP utility fork with the price based on supply and demand. However, according to the preliminary estimates, it will cost about $0.01 at the start. The total issuance is  100 billion tokens.

Traders are buying XRP to qualify for the airdrop

The number of new accounts created on  XRP Ledger spiked from 1,300 to over 8,000 in less than two days, according to data source XRPScan. 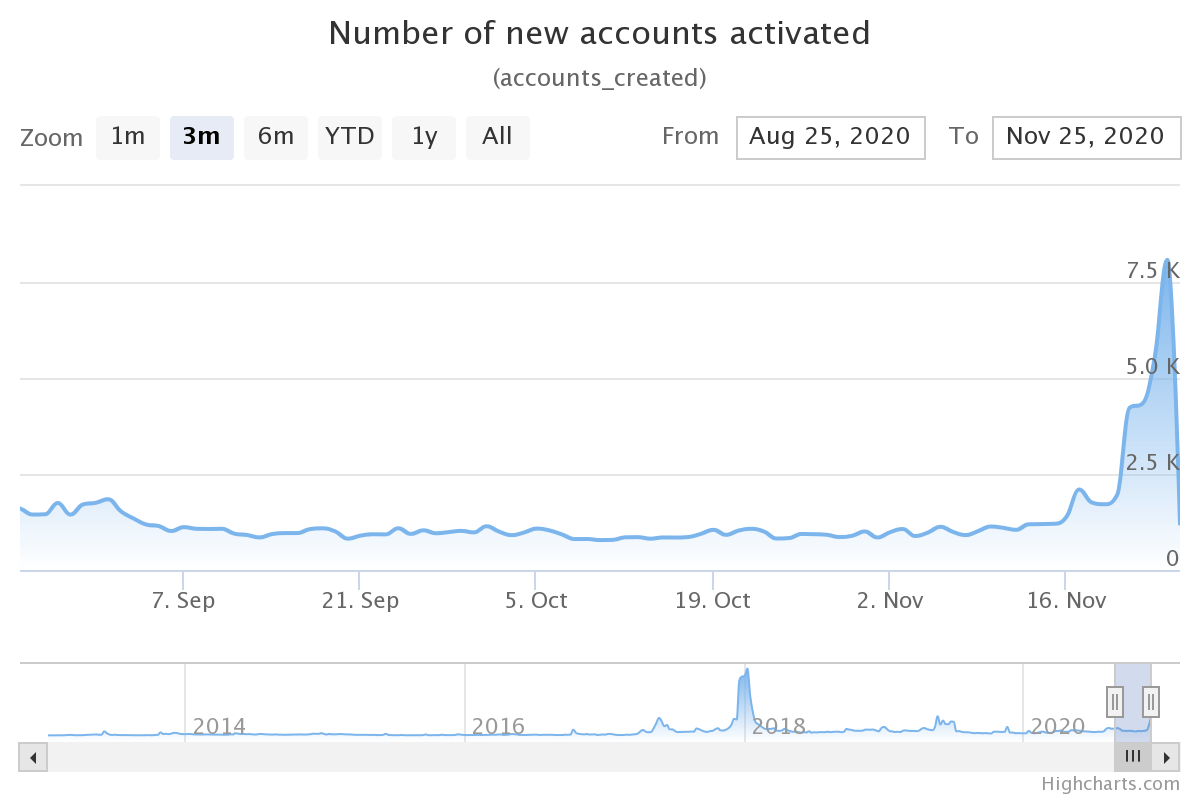 Other on-chain metrics are also skyrocketing as cryptocurrency traders are buying XRP tokens ahead of the airdrop to receive free tokens distributed by Flare. The market often goes crazy pumping the coin before the event; however, the dump is also imminent once the airdrop is over.

According to Phillip Gradwell, the chief economist at Chainanalysis, exchange inflows of XRP has been growing along with the token's price. XRP holders transferred nearly 2.3 billion tokens on the exchange accounts since Saturday. Typically, it is an ominous sign for the asset, as it means that investors want to cash out on their assets.

XRP is currently grossly overbought. Once the market starts unwinding the overstretched longs, XRP may go down like a stone with the first support at $0.5. Once it is broken, the decline may be extended to $0.38 and $0.31.  A sustainable move below this area will reverse the recent rally and invalidate the immediate bullish scenario.