Polkadot price saw a massive uptick in buying pressure on November 1, which pushed it into the price discovery mode for a brief period. However, this run-up was based on fumes, which has led to consolidation under a crucial resistance barrier. A breach of this level is likely to propel DOT to new highs.

Polkadot parachains and crowdloans to pave a new path

Polkadot Runtime has been upgraded to v9122 after the recent proposal on November 4. This implementation will allow the DOT developers to register on the parachains that will open the path to seek crowdloans.

Developers can seek loans via auction from DOT holders. However, the project warns users not to deposit their funds directly but go through a different channel.

Do not transfer any funds directly to a specific account that is associated with a loan or a team. Use the "Contribute" action to record the contribution on-chain using the crowdloan runtime module. When the fund is dissolved, after either the parachain lease expires or the loan ending without winning, the full value will be returned to your account by the runtime.

So far, 12 projects have already completed the crowdloan process, with nine yet to receive the funding.

Unlike Initial Dex Offering (IDO) or other methods, this development will pave the ways for projects and developers to raise capital by registering on the parachains. November 7 marks the fourth anniversary of the Polkadot codebase.

Polkadot price rose roughly 30% after it saw a massive surge in buying pressure on November 1. This uptick, however, failed to follow through, leading to consolidation under the 100% Fibonacci extension level at $53.88. Therefore, DOT needs to flip this hurdle into a support barrier to confirm the start of an upswing.

Doing so will allow Polkadot price to rally to the next barrier at $71.43 after a 30% climb from the current position. While this run-up is bullish, it will indicate that the bulls are back. In some cases, the ascent could extend, allowing DOT to tag the $100 psychological level, coinciding with the 261.8% Fibonacci extension level. 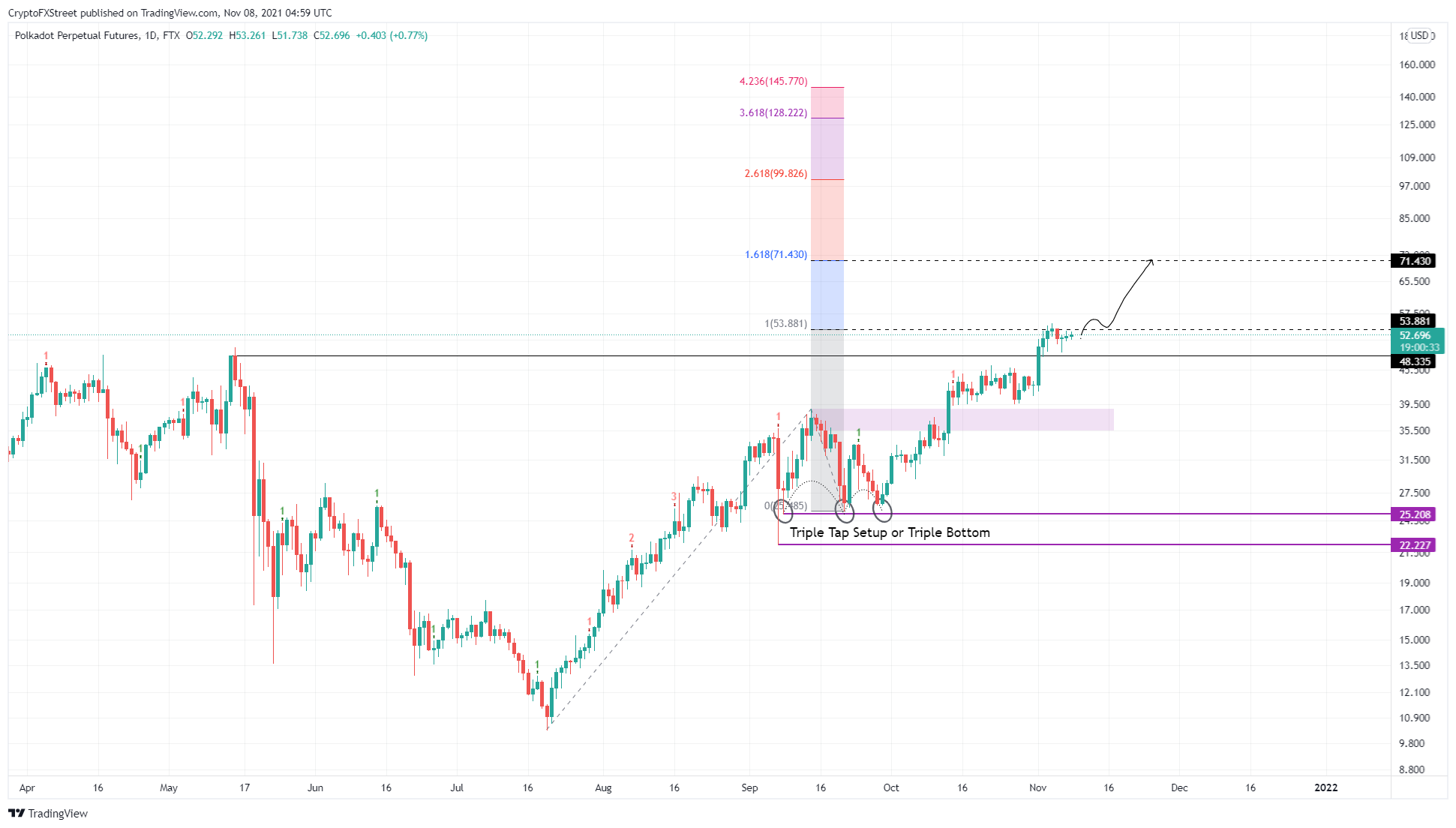 While things are looking up for Polkadot price, a breakdown of the $48.33 support floor will indicate that the selling pressure has risen considerably and could mean that investors are booking profits. A daily close below this barrier will invalidate the bullish thesis and potentially trigger a 19% downswing to the demand zone ranging from $35.48 to $38.76.