Resistance levels under the microscope this week as the cryptocurrency majors stumbled at established barriers. Bitcoin price retracted from crucial $35,500 level, Ethereum price stalled at the 50% Fibonacci retracement level at $2,237 and XRP price strength was paralyzed by the 200-day simple moving average (SMA) at $0.733. The constructive technical developments of last week have not released the momentum to confidently bust through higher resistance levels, putting attempts to disentangle from the recent churn on hold.

Last week’s rebound from the dominant $30,000 price level was the third reminder over the previous six weeks of how vital the level is to Bitcoin’s outlook. The quickness of the rebound and solid weekly close communicated the presence and interest of prominent investors using the risk level to continue accumulating positions. Of course, the rebound involved retail investors, but only large investors can manifest significant outcomes like last week’s bullish hammer pattern.

The bullish close to last week generated a few pivotal moments, including the weekly hammer candlestick, a bullish momentum divergence on the daily Relative Strength Index (RSI), and a complete Elliot five wave down pattern. Adding to the credibility for the week is the Mayer multiple, a ratio of Bitcoin price to its 200-day SMA. It indicates that BTC is cheap relative to its long-term trend.

For sure, the weekly hammer candlestick pattern last week was an ideal conclusion for the volatile week, placing Bitcoin price above the strategically important 50-week SMA at $30,452. The hammer was triggered earlier this week with a trade and daily close above the hammer high of $35,741 on June 29. The bullish price action suggested a building momentum and pointed BTC towards the Anchored VWAP at $37,750 and the 50-day SMA at $38,220.

However, Bitcoin price has reversed the momentum over the last two days and knocked BTC below the hammer high and the noteworthy $35,500 price level, thereby putting bulls on the defensive once again and the flagship cryptocurrency in line for another test of $30,000.

At this point, Bitcoin price needs a daily close above the intersection of the Anchored VWAP with the 50-day SMA to reestablish a bullish trajectory for BTC. 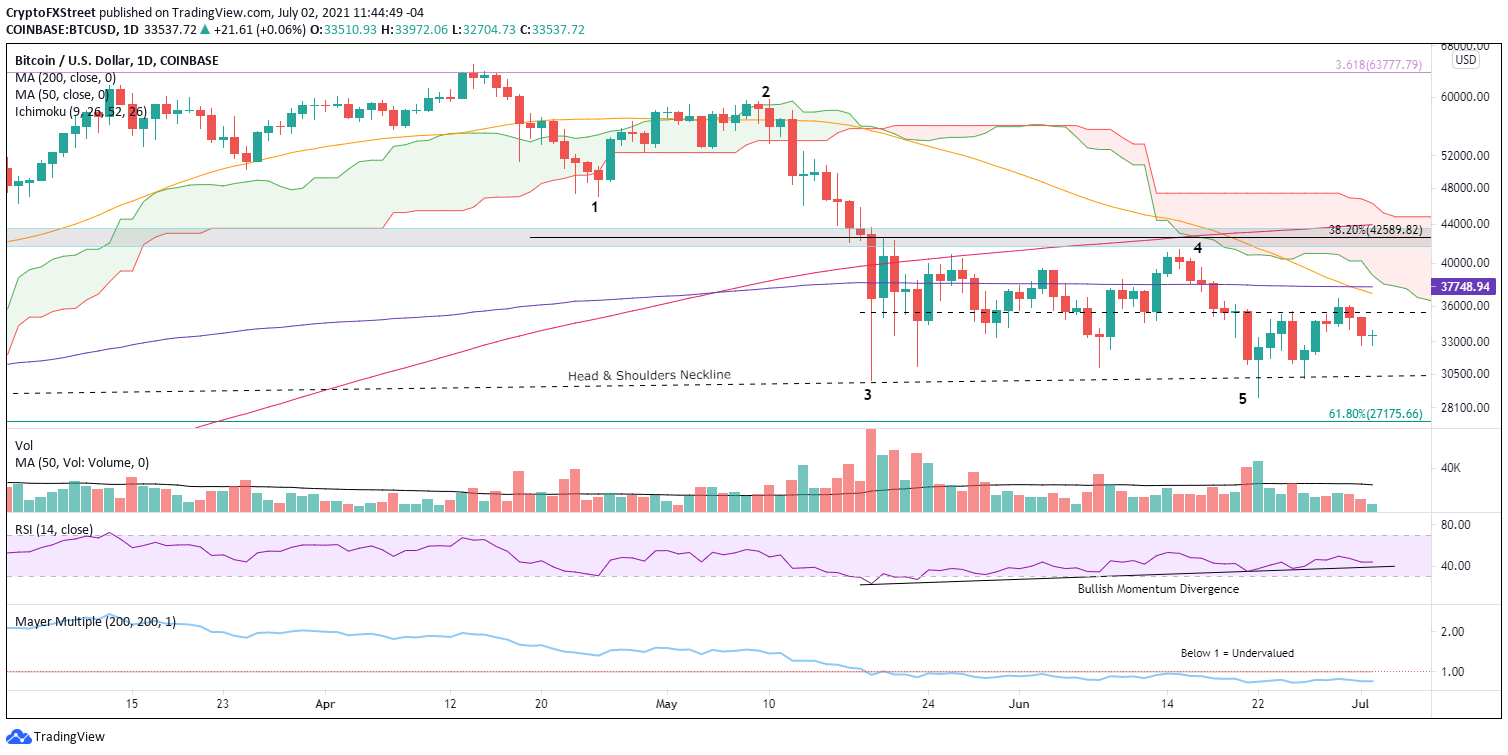 A further divergence from the positive outlook is that Bitcoin price did trigger the neckline of a head-and-shoulders pattern on June 22. The pattern remains active until BTC trades above the right shoulder high of $41,332. Moreover, the digital asset did confirm a bearish Death Cross pattern on June 19 when the 50-day SMA crossed below the 200-day SMA.

As the probabilities swing from one direction to another, the burden of proof still rests on the bulls moving forward.

On June 28, Ethereum price closed above the February high of $2,041, enlisting the first positive step towards higher prices. The positive step was followed by another two strong days, including a daily close above the relevant 50% retracement level of the March 2020-May 2021 advance at $2,237 on June 30. At the close, it appeared that ETH had attracted the momentum to pursue a test of the 50-day SMA at $2,567 and eventually, the apex of the symmetrical triangle at $2,730 and the daily Ichimoku Cloud.

Yesterday’s 7% decline relinquished the 50% retracement level and pushed Ethereum price below the critical February high of $2,041 in early trading today. ETH is still up 6% for the week, but the setback complicates the near-term price structure and the resulting forecast direction. 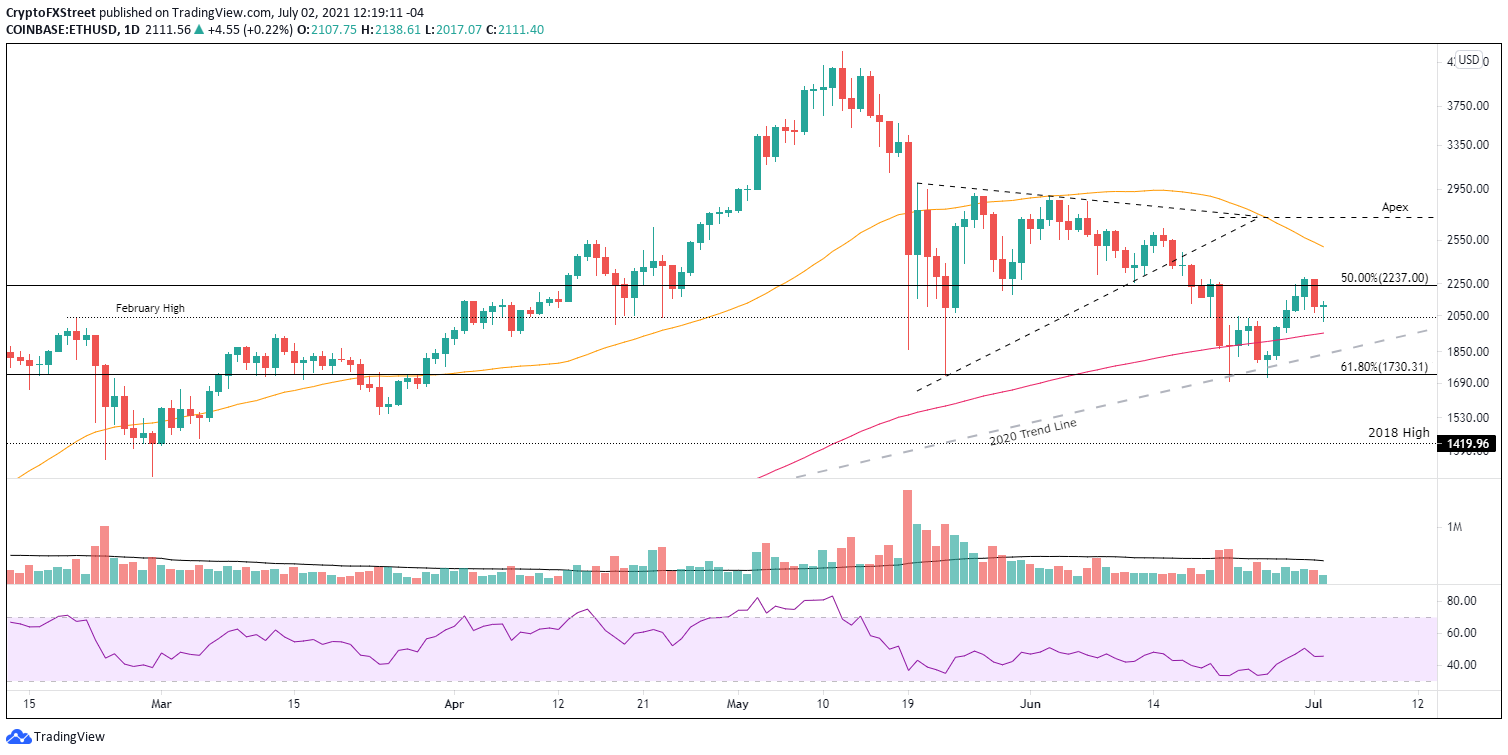 XRP price caught between a rock and a hard place

The 45% rebound was noteworthy, but it lacked the impulsiveness that characterizes meaningful bottoms and the momentum to enable XRP price to conquer the massive resistance around $0.740-$0.760. The result was a bear flag formation triggering yesterday, quickly putting the support level of $0.650 in play. Ripple is trying to hold the level today.

The Ripple bear flag formation’s measured move is approximately 36%, suggesting XRP price will defeat the 78.6% retracement level of $0.555 and the June 22 low of $0.512 before bottoming around the measured move target $0.437.

It is important to note that XRP price has no support of significance below the measure move target, amplifying the pressure on bullish Ripple speculators.

The bearish Ripple narrative is persuasive at this point, and only a daily close above $0.760, the neckline of a multi-year inverse head-and-shoulders pattern, would alter the outlook.

One possible scenario is for XRP price to fall into a trading range between $0.555 and $0.760, thereby creating ideal trading conditions for swing traders due to the hulking support and resistance levels and the resulting 30-40% profit opportunities that lie between. However, for long-term investors, Ripple is dead money under $0.760

Here, FXStreet's analysts evaluate where Ripple could be heading next with a brief technical and on-chain analysis on XRP price.