PancakeSwap price action has not differed from the general trend of altcoins, a big May sell-off followed by a restrained consolidation and then a final plunge on June 21-22 to test or undercut the May low. Since June 22, CAKE has been instructed by the strategically important 200-day SMA, offering few clues about the sustainability of the new rally attempt. For now, the DeFi token and altcoins generally have more to prove before investors can feel secure with their bids.

The second PancakeSwap price purge was halted on June 22 with a doji candlestick pattern that triggered the next day. In general, doji patterns are considered a stalemate between buyers and sellers or a sign of indecision. However, the pattern can motion a trend reversal, sometimes abbreviated and other times sustained. In this case, the doji was a reversal and remains live, but CAKE has had no success carrying the reversal much beyond the 200-day SMA at $13.50.

To achieve a bullish resolution of the trendless price action, PancakeSwap price needs a daily close above $13.82 to kickstart a new rally and convince CAKE investors of a new opportunity. The rally would be confirmed by a trade above the June 23 high of $15.20, offering an additional entry price.

A third confirmation would be a trade above the June 21 high of $16.23, freeing PancakeSwap price to test the declining 50-day SMA at $18.84 and accrue a return of 36% from the initial trigger price of $13.83. The daily Ichimoku Cloud will restrict additional CAKE upside. 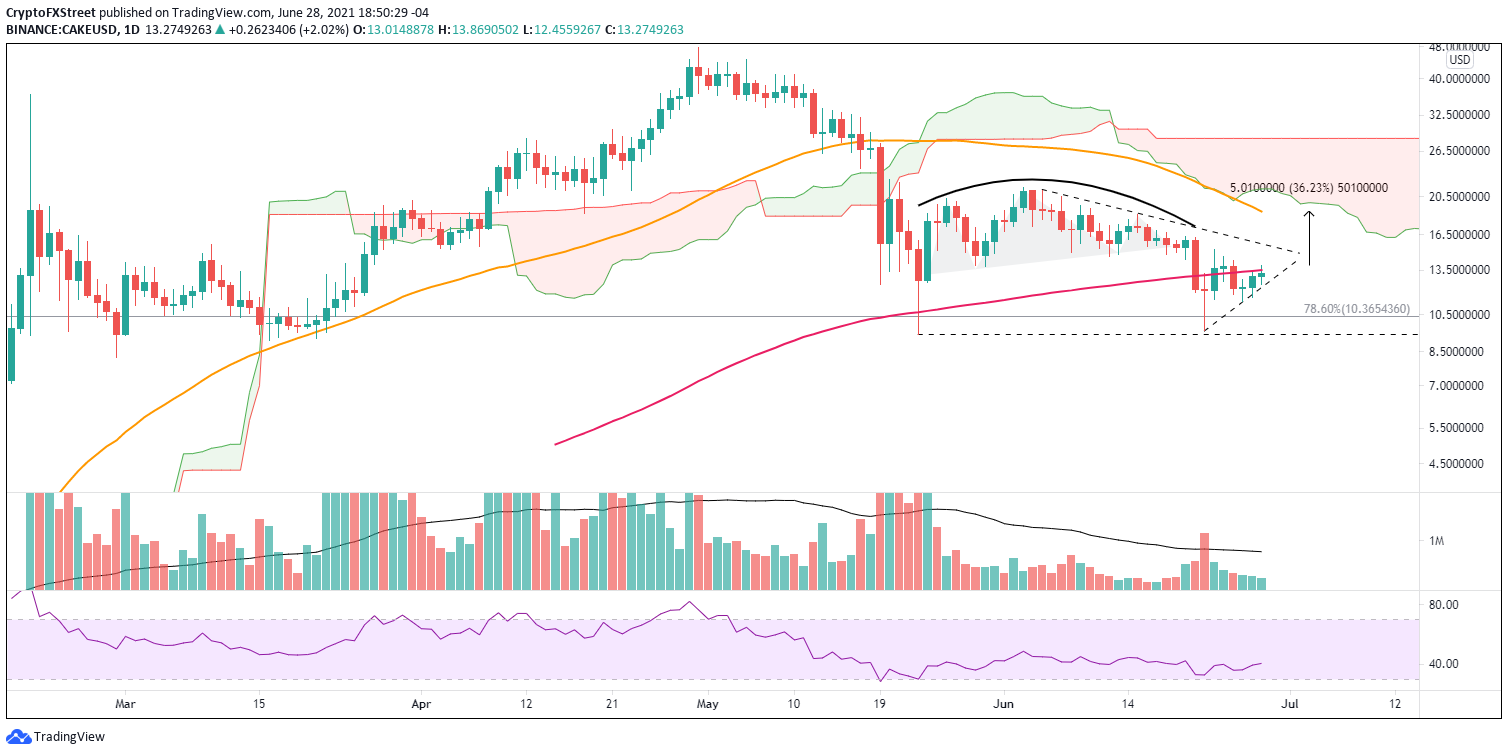 In support of a rally is the improvement in the social media volume as measured by Santiment. CAKE social volume shows the number of mentions of the digital token on 1000 crypto social media channels, including Telegram groups, crypto subreddits, discord groups and private traders chats. The metric just tagged the highest level in 2021, far exceeding the previous high in February and breaking the downtrend of the 30 eight-hour SMA. Of course, the Binance news can explain some of the spike, but there was already an improvement in the coverage before the announcement.

It is important to note that sentiment is a secondary indicator, thus not the prime foundation for investment decisions. Nevertheless, the story of 2021 in the cryptocurrency market has been the role of social media, and without it, many digital assets have faired comparatively worse.

Hence, a burst in social media traffic suggests that CAKE is commanding the attention that may facilitate a conclusive break above the 200-day SMA and stimulate a rally to the 50-day SMA and the 36% return.

CAKE is the native token of the PancakeSwap DeFi project built on the Binance blockchain due to the better fee structure and quicker transaction speeds than the Ethereum blockchain. It is #35 in terms of market capitalization, at $2.49B, making it a higher-tier cryptocurrency but not big enough to dictate the direction of the altcoin space. PancakeSwap price needs a collective surge to build on the constructive doji candlestick pattern or risks establishing a new correction low.

Lastly, it is clear that PancakeSwap price has already moved on from the Binance news with little impact. In fact, it never diverged from following the technicals after the announcement and continues to trade off technicals, suggesting the news was a minor issue for CAKE.