XRPUSD unfolded a five-wave overlapping move from the 0.329 highs, which is in Elliott wave theory known as a leading diagonal.

When diagonal triangles occur in the fifth or C wave position, they take the 3-3-3-3-3 shape that Elliott described. However, it has recently come to light that a variation on this pattern occasionally appears in the first wave position of impulses and in the A wave position of zigzags. The characteristic overlapping of waves one and four and the convergence of boundary lines into a wedge shape remain as in the ending diagonal triangle. However, the subdivisions are different, tracing out a 5-3-5-3-5 pattern.

On the XRPUSD we can see this kind of pattern, as desribed above, completed in the wave A, which means, latest turn up from September lows can be part of a three-wave correction in wave B. We specifically see a three-wave a-b-c move, where wave c of B can retrace towards the Fib. ratio of 38.2 and 0.618 (0.260/0.290 area), where resistance and a new turn lower can be seen. However, in case of a deeper pullback in wave B, be aware of possible resistance at the 0.30 level. 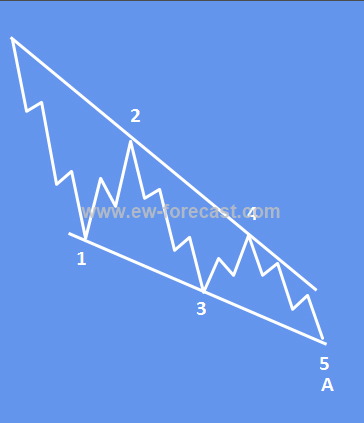 By using Wavetraders website, any services, products, and content contained here, you agree that use of our service is entirely at your own risk. You understand that there is a very high degree of risk involved in trading on the markets. We assume no responsibility or liability for your trading and investment results. The charts, and all articles published on www.wavetraders.com are provided for informational and educational purposes only!