A recent report revealed that institutional investors took last week’s volatility as an opportunity to purchase cryptocurrency investment products, which generated $95 million worth of inflows, marking a 126% weekly increase.

China’s reiteration of a cryptocurrency ban last week shook the market as Bitcoin and many altcoins dipped. However, institutional investors have seen the crypto market crash as a buying opportunity during this time, resulting in $95 million worth of inflows into digital asset products last week.

Over the past six weeks, the total inflows recorded totaled $320 million, as last week marked the sixth consecutive week of inflows. The harsh ban on cryptocurrencies by the Chinese government did not deter institutional investors from the new asset class but instead lured them into the market.

Bitcoin investment products have recorded an increase of 234% week-over-week. The sentiment toward the leading cryptocurrency has risen in September as inflows have been recorded over the past three weeks.

Altcoins continue to track well, as institutional appetite toward Ethereum has also increased in tandem with the amount of Ether staked to ETH 2.0. According to the report by CoinShares, 6.6% of Ethereum is staked to ETH 2.0, and growth in staking is critical for investor sentiment. Institutions also see the blockchain as a potential environmental alternative to other proof-of-stake cryptocurrencies.

Bitcoin price has printed a symmetrical triangle pattern on the 4-hour chart, suggesting that investors are indecisive about the direction of where BTC is headed.

Despite the hesitation seen in the market, Bitcoin price could be preparing for a 16% move depending on a break above or below the governing technical pattern.

Given the current Arms Index (TRIN) reading, which is below 1.0, the market profiile suggests that there are more buyers than sellers. If accompanied by a spike in buying pressure, Bitcoin price could aim for bigger aspirations, although multiple obstacles may emerge.

The resistances for BTC sit nearby, with the first hurdle appearing at the 23.6% Fibonacci retracement level at $42,760, which coincides with the 20 four-hour Simple Moving Average (SMA). The following obstacle for BTC price is at the 50 four-hour SMA at $43,153 before aiming to tag the upper boundary of the triangle.

Should the bulls reach and slice above the topside trend line of the prevailing chart pattern, it then opens up the possibility of a 16% move toward $50,886 for Bitcoin price, given by the technical pattern. 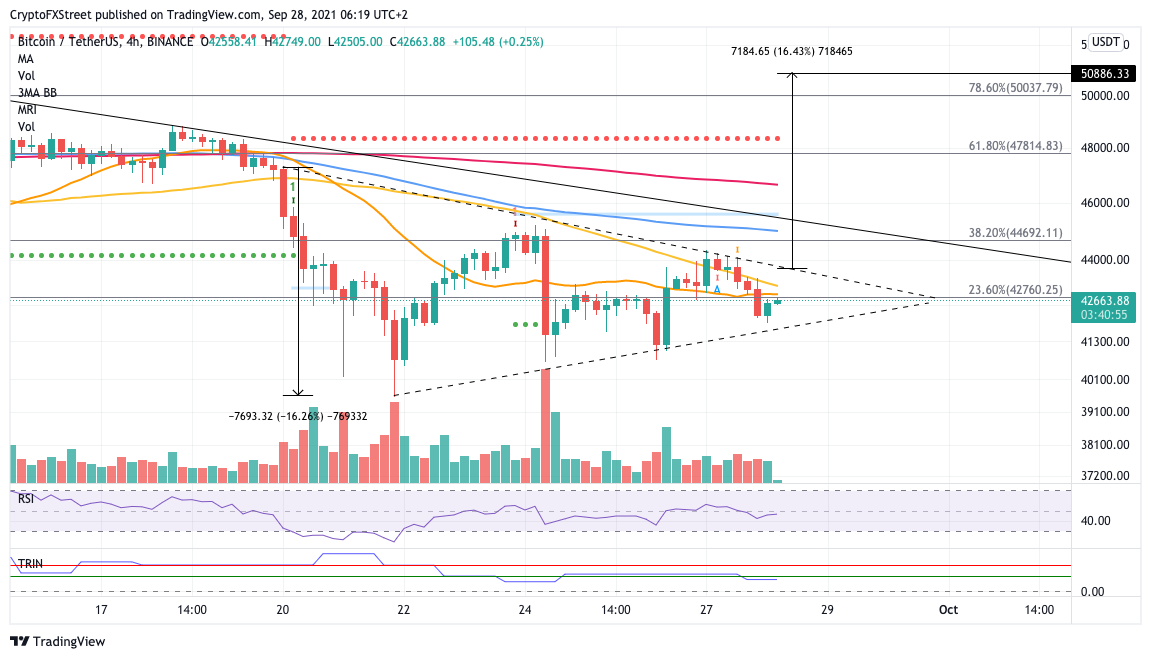 Investors should note that despite the optimistic target, there appear to be multiple roadblocks for BTC, with the first one at the 38.2% Fibonacci retracement level at $44,692.

If an increase in sell orders emerges, Bitcoin price may resort to the lower boundary of the triangle at $41,702 as its nearest support.