Adoption remains strong, but investors move away from BTC

Twitter released an update on September 23, providing Twitter users with a Strike account to tip BTC via the Lightning Network. While the rumors of this development were outed a while ago, this feature will allow users to send money across borders without going through intermediaries like Western Union or MoneyGram.

The social media giant also has plans to include a feature that allows users to sign and authenticate their NFTs.

While this move from Twitter will boost BTC adoption, institutions seem to be moving away from BTC and toward ETH. According to a report by JP Morgan, the Bitcoin futures was in backwardation in May and July, indicating dwindling interest from institutions. Surprisingly, Ethereum futures entered a steep contango in September, suggesting a massive demand from big players. This development could potentially reveal a migration of institutional interest from BTC to ETH, anticipating higher returns.

On a positive note, Robert Kiyosaki, the author of Rich Dad Poor Dad, tweeted that the US was running out of money to print and that the world was going to witness the “biggest crash in history,” according to his recent tweet.

US Gov out of money. Shutdown looming. Dems blame Republicans for the problem. Evergrande Chinas biggest property developer with 800 projects in 200 cities out of money. Get the message? Get gold, silver, Bitcoin, ethereum before the biggest crash in history. Take care.

Bitcoin price tries to whip up an uptrend

On the off chance that it does, the upside appears to be capped around the resistance level at $46,856 and, in an optimistic scenario, at $49,436.

If the bullish momentum continues to increase, there is a slim chance that BTC might tag the $50,000 psychological level. Breaching this barrier will create a higher high, shifting the momentum toward the bulls and giving the buyers a second chance.

The range high at $52,956 could thwart the plans if the momentum does not shatter this hurdle. 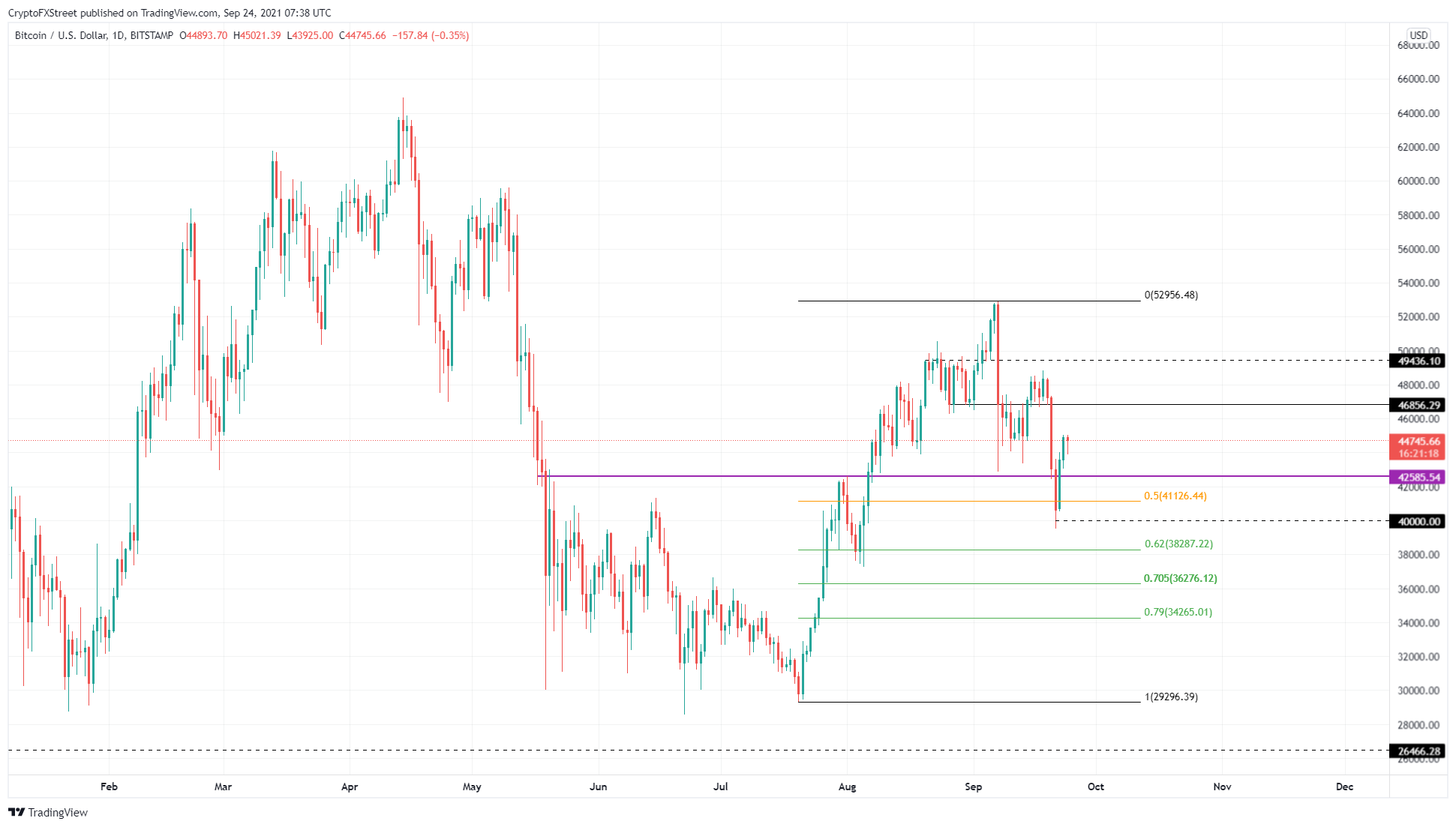 Therefore, a decisive close above $46,000 will push these buyers into the safe zone and reduce the risk of a potential sell-off by a small percentage.

The Net Realized Profit/Loss metric, which calculates the average profit/loss of addresses exchanging hands on a daily basis, has flipped positive. This development indicates that the short-term investors are in profit.

Lastly, the 365-day Market Value to Realized Value (MVRV) model reset on September 21, indicating that the threat of a sell-off, however short-term, has passed. Therefore, market participants can expect a brief rally.

While things seem to be going well for Bitcoin, the hurdles at $46,586, $49,436 and $52,956 will play a crucial role in shaping the uptrend. However, if the buyers fail to step in and take control, the bounce off the 50% Fibonacci retracement at $41,126 will likely revisit the area. If things spin out of control, BTC could slice through it and venture down to retest the swing lows formed on August 3 at $38,287.

In some cases, if the selling pressure is too high, Bitcoin price might wick down to the 70.5% Fibonacci retracement level at $36,276 or $34,265. Signaling a similar outlook is the funding rate of BTC, which dipped into negative territory today.

This move indicates that investors are shorting BTC, revealing their bearish sentiment.

As long as Bitcoin price stays above the range low at $29,296, the bullish scenario will remain intact despite the temporary downswing currently on display. A breach of this level will create a lower low on a macro scale and potentially trigger a downswing to $26,466.