Ethereum (ETH) is changing hands at $381. The second-largest digital asset with the current market capitalization of $17.7 billion has gained over 3% in the last 24 hours and stayed mostly unchanged on a week-to-week basis. Despite the recovery, ETH is still locked in the range. The trading activity has been stable recently, with an average daily trading volume of $13 billion, which is in line with the long-term average figures.

Ethereum whales have been taking money from the cryptocurrency exchanges recently. The on-chain data, provided by the analytical service Santiment, revealed that the amount of ETH on the centralized exchanges dropped by 20.5% in the last two months.

The experts emphasize that the tokes are flowing to the wallets of the top-10 largest market players at an impressive rate, signaling that the whales are confident in the price momentum.

The data provided by Glassnode analysts confirm the findings. The team's recent report shows that the Ethereum balance on the cryptocurrency exchanges dropped to 16.32 million ETH, which is the lowest level in recent nine months.

Other on-chain metrics tell a story

Also, the number of accounts holding over 10,000 coins has been growing steadily since the start of October.  Roughly 16 whales have joined the network from October 8, representing a 1.6% increase in such a short period. Considering that these whales hold from $3.8 million and $38 million in Ether, the sudden spike in buying pressure can lead to sharp price movements.

Apart from that, the 124,599 wallets are now holding at least 32 ETH, which is a new record. This amount is necessary to become a validator in the Ethereum 2.0 network that is expected to go live by the end of the year.

The on-chain data implies that the large players tend to purchase and accumulate ETH, which is a positive signal for the price of the second-largest coin. Partially, the growing interest may result from a DeFi boom, which is a blessing and a curse for ETH at the same time.

From the technical point of view, ETH/USD is moving fast towards the local resistance of $390. This area has been limiting the recovery since the middle of September and has been verified as a strong resistance area on numerous occasions.  A sustainable move above this area is needed for the upside to gain traction with the next focus on psychological $400, followed by $450. 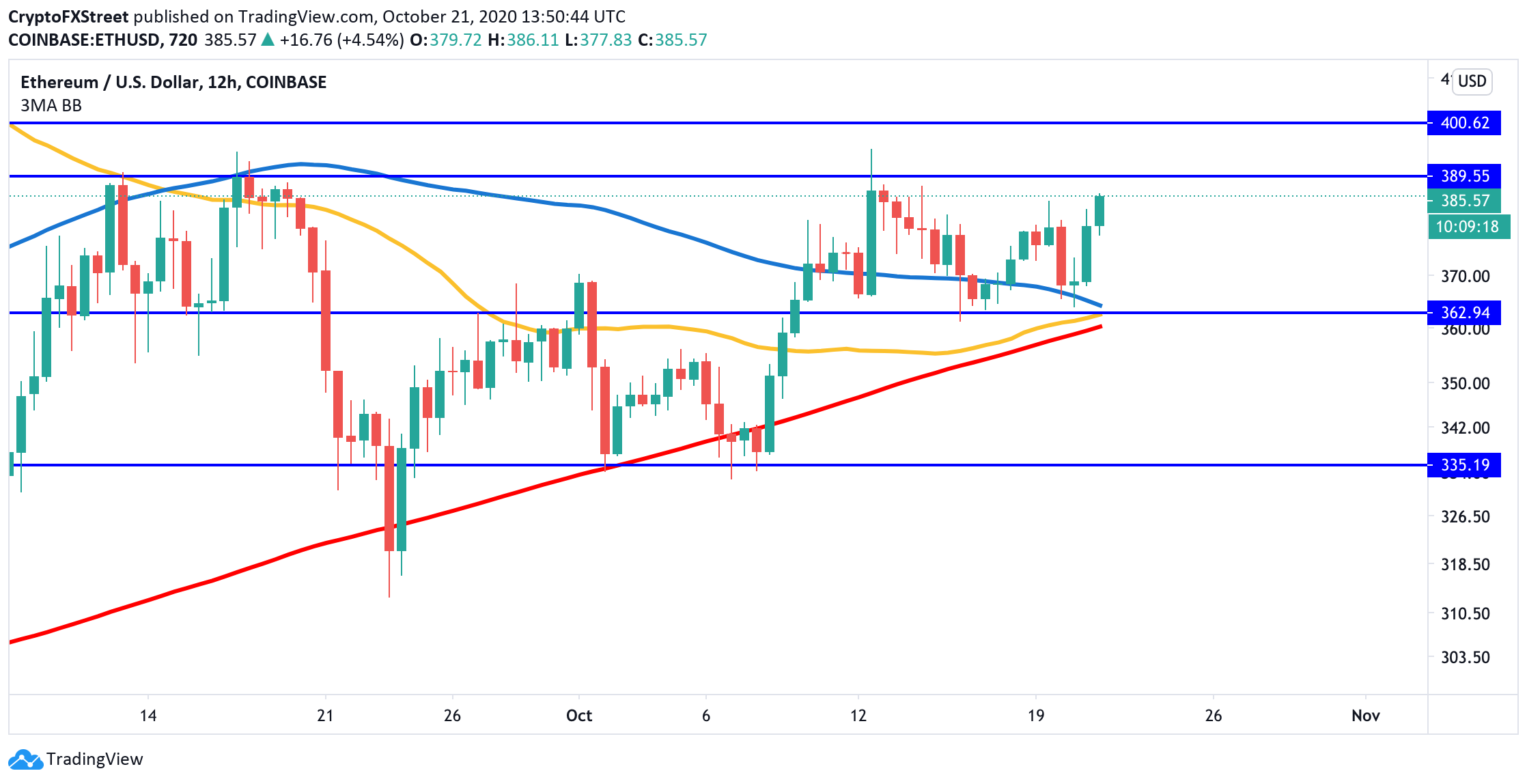 Meanwhile, on the downside, we have formidable support on approach to $360. This barrier is reinforced by a confluence of EMAs on a 12 hour chart, which means the bears will have a hard time pushing through. Once it is out of the way, the selling momentum will start snowballing with the next focus on $335.

Intotheblok's data on In and Out of the Money Positioning signals that the upside is the path of least resistance at this stage as there is virtually no supply above the current price.

Meanwhile, we can see a huge barrier below the current price as over 1.6 million addresses holding 12.45 ETH have their breakeven point at $380. This massive support area has the potential to stop the downside correction and initiate a strong rally above $390 and $400.