Ether’s price rally has revved up investor interest in derivatives tied to the native cryptocurrency of Ethereum’s blockchain.

Open positions in ether futures rose to $11.6 billion on Monday, surpassing the previous peak of $11.25 million reached May 11, according to data provided by Glassnode.

The value has more than doubled since late June, signaling an influx of money into the market, according to Gustavo De La Torre, business development director at crypto exchange n.exchange.

“Ether is constantly on a bullish trend, suggesting that the majority of investors are betting on an increased price surge in the near term,” Torre added. 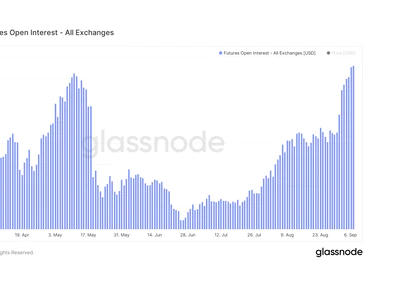 Patrick Heusser, head of trading at Swiss-based Crypto Finance AG, said so-called carry trades have picked up and could be boosting open interest.

Carry trading is a market-neutral strategy that involves buying the cryptocurrency in the spot market and simultaneously selling futures to profit from the decay in the futures premium, or the spread between the two prices. Futures premium evaporates as expiry nears and converges with the spot price, yielding relatively riskless returns for the carry trader. The strategy is typically executed when futures are trading at a significant premium to the spot price.

The quarterly futures premium on Binance, FTX, Deribit, and OKEx has picked up from 5% annualized to around 12% over the past four weeks, per data source Skew. However, premiums are still significantly lower than highs near 40% observed in mid-April and indicate the market is far from being overheated. Premiums may not surge that high again even in times of extreme bullish sentiment as major exchanges like Binance and FTX no longer offer 100x leverage.

Ether, the second-largest cryptocurrency by market value, briefly topped the $4,000 mark on Friday, having picked up a strong bid at lows near $1,800 in July. The cryptocurrency was trading near $3,760 at press time.

“We have seen good spot buying in ether,” Heusser said. “The EIP-1559 upgrade has started to kick in and is being used as a narrative for higher prices.”

The Ethereum Improvement Proposal (EIP)-1559 implemented on Aug. 5 burns a portion of fees paid to miners, limiting the supply of the token. Ether’s daily issuance dropped below that of bitcoin’s at the end of August. On Sept. 3, the daily net emission of ether was -333, the first negative daily print since the EIP activation, per CryptoCompare.