The frenzied rise in the cryptocurrency complex, particularly altcoins like DOGE, has captivated even the most prominent media publications, generating a buzz that is normally saved for other assets such as stocks and commodities.

One of the beneficiaries of the chase for the next high-yielding cryptocurrency is the lesser-known digital assets, such as Digibyte and SafeMoon. For example, SafeMoon has traveled 20,000% since its launch in March, claiming a market capitalization of nearly $3.7 billion and prompting small investors to hold hopes of it reaching $0.01.

The fear of missing out has created an army of speculators living in internet forums with no regard for the underlying fundamentals or if the assets will ever gain widespread acceptance. In contrast and with the usual spite, the institutional community is quick to squash the enthusiasm with hyper-speculation that is doomed to create far more big losers than gainers.

Some of the  origins of the mania include individuals like Elon Musk, perhaps the biggest DOGE fan, as well as Mark Cuban, Gene Simmons and Snoop Dogg to name a few. Their support has been fundamental to the rise of DOGE, and as a result, lesser-known cryptocurrencies.

Mike Novogratz, the founder of Galaxy Digital, was a bit more romantic about the DOGE rally while speaking on CNBC; “when you think about the full spirit of what this crypto revolution is, there’s something pure in what Dogecoin has done.” Novogratz did admit that he worries that once the enthusiasm fades, there are no developers or institutions interested in the ecosystem.

Amidst the celebrity and media attention, there is a genuine revolution in digital assets, but there is no doubt the future is not transparent for all. As US regulators clarify their oversight regulations and authorities introduce taxation policies, the end will become more apparent, thereby solidifying the fortunes of many altcoins and relegating some to fad status.

A recent FXStreet article projected that Dogecoin price strength would ignite consecutive days of 30%+ gains, and that was the case on Tuesday and Wednesday at the intra-day highs. Until then, Dogecoin price had rallied almost methodically, with average gains and minor daily declines, but never consecutively.

The near test of the 138.2% extension yesterday was a milestone for the rally and may have marked a short-term high for Dogecoin price. However, as is the case with other cryptocurrencies, the magnet effect of the psychologically important $1.00 may be enough to catapult DOGE higher with a possible test of the 161.8% extension of the April decline at $1.014.

As a minor point, take note of the value of monitoring daily price action. On April 23, Dogecoin price closed with a bullish candlestick formation that raised the odds that correction was complete. The next day DOGE triggered a new buy signal when it traded above the hammer high, leading to a 170% gain for the attentive speculator 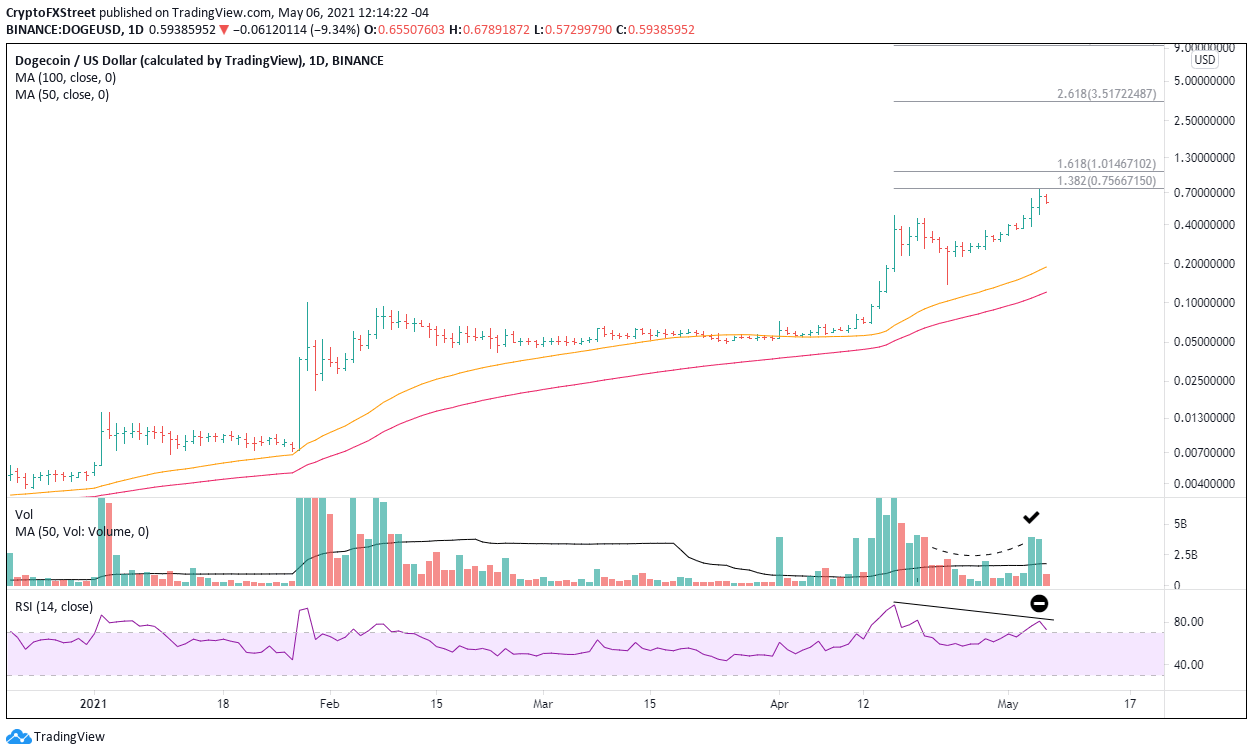 The daily Relative Strength Index (RSI) is flashing a bearish momentum divergence, a condition that emerges when the RSI does not print a new momentum high with the price. It could be a signal of a pending correction, but it should not be overstated.

Nevertheless, speculators should focus their attention on the April 16 high at $0.470 as bonafide support. A failure to hold will severely undermine the race for Dogecoin price to strike $1.00.