Several top DeFi tokens are posting impressive gains this week as investors remain on the hunt for alternative opportunities for returns as the upbeat market mood surrounding cryptocurrencies remain intact.

AAVE retreats after climbing above $70

Earlier in the week, AAVE touched its highest level since its introduction into the market at $70.44 before staging a technical correction. As of writing, Aave is trading around $59, gaining nearly 40% in the past seven days. IntoTheBlock's IOMAP shows more than 600 addresses bought 4.39 million Aave between $55.70 and $57.50, suggesting that the price is likely to face strong support in that area. On the other hand, 427 new addresses that bought AAVE between $63.30 and $64.70 could look to break even when the price reaches that level and keep the upside potential limited.

SUSHI gained nearly 40% on Friday and came in within a touching distance of the key psychological level of $1. Following this impressive rally, a technical correction followed on Saturday but SushiSwap is still up nearly %30 for the week at $0.8700. According to IntoTheBlock's IOMAP, 18 new addresses accumulated a total of 6.2 million SUSHI between $0.8755 and $0.9000, making this area a critical hurdle before price could target $1. On the flipside, 12.85 million SUSHI were bought by 289 new addresses between $0.8172 and $0.8422, marking this area as the likely completion point for a correction.

UNI could extend correction to $3.20

UniSwap rose to its highest level in five weeks at $3.9750 on Friday but struggled to preserve its bullish momentum. At the moment, UNI is losing 5% on the day at $3.6577 but is up 26% since the start of the week. The Relative Strength Index (RSI) indicator on the 4-hour chart touched its highest level at 80 on Friday and UNI seems to have gone into a consolidation phase. On the downside, the correction could continue to $3.2, where the ascending trend line coming from November 5th and the mid-point of the Bollinger Band merge. If this area holds as support, the price needs to make a daily close above $4 in order to continue to push higher. 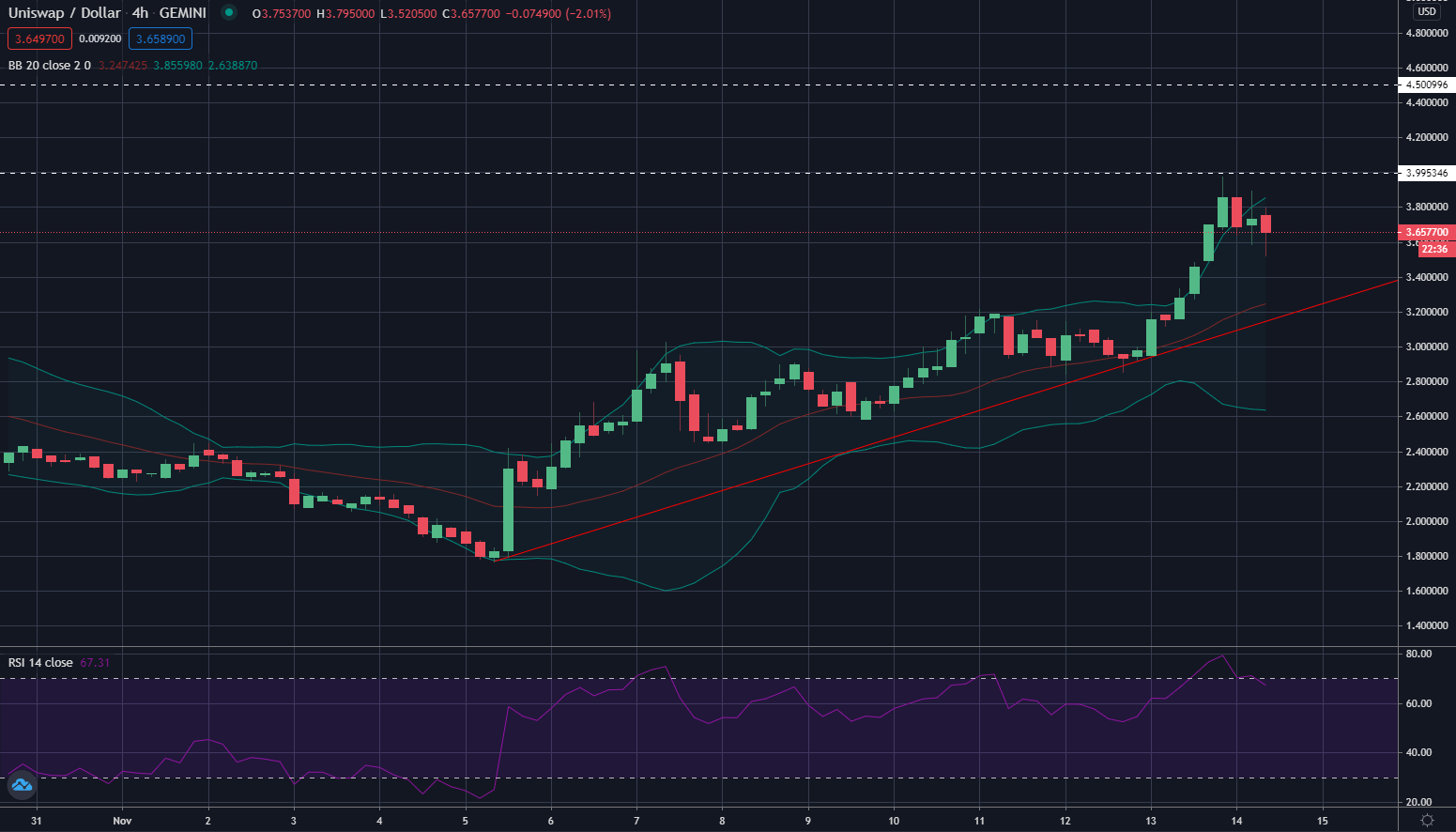 Although DeFi tokens have struggled to find demand in the past few weeks, the cryptocurrency market's broad-based rally triggered sharp upsurges in Uniswap, SushiSwap and Aave prices due to their relatively small market cap. The sentiment surrounding the crypto space is likely to continue to impact these tokens' performances.