An exchange token valuation methodology suggests that SUSHI trades at a 33% discount and that UNI price is 36% overvalued.

Just looking at Binance Coin's (BNB) reported market capitalization, one might conclude that the token is the dominant asset when compared to other exchange tokens.

Although there is no direct relationship between Binance's exchange volume (or revenue) and token economics, traders seem to use it as a proxy. The controversial burn mechanism has been losing impact since April 2019, when the exchange changed the BNB whitepaper.

Initially, the whitepaper proposed a plan where BNB tokens equivalent to 20% of the exchange's profit would be bought under a "repurchasing plan", but the new version scrapped that plan.

However, excluding the 60 million BNB that have never been in circulation drastically changes the outcome because these excess tokens are meant to be burned over time.

The remaining exchange tokens are inflationary, meaning the issuing rate is very steep. For example, Uniswap (UNI) has 611 million tokens in circulation, but that number is expected to reach 1.14 billion in 10 years. 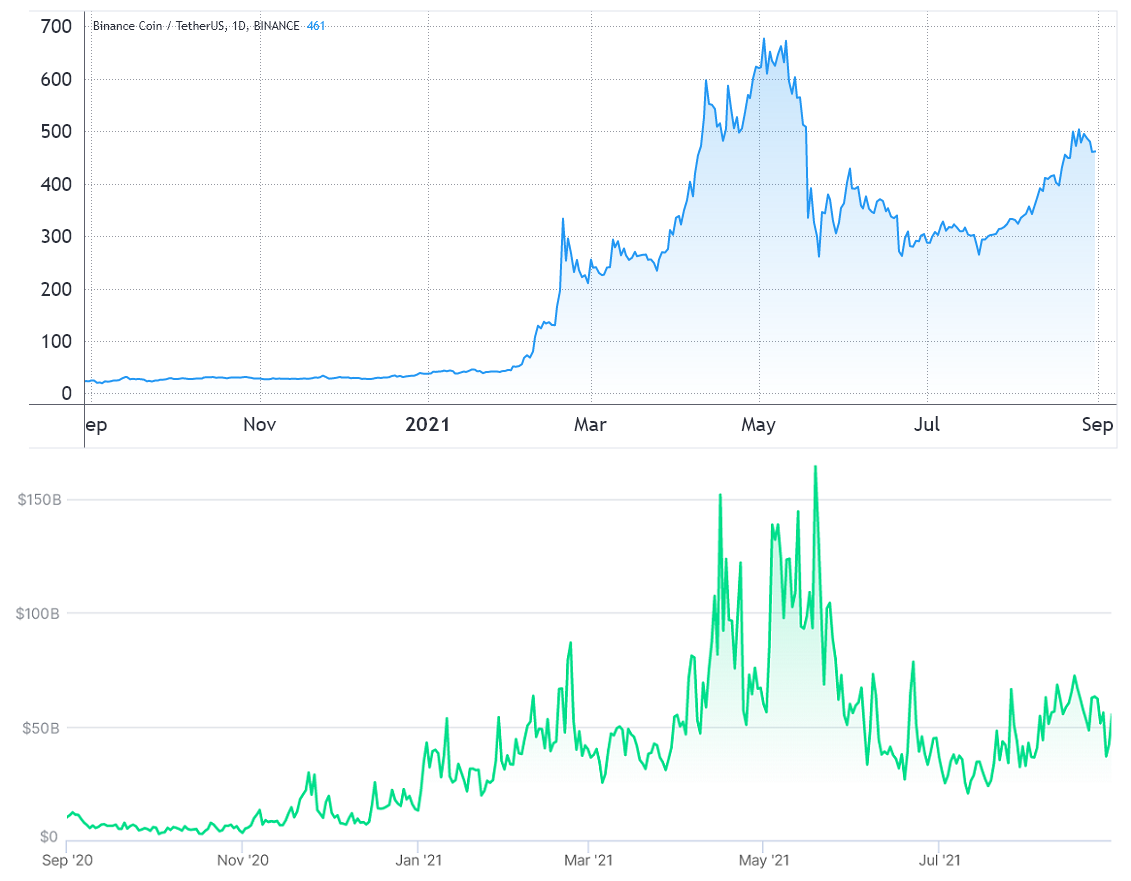 BNB price (above) and Binance exchange daily volume (below). Source: TradingView and Nomics

How BNB differs from the other exchange tokens

BNB has an actual use case apart from trading fee rebates, and it is the primary asset pair on the Binance Smart chain. BNB captures a portion of the $17 billion total value locked in the BSC smart contracts, and it has decent market share and representation on decentralized exchanges. As a result, the network creates perpetual demand for BNB.

Based on these simple figures, should analysts discount BNB's value by 50% compared to other exchange tokens? As mentioned earlier, the market appears to be pricing BNB based on Binance exchange's volume, and thus it makes sense to use that as a valuation proxy.

Uniswap has been averaging $1.63 billion daily volume, although it offers exclusively spot markets. Hence, the figure is comparable with Binance's $24.3 billion average, not factoring derivatives markets.

PancakeSwap, the leading Binance Smart Chain's DEX, has been handling a $750 million in daily volume. Using the same 50% of BNB's market capitalization methodology, CAKE's estimated valuation should be $4.73 billion, which is surprisingly in line with the current figure.

FTX and SUSHI are trading at a discount

Moving to a centralized exchange, FTX has amassed $1.7 billion in daily volume, including derivatives markets. Consequently, the indicator can be compared to Binance's $54 billion average. Despite its 96.8% lower volume, FTX's gross estimate valuation is $4.83 billion – 11% below the actual number.

It is worth noting that this estimate does not imply an investment recommendation. This unrefined and primitive methodology simply aims to show that traders are effectively using exchange volume as a proxy for native token valuation.

While this may have worked in the past, the current regulatory, KYC, and removal of leverage trading options at centralized exchanges could impact the efficacy of this analysis method in the future.