BTC/USD dropped from $9,527.65 to $9,477.50 in the early hours of Wednesday as bears took control, following a bullish Tuesday. The daily confluence detector shows that BTC/USD lacks healthy support levels, so further price drop is possible. There is strong resistance at $9,545. 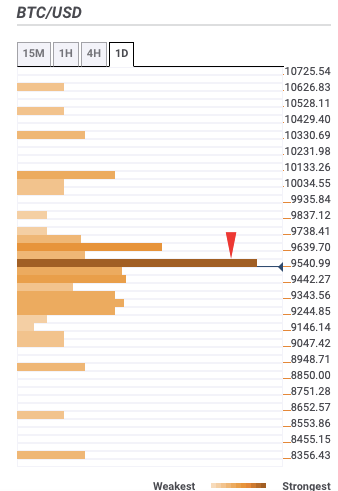 XRP/USD fell from $0.1925 $0.1916 this Tuesday as the bears stepped in to correct the market following a bullish Monday. The MACD shows sustained bearish momentum, while the Elliott Oscillator has had a green session after five consecutive red sessions.

ETH/USD dropped from $235.40 to $234 in the early hours of Wednesday following a bullish Tuesday. The price is sandwiched between the SMA 20 and the upward trending line. The 20-day Bollinger jaw has narrowed, which indicates that overall price volatility is decreasing. The Elliott Oscillator has had seven straight red sessions, showing sustained bearish sentiment.

Solana (SOL) price has successfully broken out of the descending top line that was keeping  SOL price trapped below $200. The breakout rally began  at the level of the 50-day Simple Moving Average (SMA), a level which has provided support on several previous occasions.

Terra money ecosystem got its first play-to-earn game Flokiverse that offers passive income to players.Over 100 projects are lined up for launch on the Terra network, a new wave of TeFi. Proposal 128, to initiate IBC on Terra, has passed; DeFi interchain highways for Cosmos ecosystem have arrived.

Implementing a burning policy triggered the “Triple Halving” in Ethereum, driving a supply shortage of Ethereum in circulation. In a similar way, Binance proposes to burn Binance Coin in every transaction.