In the last 24 hours, The Cryptocurrency sector suffered a sharp selloff, led by Bitcoin (-7%) and XRP(-6.6%). As happened in other occasions, the move happened very fast, within five minutes from 12:40 to 12:45 on Wednesday on a substantial volume spike. The selling sentiment was similar on all cryptos, as can be seen in the Heat map.

The market capitalization of the sector fell 7% to $202.876 billion, which shows the extent and homogeneity of this drop. The dominance of the Bitcoin moved little,  to 65.53%, which shows the leading cryptos descended similarly, percentwise. We see also that the drop was a sharp panic decline, instead of steady descent. 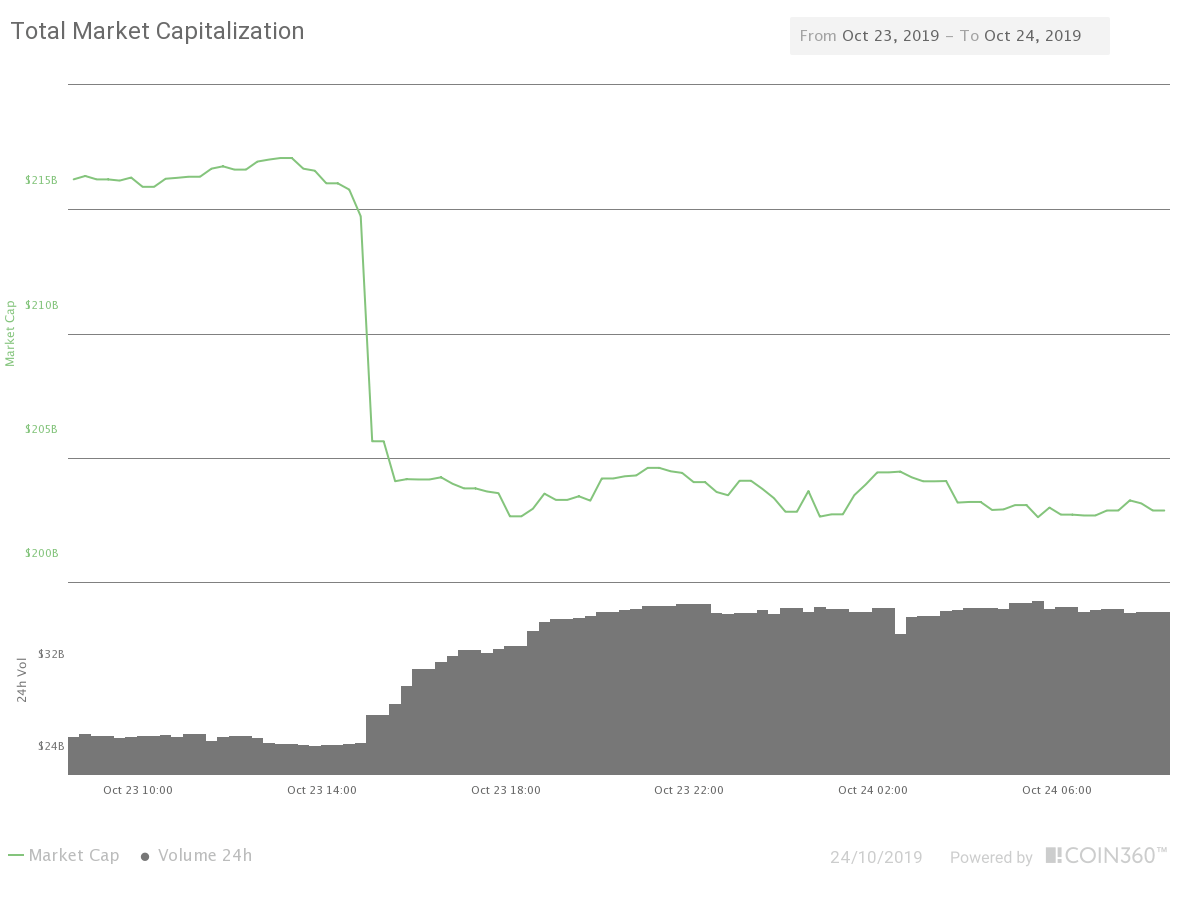 There were no news events that could have triggered this selloff, but Zuckerberg's testimony before the US House of Representatives Financial Services Committee.

"A project like this could be important for extending America's financial leadership, contrary to the risks that are being pointed out." - Said Zuckerberg. 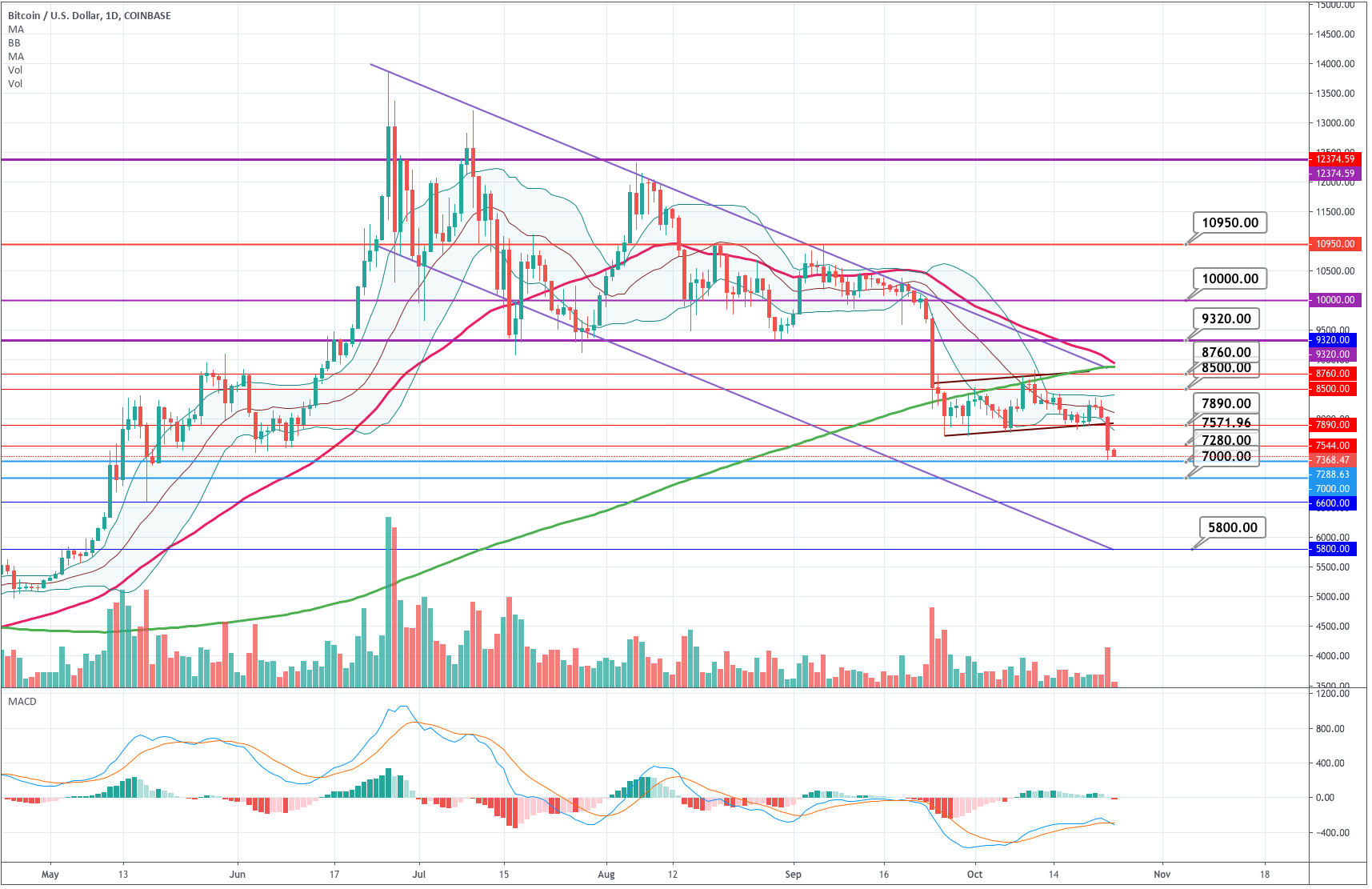 Bitcoin dropped in a sharp 5-min spike that drove the price down to $7,455. On the daily chart, we can see BTC broke down the parallel channel in which it was moving and is possibly headed to a visit of the lower side of the descending channel. We see that the MACD has made a crossover to a bearish phase in its negative side, which is indicative of a continuation of the primary trend. 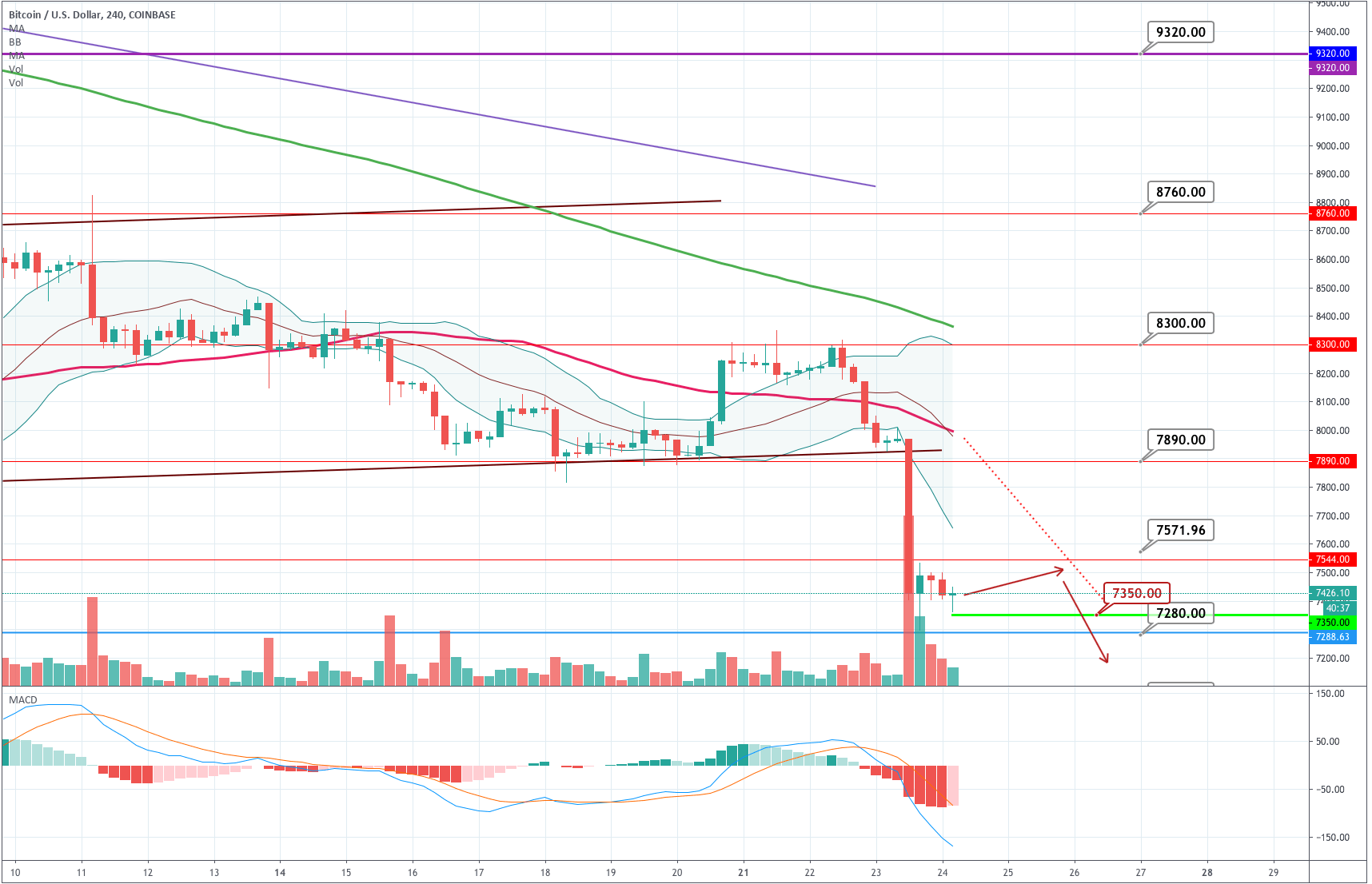 The 4H chart shows the price is too overextended due to the sharp spike. That means BTC needs time to digest the move and create a more solid consensus price before continuing, by moving towards the Bollinger mean line. 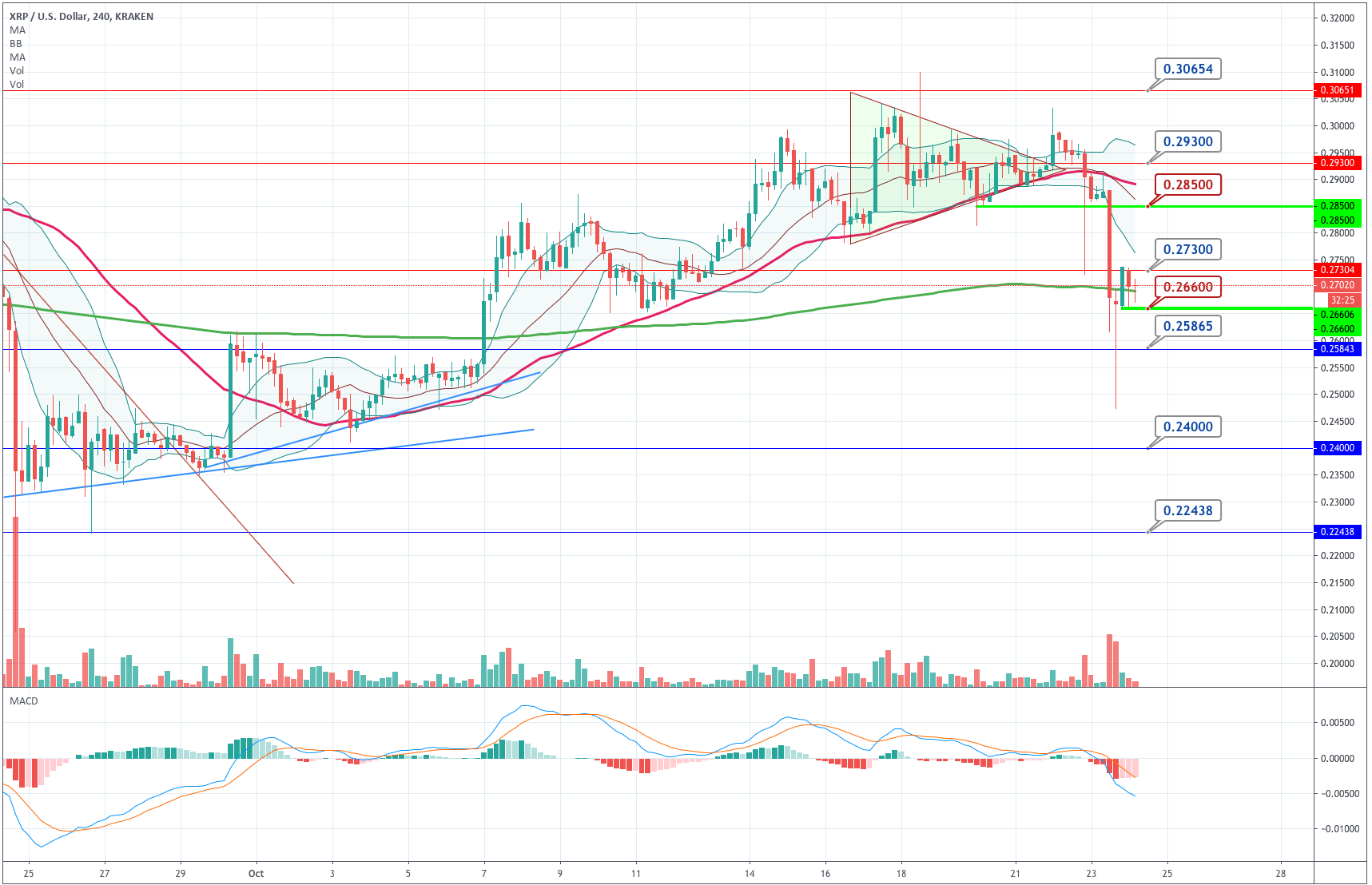 Ripple has definitively broken to the downside the triangular formation, after a fake up-break. After passing through the 0.285 support, the price made a couple of spikes before stabilizing the price below the 0.273 level, which acted recently as resistance, rejecting the attempt of buyers to push it beyond that level.

Technical indicators are bearish, although the price is trying to stabilize and moves horizontally to get out of the oversold condition.

The level to observe to spot the beginning of the next leg down is 0.266. 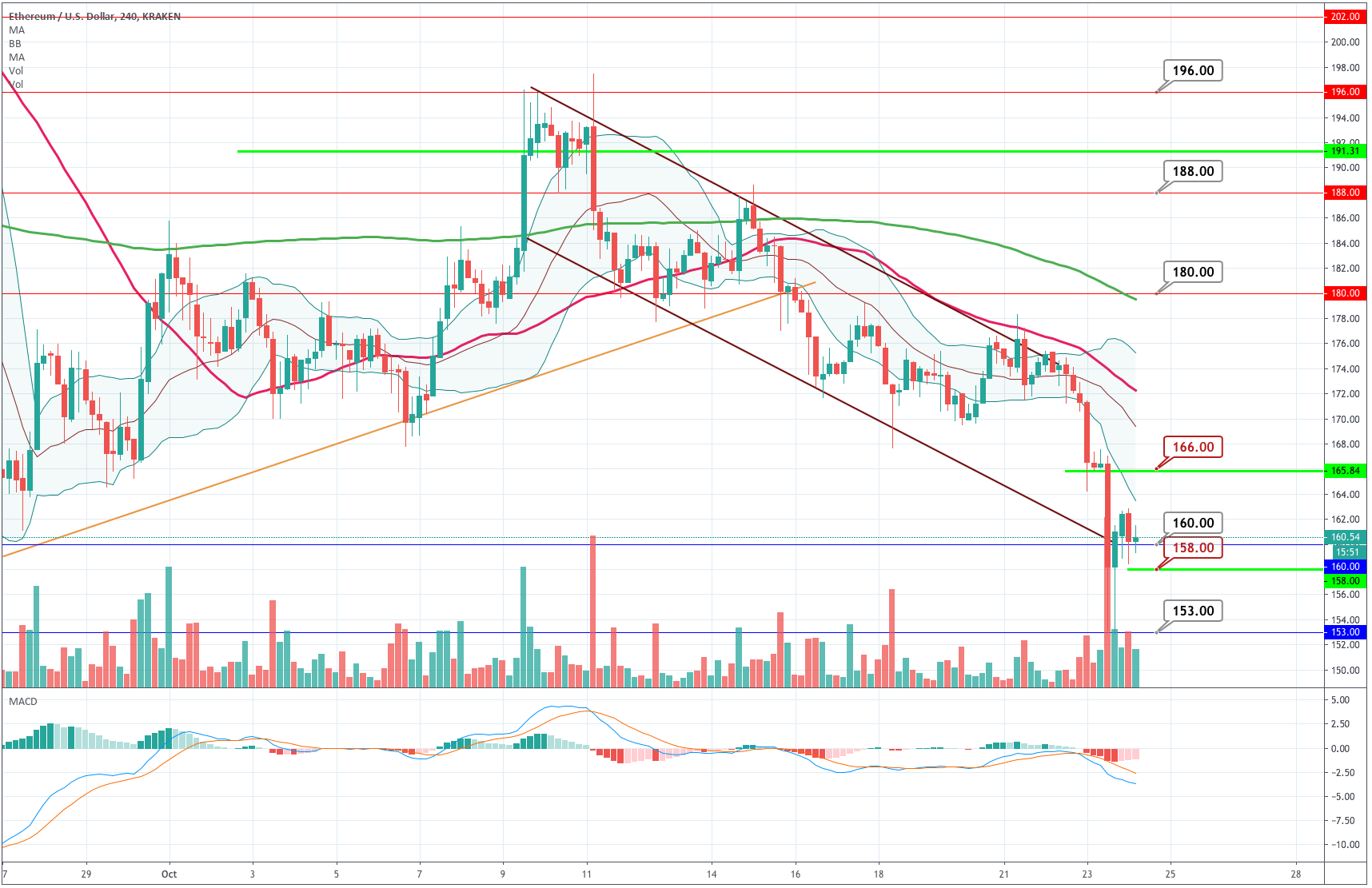 Ethereum, after its sharp movement, made this Wednesday, bounced off the $153 support and now is sitting slightly above the $160 level and touching the lower side of its descending channel. The price is oversold, and it seems willing to stabilize moving along the $160 support level.

The price outlook is bearish, as is moving below its 200 and 50-period MA, and also well below the -1SD Bollinger line.

The level to observe for the detection of the next downward leg is  $158.