Jeremy Allaire made the promise at a time when investors have been demanding more transparency around USDC.

With his company on the cusp of going public, Jeremy Allaire – CEO of Circle, operator of USDC, the world’s second-biggest stablecoin – has vowed to make his company “the most public and transparent operator of full-reserve stablecoins in the market.”

He has a ways to go.

​​Circle announced Thursday that it is listing on the New York Stock Exchange via an acquisition by Concord, a special-purpose acquisition company, or SPAC, led in part by former Barclays CEO Bob Diamond. The deal values the crypto financial services firm at $4.5 billion.

After the announcement, Allaire wrote in a tweet that the transformation from a private to a public company “creates an opportunity for Circle to also provide significantly more transparency about the business we are building around USDC, and about the reserves that back USDC.”

3/6 As part of our transformation from private to public company, that also creates an opportunity for Circle to also provide significantly more transparency about the business we are building around USDC, and about the reserves that back USDC.

Allaire made the promise at a time when a growing number of commentators have called for greater insight into the assets backing stablecoins like Tether’s USDT, the largest in the cryptocurrency category with about $63 billion of assets. No. 2 USDC has grown to about $25 billion outstanding from less than $1 billion a year ago.

Regulators and industry analysts have warned that a loss of confidence in stablecoins could destabilize cryptocurrency markets and potentially even spread to Wall Street.

The issue could take on even more significance if Circle’s projections for its own growth prove accurate: In a presentation Thursday, Circle executives estimated that USDC in circulation could more than double to $83 billion next year and reach almost $200 billion by 2023. 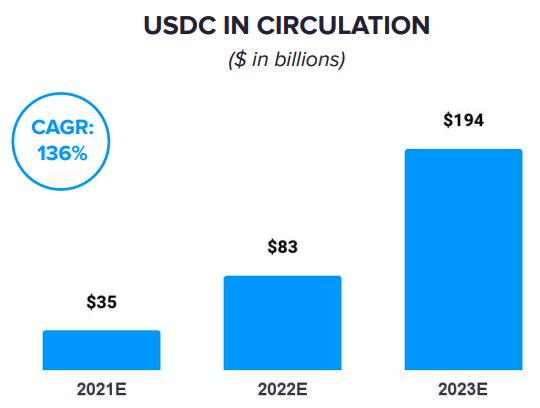 The presentation mentions the word “reserves” only once – to point out that USDC earns “interest income on reserves.”

Circle did include the following line in fine print in a list of “risk factors” on page 45 of the 46-page presentation: “We have obligations to safeguard the assets of our customers, and any failure to do so could negatively impact our business and result in liabilities, regulatory enforcement and reputational harm.”

The company has been issuing monthly “attestation” reports on its assets since 2018. According to those reports, it had been holding all of its customer funds in federally insured U.S. banks until the end of February 2020. In its subsequent attestation report for the month ended March 31, 2020, Circle added the category “approved investments,” without specifying what those were.

Despite mounting inquiries from investors and the media, Circle has not disclosed breakdowns of the “approved investments” or the amount held in them.

During an interview with CoinDesk TV on June 30, Allaire didn’t directly answer questions on what the investments were, though he said there’s a “very narrow set of permissible financial instruments that are able to be held” according to the law.

“If you look at it, it’s obviously cash. It’s, you know, government treasuries, those types of short-term instruments,” Allaire said. “We don’t break out the actual individual line items in USDC reserves, but what we do is actually publish exactly what we are required to do and we make it very clear that we are holding ourselves to an even higher standard.”

The pseudonymous blogger known as Bitfinex’d, a long-standing critic of tether and stablecoins generally, published a post on Medium on Wednesday chronicling the changes in how Circle has characterized its reserve assets.

Here's more stablecoin smoke and mirrors. USDC, this time. Circle's April attestation from Grant Thornton confirms that all USDC are backed by US dollars in "custody accounts". But.... https://t.co/VngnZ6HMiR

As CoinDesk columnist JP Koning pointed out, Circle is licensed as a money transmitter with 44 state-issued licenses, and regulations on the investment scope for such entities vary from state to state.

Texas imposed tighter restrictions for those entities to invest only in safe assets, while states such as New York and Connecticut allowed money transmitters to invest in commercial paper and preferred shares of publicly listed companies.

As the stablecoin market grows, it has drawn increasing concerns from regulators and experts for the potential impact on digital assets as well as on traditional markets like stocks and bonds. Stablecoins play a key role in the plumbing of the $1.4 trillion global cryptocurrency market. Traders use them to quickly move dollar value between exchanges in order to take advantage of arbitrage opportunities.

Some traders, analysts and economists have speculated that financial losses at Tether or other stablecoin issuers, or even a crisis of confidence, might trigger a sell-off that could put downward pressure on prices for other cryptocurrencies, including bitcoin.

“Stablecoins will never be as stable as dollars, physical or digital – and may even require a bailout when panic over broken promises spreads,” wrote Marcelo M. Prates, a CoinDesk columnist, central bank lawyer and researcher.

Fan Yifei, a deputy governor of China’s central bank, has voiced concern that stablecoins could pose a risk to the stability of the global financial system.

“I do worry that the stablecoin market that is currently, pretty much unregulated as it grows and becomes a more important sector of our economy, that we need to take seriously what happens when people run from these type of instruments very quickly,” Rosengren said.

Fitch, the bond-ratings firm, warned last week that the rapid growth of stablecoins could have implications for the functioning of short-term credit markets.

In May, the Federal Reserve published a survey of market contacts finding that brokerage firms, investors, political advisers and academics increasingly see cryptocurrencies and stablecoins as a threat to the stability of the financial system. Global regulators have been studying the potential risks from stablecoins since at least 2019. European Central Bank President Christine Lagarde echoed the concerns last year.