The Ultimate Fighting Championship (UFC) has announced plans to launch its blockchain-based fan token in partnership with CHZ. It is projected that 20 million of the UFC tokens will sell at Socios.com, an engagement and rewards app, presenting access to an array of perks for the holders.

Like other fan tokens issued by soccer teams in Europe and the recent partnership with the National Hockey League’s New Jersey Devils, the UFC token will offer exclusive content for fans and VIP rewards promotions, competitions and voting. The UFC identifies the token as a unique opportunity to engage their 625 million fans around the world.

“UFC has more than 625 million fans around the world, and Fan Tokens are a unique way to connect with them through a compelling, authentic product that brings them closer to UFC and gives them influence, while also rewarding their passion for the sport.”

The new token follows last year’s collaboration between the UFC and Chiliz, using Chiliz’s native token CHZ for fan rewards and experiences. It is a milestone, allowing fans worldwide to influence their favorite sport in a transformative way.

The IntoTheBlock In/Out of the Money Around Price (IOMAP) metric classifies addresses based on if they are profiting (in the money), breaking even (at the money) or losing money (out of the money) on their positions at the current price. It provides an aggregate view of profitability for a particular crypto asset.

Currently, the CHZ IOMAP metric shows sizeable resistance (out of the money) between $0.532 and $0.548, which coincides with the range of intra-days highs over the last four days. A total of 5.67k addresses bought 608.59 million CHZ at an average price of $0.539.

Likewise, there is a notable cluster of support (in the money) between $0.485 and $0.501, where 6.13k addresses bought 518.31 million CHZ, generating solid downside protection as Chiliz price oscillates in a lateral direction.

A head-and-shoulders pattern has a high probability of delivering superior returns than other technical patterns. It is one of the more complex patterns because it is the union of trend lines, support or resistance lines, and rounding.

In the current inverse head-and-shoulders pattern, due to the extension of the right shoulder, the symmetry of the pattern has been disrupted. In the IOMAP data above, there is an explanation for why Chiliz price has struggled to initiate a breakout above the neckline and why the digital token is moving in a tight range. 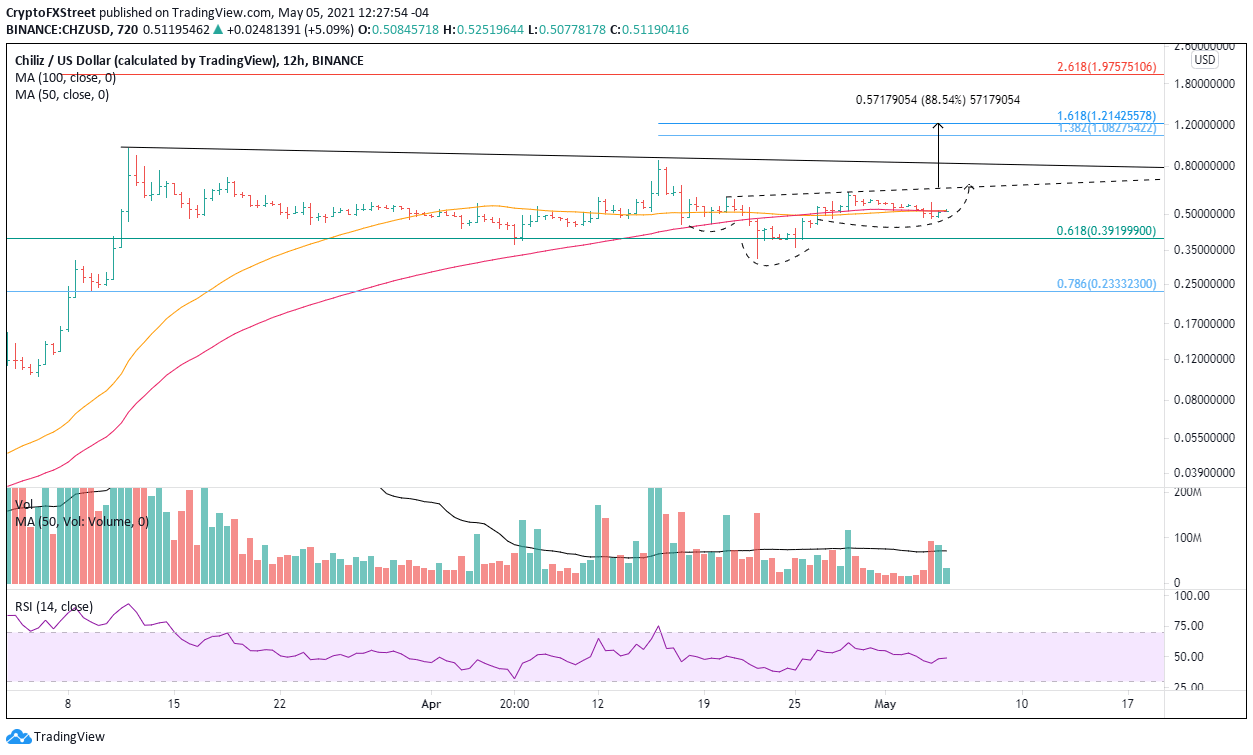