Cardano price action has been uneventful, following a 19% drop from the swing high on November 9. It appears that ADA is now trapped within a consolidation pattern with little incentive to reverse the period of underperformance. Further selling pressure could push the Ethereum-killer down toward $1.75.

Cardano price is sealed within a descending parallel channel pattern on the daily chart, confusing forecasts as ADA continues to consolidate. The token is currently discovering lower levels of support, with the first line of defense at $1.90, the September 21 low.

Additional selling pressure could see Cardano price drop toward the 200-day Simple Moving Average (SMA) at $1.87. If ADA loses this foothold and continues to lose strength, bears could be incentivized to push the token lower toward the October 27 low at $1.80.

Cardano price could descend even lower to tag the lower boundary of the parallel channel at $1.75 if the bulls fail to fight back. 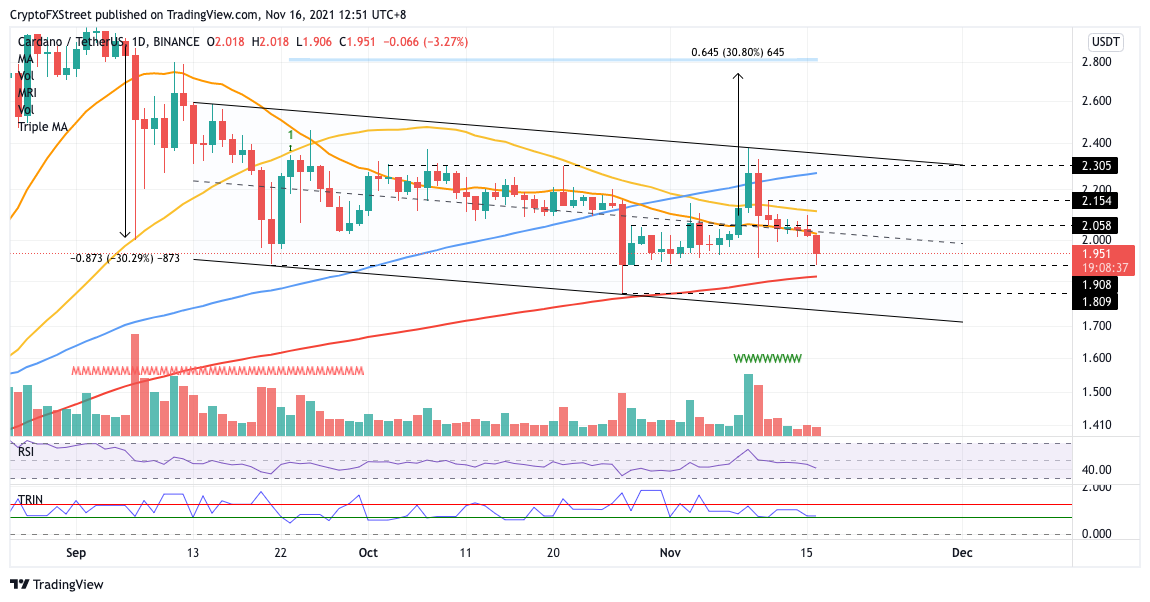 IntotheBlock’s In/Out of Money Around Price (IOMAP) model based on volume suggests that even if Cardano price is able to discover reliable support in the near term, reversing the period of underperformance may be challenging. The IOMAP indicates that ADA investors that are underwater are substantially higher than those that are in the money.

According to the IOMAP, the largest cluster of support is at $1.78, where 53,360 addresses purchased 850 million ADA.

However, if ADA bulls decide to reverse the period of sluggish performance, Cardano price would face immediate resistance at the middle boundary of the prevailing chart pattern at $2.02, coinciding with the 21-day SMA. An additional obstacle would emerge at $2.05, at the October 28 high.

The IOMAP suggests that the largest cluster of token holders with a total of 418,370 addresses purchased 5.59 billion ADA at an average price of $2.06, which acts as the stiffest hurdle for Cardano price in the near term.

If Cardano price manages to slice above the aforementioned resistance, ADA would face further headwind at the 50-day SMA at $2.11, then at $2.15, the November 11 high. According to the IOMAP, until the Ethereum-killer manages to break above $2.18, the token may continue to face tough challenges ahead, with little room for bigger bullish aspirations in the near future.