Cardano price takes on a significant hurdle as bulls continue to propel the altcoin higher. Unlike other barriers before it, ADA will need a massive surge in bullish momentum to overcome it.

Cardano price rose roughly 53% in the past two weeks from $0.776 to almost retesting the $1.20 resistance barrier. This exponential uptrend comes as BTC has flipped bullish on a shorter time frame, allowing altcoins to explode.

Regardless, Cardano price has sliced through the $1 psychological level and is currently retesting the $1.20 weekly hurdle, which is significantly tough to overcome. To make matters worse, this move comes after the Momentum Reversal Indicator (MRI) flashed a red ‘one’ sell signal on the daily chart four days ago.

Although this signal was invalidated, the rally that followed seems to be running on fumes and hence, a retracement seems likely. The $1.10 barrier is where ADA might pull back to before another uptrend originates.

In some cases, Cardano price might revisit the $1 psychological level before the next rally reaches for the yearly opening at $1.30. 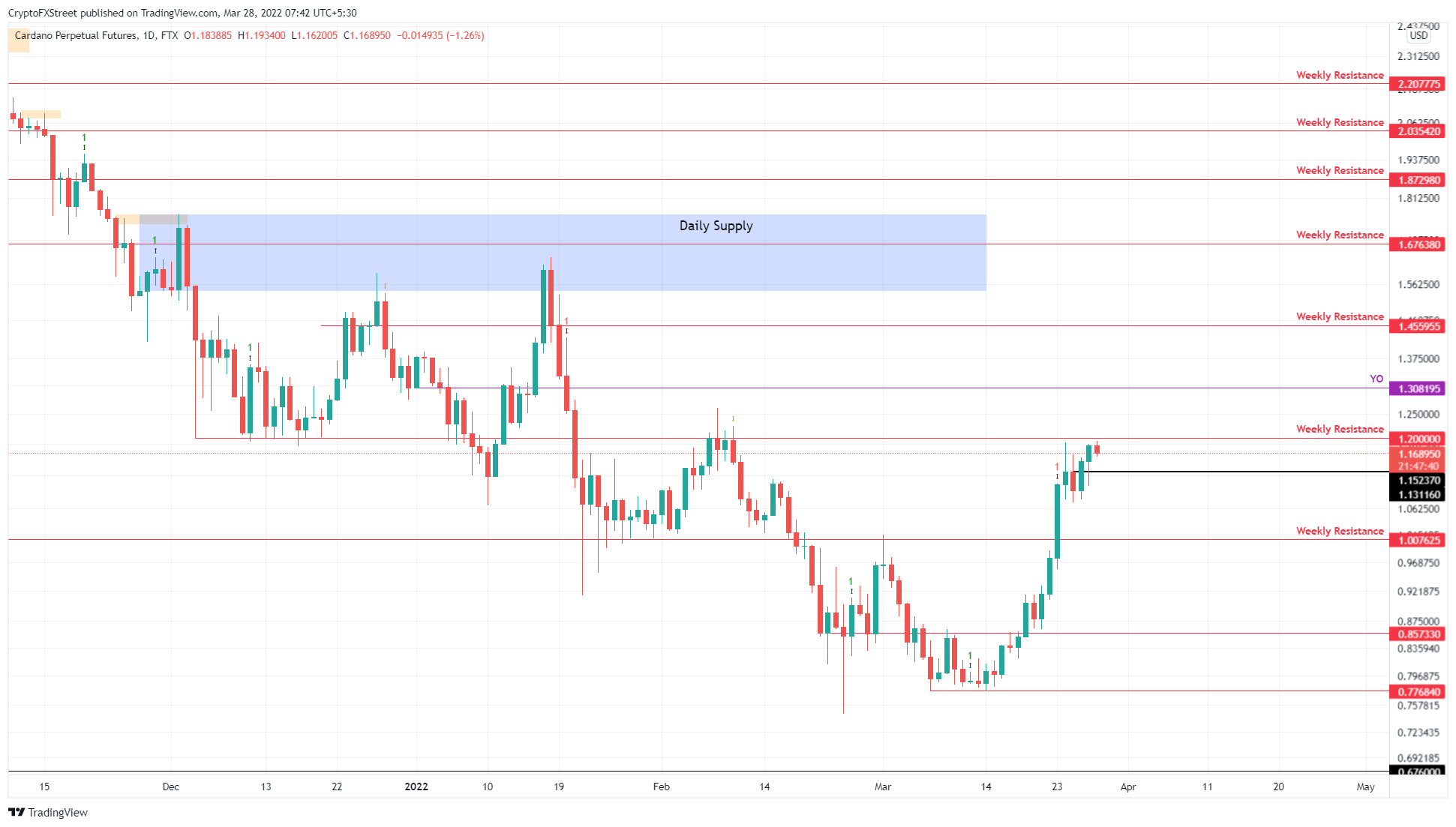 Additionally, IntoTheBlock’s Global In/Out of the Money (GIOM) model shows that a further move north seems unlikely for Cardano price due to stacked underwater investors. Roughly 620,000 addresses that purchased nearly 7.8 billion ADA at an average price of $1.23 are “Out of the Money.”

Similar hurdles are stacked beyond $1.20, indicating that bulls need a massive surge in momentum to overcome these blockades. Moreover, the immediate support level is relatively weak, further adding credence to the retracement thesis.

Further supporting the pullback for Cardano price is the 30-day Market Value to Realized Value (MVRV) model. This on-chain metric is used to determine the average profit/loss of investors that purchased ADA over the past month.

Currently, the 30-day MVRV is hovering around 22.5%, indicating that the many short-term holders are in profit and are likely to sell to realize their gains. Hence, an increased sell-side pressure is likely to trigger a retracement as explained from a technical perspective.

A daily candlestick close below $0.857 will invalidate the bullish thesis for Cardano price and open the path to retest further lows. In such a case, ADA might revisit the $0.776 support level, where buyers might make a comeback and give the uptrend another go.